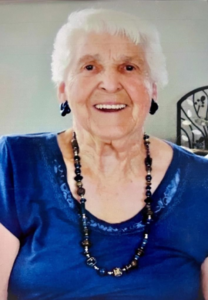 Marie Claire (Kuchenski) Purdy, our beloved Mother, grandmother, aunt, sister, cousin, friend, parishioner, classmate, card partner, bus driver and community contributor went to be with the Lord on November 26, at the age of 90. She was a resident of the Mountain View Manor for the past four years where she was living with a degenerative neurological disease called PSP (Progressive Supranuclear Palsy). While this awful disease slowly stripped her of her fine muscle control, it never took away her ability to love, pray, understand the game of cards, listen to audio books and best of all, know each one of us as we visited and shared with her the activities of our families and friends.

She was born May 11, 1931, in the Olsen house in Eureka, Mont.. She was preceded in death by her parents Felix and Zoa (Copp) Kuchenski, her husband David “Dale” Purdy, children, Patricia Jean (died at birth), Colleen Rae (Purdy) Stacy, Dorothy Marie (Purdy) Sharp and her brother James “Jim” Kuchenski and nephew, Michael St. Peter.

Marie lived on a homestead at the mouth of Big Creek where it flowed into the Kootenai River 25 miles south of Rexford.

Although, she grew up on the river, she did not learn to swim until after she was married and driving kids to the pool. Her mother worked for the Stonehill School district and her dad drove the school bus and as well as worked for the highway department. Her Dad tried raising silver tip foxes along with other ventures. She attended school at Rexford up to the third grade. After that she was bussed into Eureka, by-passing Rexford. She was 14 when her father passed away from complications after surgery for a double hernia. The family then moved to Eureka for work. In Eureka, Zoa kept books and Marie was active in school.

Her senior year in high school she was the President of the Girls Athletic Association, Student Body President, and Captain of the Twirlers. She had played 4 years of girls’ basketball. She was planning to attend college to become a stenographer. Later, she used her typing skills to type many papers for her children and in creating the beloved original Eureka Catholic Cookbook.

She was an excellent student and loved sports, especially outdoors ones. In High School, she also worked as a clerk at the Eureka Commercial dry goods store to help support her family. She took on an extra job with her mother and grandmother Jenny Copp at the Purdy Meadow Home Dairy when her soon to be mother-in-law Jane Ann “Jessie” was ill. At the Dairy, she met Dale. They were married in June of 1949, immediately taking over the dairy. Grammie made Grampie pack up the house and move to town while Marie and Dale were on their honeymoon.

She would host many meals for hordes of relatives, friends, and ranch helpers. She and Dale had 7 children in the first 10 years of marriage. She did a lot of doctoring, as well as, the normal duties of cooking and cleaning: usually for more than her own family.

Additionally, she kept the books and did the taxes. In those busy years, a set of twins joined the family for a total of nine children. Baby Patricia died at birth. She started driving a school bus for summer lessons at the age of 17 and later shared a route with her husband for extra income. They drove the bus on countless field trips and sporting events where she got to be with her children attending all their games. Her bus route was famous for popcorn balls on Halloween and Christmas. She always made extra for the extra passengers who knew the special treats were coming.

She was also a room mother volunteering in all their classes which was almost like a full-time job. She oversaw many school snacks. Even though she was an avid baker, she would send in nutritious snacks on occasion knowing that sugar was not going to help the learning opportunities.

Several of her children had undiagnosed dyslexia. She was very persistent in helping them with schoolwork and advocating for them so they could and would keep up in all subjects. Dairy life was not easy, and many nephews helped work the ranch, do the milking, and bottle washing twice daily; 365 days a year. Chores first, then church, then sports, then holidays, then more chores was just a way of life. In the early years, vacations consisted of getting the Schermerhorn boys to milk while babies were born in Kalispell, Dale breaking his leg (which saved his life), many Sunday drives and an occasional 3-day trip to Coeur D’ Alene to visit Dad’s brother and family.

She was a very active member of the Our Lady of Mercy Catholic Church, including running the infamous burger fair booth for many years. It is the church’s biggest fundraiser for the year helping fund church projects and outgoing donations. She was an active member and treasurer for the Cowbells, an organization of women in agriculture. The Montana Cowbells was started in 1952 to promote the beef industry through home economics programs in the high school, along with other community education programs in support of agriculture. She was an accomplished baker and seamstress. She took care of many; including other parents, in-laws and aunts and uncles. She liked to bake in the evenings when everyone was in bed. Her cut-up cake decorating, Halloween and parade costumes got better with every grandchild that came along. The first-place award came with her 10 Little “Grandchildren” Indians costume during the fair parade. She worked for the Mountain View Manor in the Laundry keeping all the clothes organized and matched with lots of care for 12 years.

She finally retired when they moved off the ranch in 1984 to the new house on the hill. Their son Joseph Purdy took over managing and working the ranch. Upon retiring she continued to host many parties, meals, and relatives. She became a volunteer at the Historical Village and passed on local knowledge to visitors.  She loved showing not only her grandkids, but also school children as they made their annual Historical Village on field trips the art of churning cream into butter.

She was the true definition of a very active member of the community. In 1978 she was given the Tobacco Valley Improvement Association Community Service Award.

Marie was not all work and no play. She loved planning picnics, playing pinochle with friends and family and at the Senior Center. She took up bridge in her 80’s. Some days she played Bridge and pinochle on the same day. Friday and Saturday night card parties, where she meticulously kept score, were definitely a staple throughout her entire life; even at the nursing home.

She finally got to travel once she retired. Donald and Martha shared their sense of adventure around the country and to Hawaii. Cousin Rosemary brought them to California. Virginia, her eldest, took her on an Alaska Inside Passage Cruise (Dad wouldn’t go) and to visit her ancestral homeland in the Czech Republic. She visited the Seattle area and made a few trips to Nebraska and Arkansas. She also went with a friend on a Caribbean Cruise because our dad wouldn’t go. She liked riding her bike, taking walks, (hiking to the top of Therriault Pass at age 64), had tried snow skiing, and water skiing. She usually had chili and hot chocolate ready for the many ice skating and sleigh riding parties held at the lake on the hill.

We all loved her fearlessness, sense of adventure, and independence. Her patience, love, kindness, and generosity of time and talents will truly be missed by many.

Memorial Services were held at Our Lady of Mercy Church at 11:00 a.m. on Monday, December 6.  A short graveside service with family will be at the Purdy Ranch, was followed by a reception in the Catholic Church Reception Hall.

Arrangements are by Schnackenberg Funeral Home in  Eureka.  Online condolences and memories may be shared at www.schnackenbergfh.com.