Edwin William Jewell journeyed to be with Christ on August 9, 2021.  Ed was his mother Edith Mae and
his father Ernst A. Jewell’s Christmas present, born on December 25, 1931 at their home in Havre, Mont.

He grew up on a farm and even rode his horse to
a rural schoolhouse until his brother Bob was in high school. Then they both
attended school in town.

He enlisted in the Navy July 1951 and served almost four years.

After his enlistment,
Ed returned to Northern Montana College to finish
his Bachelor of Arts degree
in teaching history with a minor in mathematics in 1957.

Furthering his education at University of Montana in Missoula, MT he received
a Masters of Education in 1961. His teaching degree landed him a job teaching high school math in Libby, Mont. in 1957.

Later on, he taught in
the junior high and served
as principal for McGrade,
Asa Wood, and Central
Elementary Schools.

The biggest adventure was finding and pursuing a young school teacher who was dropped off at his front door, Martha M. Heinle.

They lived all but a few years in Libby raising their two kids. They also hosted a Chilean exchange student, Melvin Romero, in 1982-1983.

He always had time to listen to his kids even if he was busy.  Ed was involved in many activities in the
community: Red Cross,
Lion’s Club, working at the City Pool, lifesaving classes, Combined Campaign, etc.

Ed is survived by his wife of 59 years, Martha Jewell of Libby; son Ted Jewell, his wife Lynette, and their two daughters Elee and Ava of Libby, along with Ted’s stepdaughter Koni Coursien, and her three children; daughter Susan (Jewell) Sweet and her husband Frank of Airway Heights, Wash., their sons Cameron Sweet of Lacey, Wash. and Casey and Anna Sweet and their two boys, Cael and Jack, of Montgomery, Ala., and daughter Catie Sweet of Spokane, Wash. and many nephews and nieces.  He is also survived by his sister-in-law, Marleen Jewell, (brother Bob’s wife) of Great Falls, Mont.

In lieu of flowers, Ed would have appreciated gifts to your favorite charitable organization. 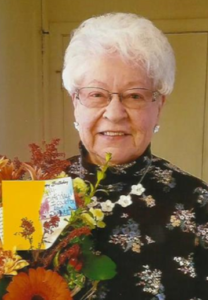 Marvel was a high school cheerleader for the Terriers before they became known as the Libby Loggers in later years. She worked various jobs in her youth including Miller’s Clothing Store, as a County Extension Agent and at First National Bank.

She met the “love of her life” Fred S. Thompson, while ice skating on a make-shift ice skating rink next to the Blue Bear Café in Libby.

Fred, being from Wisconsin, was mesmerized by her ice-skating skills and they began dating. Fred joined the Army Signal Corps and hitchhiked home from Las Cruces, New Mexico to marry Marvel in 1954. They then moved to White Sands Proving Ground where they lived until he was discharged from the Army in 1955.

They immediately returned to Libby as Marvel stated she had been terribly homesick.  Marvel remained devoted to her home community throughout her
entire life.

Marvel worked with Fred at the State Farm Insurance office for several years. She and Fred traveled extensively with Rotary International in Europe, Asia, Hawaii and the entire state of Montana.

She entertained friends and family often with stories of their travels.  Marvel and Fred were Libby Nordic Fest King and Queen in 2005 and she served as Nordic Fest Parade Marshal several years later. Marvel was involved in many volunteer organizations benefitting Libby throughout her life.

Marvel was preceded in death by her husband, Fred, in 2011; her two brothers Darrell Leckrone and Glen Leckrone, Jr. both of Libby; and her adopted daughter, Judy Eby, who died in 2004.

She is survived by her son, Scott F. Thompson (Mary Karen) of Libby, her daughter Julie Ann Rose (Julie Woodley) of Tenn.; six grandchildren, and five great-grandchildren at last count.

Marvel always had a twinkle in her eye and was quick with a joke and a smile.  She will be greatly missed.

Arrangements are being handled by Schnackenberg Funeral Home in Libby.

Due to the current uptick of Covid-19, her memorial
service will be held at a later date.

Marvel was an avid lover of animals and a supporter
of KSPS.  We ask that a donation to one of those organizations be made in her memory if you so choose.

Online condolences and
memories may be shared at www.schnackenbergfh.com.

He was a loving, sweet and talented young man
with the whole world ahead of him when his life tragically ended.

Survivors include his mom Christy Prophet, stepfather, a brother, two sisters, a niece and nephew, and his grandparents who all adored him and miss him very much.

William we love you and know you are in the gentle arms of the Lord now and are at peace. I pray we all live with the same love, kindness and joy for life that you shared with us.

Services have taken place. Arrangements were
by Schnackenberg Funeral Home in Libby.

On Monday, July 26, 2021, Ralph E. Davis decided he couldn’t stand another Monday. It was an unplanned and  unexcused absence.

He had heard that there were great fishing streams up north, so he went fishing with his friends and family that have passed.

If there was anything going on, he was in the
middle of it. This caused
angry, confused, or amused parents, siblings, friends, animals, and even insects. He did steer clear of the ensuing mayhem by grabbing a fishing pole and pretending that he was fishing the entire time. People thought he was adorable.

Ralph’s teenage and early adult years were spent as a mechanic and in the logging industry around Troy.  He loved doing both. Luckily he didn’t have time to combine the two, or we would have had monster skidder shows.

Ralph’s main passions in life were Chevy trucks and women. He had great feelings for both and was sometimes slapped because of it. In his early years, he was instrumental in keeping the B.F. Goodrich employees busy with his smoked tire
replacements. He moved
up to clutch and brake
replacements, as he was a great consumer. At the age
of 23, he made the mistake
of getting into a vehicle with an intoxicated driver. He became a quadriplegic from
the accident.

Ralph’s time in a wheelchair allowed him to hone
his craft of humorous instigation. If you were ever drunk in his presence, you may have been a willing subject. He would always make sure that you thought it was your idea. Soberness and pictures from friends would bring some clarity, also the need for a good stiff drink and some apologies.

Ralph embraced the art of storytelling with our great uncle Homer T.  – their
humor and some moonshine could keep people in stitches for hours.

Ralph was loved by many. He had an infectious humor and described himself as a cranky, old, opinionated, heavily jaded, intolerant, easily irritable, emotionally withdrawn, “bottles almost empty” person.

He loved the area around Troy and all of his family and friends. He leaves behind his father BJ Davis; brothers Mike, Scot, and Rick; sister Charlynn; and numerous step-siblings, nephews,
nieces, great nieces,
great nephew, and a
sister- in- law.

Ralph wanted a
celebration, not a funeral. Please join us at the

Troy park by the duck pond for a pot luck on

Your favorite side dish and sense of humor is the price of admittance. Lawn chairs are advised. Please don’t drink and drive, as Ralph isn’t ready to see
anybody else yet.

You may have taken notice of the old man smoking his pipe while walking about Libby with his little companion, Riley, a black and white Boston Bull
Terrier.

Perhaps you found a compassionate listener to how your day was going. 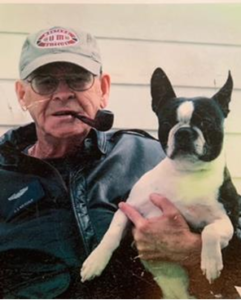 His constant companions throughout his life were his succession of Boston Bull Terriers. He was a lifelong bachelor. As a teenager, he delivered groceries for the Libby Mercantile.

When he turned 18, he went to work for J. Neils Lumber Company, retiring in 1997 after 47 years; he was a crane operator at the mill. Earl was a simple yet
complex man, truly without malice. He never said a bad word about anyone. He was vulnerable, kind, nonjudgmental and gentle. He loved life, his many friends –
especially his coffee group, his little house, his Boston Bull Terriers, fast cars (especially Corvettes),
old cars, smoking his pipe, chatting with anyone who would listen, watching old westerns, Louie L’Amour books, a good (or even not so good) joke, and finally – his family.

He really was a kid at heart. He was known about Libby for his walkabouts with Riley, stopping now and then to lean against a light pole or sit on a bench
to smoke his pipe. He truly loved Libby and he loved people. No one was more surprised than Earl himself when he passed away from COVID.

He was fully vaccinated. He caught it while recuperating from a fall in what
was hoped to be a short
convalescent stay at the Libby Care Center.

We thank the staff of
the Care Center who work tirelessly to provide care and comfort. We thank his neighbors who loved and cared for our Uncle Earl.

The family grieves not only Earl’s untimely passing due to COVID, but that the man who was so social,
who loved nothing more than coffee and chatting with friends, was forced to die alone because the Care Center had to shut down for visitation due to the many and still increasing active COVID cases. We are deeply saddened that Earl died alone.

We will remember
Earl’s childlike wonder and his playful smile. It has been said he was a Libby icon. Without trying, he represented the fabric and soul
of  “old” Libby.

In abundance of caution due to the rapid spread of COVID, his funeral will be held via zoom. Earl was a member of the Methodist Church.

Our friend and Libby United Methodist Church Minister, Karen Disney will officiate the family graveside service. Please share your stories about Earl – and we know they are numerous!

To share comments and those funny and heartwarming stories that we know are out there, just go to his
tribute page at: www.schnackenbergfh.com.

You are welcome and encouraged to electronically join the family graveside service via zoom at 11:00 am on Thursday, August 19.

The zoom link is: Earl Stanley Service. Or copy and paste the following in your browser:us02web.zoom.us/j/82239475363?pwd=Z0hZV2NzZllXTGtKL015NXFoOEh0Zz09

In Earl’s memory, the family asks that you please get vaccinated and wear your masks!