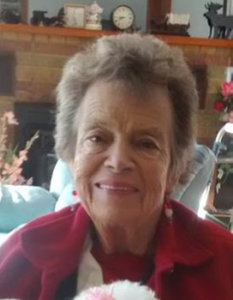 It is with heavy hearts the family of Wilma Countryman announces her passing on May 6.

Wilma was born September 7″, 1937 in Tom, Oklahoma to Bernice & Lee Roy Jones. Wilma tragically lost her Daddy in 1938 in McCurtain, Oklahoma when she was very small.

Wilma was a born again Christian and she loved the lord. Reflected by her genuine nature, she was caring & kind. To her family, her passion and love for others transcended from visits, sharing fond memories, and sharing treasure finds. She would return terms of endearment with sweet sentiments of “I love you more.”

Wilma especially loved babies, she loved to cuddle & smell them.  She always seemed to see the beauty in life and many efforts were put into making the world more beautiful. Wilma loved fresh paint, wallpaper, flowers, and beautiful works of art, anything to make the world happier and more beautiful.

She will forever be missed and loved.

She was also preceded in death by Marvin & Bernice Kates (Marvin was the only father she knew), her husband Byron Countryman, a sister Mackie Thomas & grandson Ryan Sannes.

Services were held in her honor at 11 a.m. on Monday May 9, at the Troy Baptist Church in Troy, Montana, Officiated by Pastor Cam Foote. Burial took place at the Milnor Lake Community Cemetery. Arrangements are by Schnackenberg Funeral Home in Libby.  Online condolences and memories may be shared at www.schnackenbergfh.com. 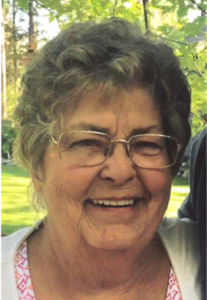 Kathleen Ann Evans Drake, 78, died on Saturday, May 14, at Logan Health in Kalispell, Montana. She was born on June 26, 1943 in Glendive, Montana to Robert and Kathryn Evans. She graduated from Dawson County High School in 1961. After high school she worked at the Wibaux County Courthouse, where she met David Drake. They married on September 14, 1963 in Wibaux, Montana. They had 2 daughters.

Kathy and David owned numerous successful businesses in Medicine Lake, Froid, Worden and Glendive, Montana.  After David’s death in March of 1999, she retired and moved to Libby, Montana. There she met Delbert Carr. She enjoyed bowling, gardening, needlework, dancing and loved to listen to Delbert’s band, The Country Legends.

She was preceded in death by her husband David, her parents and a brother.

Services where held at 11 a.m., Friday, May 20, with viewings at Schnackenberg Funeral Home in Libby.  An additional service will be held in Glendive/Wibaux Sunday June 26. Online condolences and memories may be shared at schnackenbergfh.com. 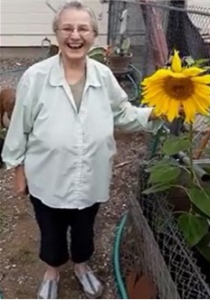 They moved to Libby shortly thereafter and Connie started working for the Kootenai National Forest, where she stayed for more than 30 years. Connie was also an avid pet lover and volunteered at Kootenai Pets for Life for nearly 20 years. She fostered and adopted many furry friends during her time at KPFL. Her son-in-law, Gus, noted how she always spoke about the Bow Wow Bashes , rummage sales and fundraisers she loved volunteering for and attend.

A Celebration of life was held  for Connie R. Holthaus May 22, at Fireman’s Park. about Connie.

She was preceded in death by her husband Bob Myrhang, June 1, 1989.

Gay loved crafting and living in sunny New Port Richey, Florida. She was a devoted wife and mother, and was very proud of her many grandchildren and great grandchildren.

Services will be at 11 a.m., on Tuesday, May 24, at the Schnackenberg Funeral Home in Libby.  Online condolences and memories may be shared at schnackenbergfh.com

“I say to you, love your enemies, do good to those who hate you, bless those who curse you, and pray for those who spitefully use you.  And just as you want men to do to you, you also do to them likewise. Love your enemies, do good and lend, hoping for nothing in return; and your reward will be great, and you will be sons of the Most High, for He is kind to the unthankful and evil.  Therefore be merciful, just as your father also is merciful.”  Luke 6: 27-28, 35-36

Our loving Husband, Dad and Papa, Jack L. Murer, went home to his Father on May 18. Jack was born to Marion “Cy” and Florence Nelson Murer in Kalispell, Mont. on July 12, 1940.

Jack married Diane K. McQueen on April 17, 1970, combining their families and adding two more.  They were married for 52 years.

Jack moved from the Flathead to Libby at the age of 18. He worked for St. Regis Lumber Company and Champion as a millworker and sawyer and was a sawyer for other Gypo logging companies, putting on countless mountain miles until his retirement in 1991.

Jack had a love of carpentry, music, the great outdoors and his family.  He built 4 local homes, 3 of which he lived with his family.  He loved helping his kids and grandkids with home remodels and other projects to which we are thankful for his beautiful perfectionism.  He was a master woodworker, building multiple items that he and his wife enjoyed selling at local craft shows.  His love of music started at a very young age with his father and siblings and continued through the years to present day, passing it on to his kids and grandkids.  He played guitar and sang locally with his own band and multiple other local musicians.  He was passionate about the outdoors; hunting, fishing, camping and working in his yard and garden.  If you had the time, he had many stories to tell about his hunting and fishing adventures with his kids and grandkids.  His main focus in life was that of his family, spending time with his wife, children and grandchildren.  He was always there, never missing an event in their lives, no matter how small.

Jack was preceded in death by his parents and only sister, Arlene Hill Hulford.

Jack was loved dearly by his family and friends; he will forever be in our hearts and never be forgotten.  To his children and grandchildren, he will always love you goobles and gobbles.