1551: National University of San Marcos, the oldest university in the Americas, was founded in Lima, Peru.

1935: Alcoholics Anonymous was founded when Bill Wilson and Dr. Bob Smith met for the first time in Akron, Ohio, at the home of Henrietta Siberling.

1990: NBC’s Saturday Night Live was broadcast with a seven-second delay for the second
(and so far last) time because producers wanted to bleep out anticipated profanity by guest host Andrew Dice Clay.

1939: The first commercial FM radio station in the United States was launched in Bloomfield, Conn. The station later became WDRC-FM.

1995: British mother Alison
Hargreaves, 33, became the
first woman to conquer Everest without oxygen or the help of sherpas.

2014: Unidentified shipwreck is discovered off the northern coast of Haiti by marine archaeologist Barry Clifford.

2019: New study on the moon shows it is still shrinking with recent moonquakes as it cools, published in journal, “Nature
Geoscience.”

1804: The Lewis and Clark
Expedition departed from Camp Dubois, near present day Wood River, Ill., and began its historic journey by traveling up the
Missouri River.

2009: The U.S. Mint issued the second of four new Lincoln
pennies. This design features a young Lincoln reading while taking a break from rail splitting in
Indiana. It was designed and sculpted by Charles Vickers.

1718: The world’s first machine gun was patented by James
Puckle, a London lawyer.

1817: The first private mental health hospital in the United States opened in Philadelphia. The Asylum for the Relief of
Persons Deprived of the Use of Their Reason is now called Friends Hospital.

1899: Inventor Gustav
Whitehead and his assistant
Louis Darvarich successfully flew the first airplane (powered by a steam engine) a distance of one-half mile in Pittsburgh.

1866: Congress eliminated the half-dime coin and replaced it with the five cent piece, or nickel.

1929: The first Academy Awards were awarded, in Hollywood, California.

1975: Junko Tabei became the first woman to reach the summit of Mount Everest.

2018: Gina Haspel confirmed as the first female director of the CIA by the US Senate.

2019: Tyler, the Creator,
releases his fifth studio album “Igor” which becomes his first number-one album in the United States. 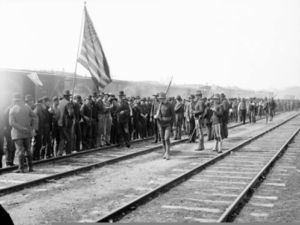 View of soldiers with civilians at railroad tracks.

The Butte contingent of the Coxey army got away at
2 o’clock Tuesday morning by stealing a Northern Pacific engine and train of coal cars.

The engineer asked for a clearance but the operator could not give any, so he said: “Well, tell ‘em we’re coming,” and pulled out.

About 300 men boarded the train. The “Coxeyites” reached Bozeman at 10 a.m. where they changed their
coal cars for box cars and requested the operator to tell
the boys down the line that they were coming.

At the Bozeman tunnel they were delayed until 6 p.m.
by a cave in, but they finally reached the Livingston yards where the men provided themselves with tools with which to repair the track should they find it torn up.

At the Billings yard, the army was met by a squad of deputy United States marshals and a fight ensued in which Hogan – the leader – was shot and
several others were seriously injured.

The marshals, however, were overpowered and their guns taken from them. The army then went east.

The president and governor have both been called on
to assist the railroad company to secure its property and punish the thieves.

A private dispatch received here Thursday morning stated that the U.S. troops had captured the train at Miles City and arrested the army.

Coxey’s Army was a protest march led by Ohio businessman, Jacob Coxey. The purpose of the march was to protest the unemployment caused by the Panic of 1893 and to lobby for the government to create jobs which would involve
building roads and other public works improvements, with workers paid in paper currency which would expand the
currency in circulation, consistent with populist ideology.

The march originated with 100 men in Massillon, Ohio,
on March 25, 1894, passing through Pittsburgh, Becks Run and Homestead, Pennsylvania, in April.

Some of the most militant Coxeyites were those who formed their own “armies” in Pacific Northwest centers such as Butte, Tacoma, Spokane, and Portland.

Many of these protesters were unemployed railroad workers who blamed railroad companies, President Cleveland’s monetary policies, and excessive freight rates for their plight.

The climax of this movement was perhaps on April 21, 1894, when William Hogan and approximately 500 followers commandeered a Northern Pacific Railway train for their trek to Washington, D.C. They enjoyed support along the way, which enabled them to fight off the federal marshals attempting to stop them.

Federal troops finally apprehended the Hoganites near Forsyth, Montana. While the protesters never made it to the capital, the military intervention they provoked proved to be a rehearsal for the federal force that broke the Pullman Strike later that year.