1924: In the second attempt to climb Mount Everest, George Mallory and Andrew Irvine disappeared, possibly having first made it to the top. (Mallory’s frozen, mummified remains were found on May 1, 1999.)

1934: Donald Duck made his debut in The Wise Little Hen.

1978: Leaders of the Church of Jesus Christ of Latter-day Saints overturned the 148-year Mormon church policy that
excluded black men from the priesthood.

2019: Ali Stroker becomes the first actress in a wheelchair to win a Tony award for musical “Oklahoma!”

1944: Fifteen-year-old Joe
Nuxhall of the Cincinnati Reds
baseball team became the youngest player ever in a major-league game.

1920: During the U.S. Republican National Convention in Chicago, U.S. Republican Party leaders gathered in a room at the Blackstone Hotel to come to a consensus on their candidate for the U.S. presidential election (Warren G. Harding), leading the Associated Press to first coin the political phrase “smoke-filled room.”

1944: USS Missouri (BB-63), the last battleship built by the U.S. Navy, and future site of the signing of the Japanese surrender, was commissioned.

1962: Frank Morris, John Anglin and Clarence Anglin become the only prisoners to escape from the federal prison on Alcatraz Island. No trace of them was ever found and they were presumed to have drowned.

2018: AT&T’s $85.4 billion takeover of Time Warner can go ahead according to US district court judge.

1893: President Grover Cleveland noticed a rough spot in his mouth, and on July 1 underwent secret, successful surgery to remove a large, cancerous portion of his jaw. (The operation not revealed to the U.S. public until 1917, nine years after Cleveland died.)

1777: The Stars and Stripes was adopted by Congress as the flag of the United States.

1789: Whiskey distilled from corn was first produced by an
American clergyman, the Rev Elijah Craig; the concoction was named Bourbon because Rev. Craig lived in Bourbon County, Kentucky.

1959: Disneyland Monorail System, the first daily operating monorail system in the Western Hemisphere, opened to the public in Anaheim, California.

1967: The People’s Republic of China tested its first hydrogen bomb.

1752: Benjamin Franklin flew a kite in a thunderstorm, proving that lightning is electricity.

1804: New Hampshire approved the 12th Amendment to the U.S. Constitution, ratifying the document.

1844: Charles Goodyear received a patent for vulcanization, a process to strengthen rubber.

1916: U.S. President Woodrow Wilson signed a bill incorporating the Boy Scouts of America, making it the only American youth organization with a federal charter.

1934: The Great Smoky Mountains National Park was founded in Tennessee and North Carolina 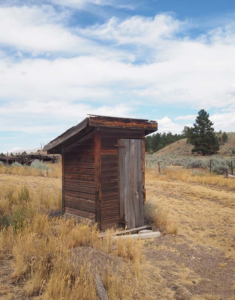 Not all outhouses deserve interpretive signs, but the Gehring outhouse is an important local reminder of
the U.S. government’s efforts in the 1930s to improve sanitation and public health in rural areas. Part of
President Franklin Delano Roosevelt’s “New Deal,”
the Works Progress Administration (WPA) was
established during the Great Depression to employ vast numbers of jobless Americans and improve crumbling infrastructure. While the WPA is best known for
large-scale building and infrastructure projects, its
sanitation program was far reaching, with some 2.3
million outhouses built across the nation. These WPA outhouses remain easily recognizable, as they are all identical. The WPA provided the plans and labor, and
the property owner provided the materials. On the
outside, the plan dictated a four-foot-by-five-foot wood frame, an overhanging shed roof with a wide fascia board, and wood siding. Inside, a six-foot-deep concrete-lined vault held waste safely, and the concrete
foundation and integrated molded concrete pot made
it easy to keep clean. Last but not least, each outhouse had a square wood pipe to direct polluted air from the pot to the outside.