1941: The National Gallery of Art in Washington, D.C., was officially opened by President Franklin D. Roosevelt.

1948: Benelux, France, and the United Kingdom signed the Treaty of Brussels, a precursor to the North Atlantic Treaty that established NATO.

1850: American Express was founded by Henry Wells and William Fargo.

1965: Cosmonaut Alexey Leonov left his spacecraft, Voskhod 2, for 12 minutes, to become the first person to “walk” in space.

2010: A rare Sumatran tiger was born in the Sacramento Zoo, California.

1931: Gambling was legalized in Nevada.

1987: Televangelist Jim Bakker resigned as head of the PTL Club due to a sex scandal. He handed over control to Jerry Falwell.

1854: The Republican Party of the United States was organized in Ripon, Wis.

1916: Albert Einstein published his general theory of relativity in Germany.

1922: The USS Langley (CV-1) was commissioned as the first U.S. Navy aircraft carrier.

1948: The first TV broadcasts of classical music in the United States, under Eugene Ormandy and Arturo Toscanini, were given on CBS and NBC.

1963: The Beatles’ first album, Please Please Me, was released in the United Kingdom.

1983: President Ronald Reagan made his first proposal to develop technology to intercept enemy missiles from outer space, a.k.a. Star Wars.

1989: Stanley Pons and Martin Fleischmann announced their discovery of cold fusion at the University of Utah.

1989: Stanley Pons and Martin Fleischmann announced their discovery of cold fusion at the University of Utah.

Fannie Sperry was born in the Prickly Pear Valley in 1887. Her mother taught her to ride almost before she could walk.

Soon she was rounding up wild horses and participating in neighborly competitions with
other local ranch kids.

She made her first professional ride as a
relay racer at the 1904 Montana State Fair in Lewis and Clark County.

Fannie and the popular Montana Girls rode relays throughout Montana and the Midwest in 1905. In 1907, Sperry began participating in women’s bucking horse competitions.

At the Calgary Stampede in 1912, her ride on the bronc Red Wing earned her the title “Lady Bucking Horse Champion of the World.” She won the title again in 1913.

Unlike most other bronc-busting women of the time, Fannie Sperry rode “slick.” Female
contestants usually rode hobbled, the stirrups tied together beneath the horse’s belly for greater stability in the saddle.

Hobbling was dangerous in the event of a
tumble because the rider could not kick free, yet slick riding demanded extra balance and strength.

Sperry married bronc rider and rodeo clown Bill Steele in 1913, and she rode exhibition broncs until she was in her fifties.

She was the first woman in Montana to receive a packer’s license, and with her string of pintos, she guided
hunters on trips into the mountains.

Widowed in 1940, she continued to run the family’s Helmville ranch until she was seventy-eight.

Among the 266 members, thirty-three are women and only twelve rode broncs. A quintessential Montana woman, Steele takes her place among the best of the best. 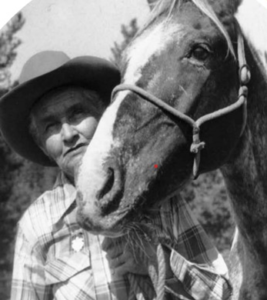