1903: Richard Pearse allegedly made a powered flight in an early aircraft in New Zealand.

1519: Hernán Cortez of Spain introduced smallpox to the Aztec Indians of Mexico.

1789: Meeting in New York City, the United States House of Representatives held its first quorum and elected
Frederick Muhlenberg of Pennsylvania as its first Speaker.

1865: Confederate President Jefferson Davis and most of his traitorous Cabinet fled the Confed-erate capital of Richmond, Va.

1917: President Woodrow Wilson asked the U.S. Congress for a declaration of war on Germany.

1968: Martin Luther King Jr. delivered his “I’ve Been to the Mountaintop” speech in Memphis, Tenn.

1981: The Osborne 1, the first successful portable computer, was unveiled at the West Coast Computer Faire in San Francisco.

1818: Congress adopted the flag of the United States with 13 red and white stripes and one star for each state (then 20).

1859: The song “Dixie” had its debut by Bryant’s Minstrels in New York City in the finale of a blackface minstrel show.

1873: The Kennel Club was founded in London, the first and oldest official registry of purebred dogs in the world.

1947: The first Tony Awards were presented for theatrical achievement at the Waldorf Astoria hotel in New York City.

1965: “Early Bird,” the first communications
satellite to be placed in geosynchronous orbit, was launched at Cape
Canaveral.

In celebration of Women’s History: 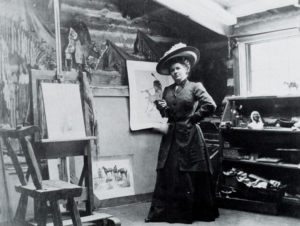 Nancy Russell was a woman ahead of her time. A self-taught busines woman with the propensity to take charge, Nancy helped Charlie Russell become the highest paid living artist of his time.

Under Nancy’s guidance, the Russells traveled extensively, exhibiting his artwork in major cities across the United States as well as Canada and London.

While Charlie’s paintings vividly captured the waning days of the mythical Wild West, much of the inspiration for his remarkable art came from the natural landscape of Montana itself.

In 1905, the Russells bought land in what would become Glacier National Park.

Thereafter, they spent every summer for the next twenty years at the cabin they built on the shores of Lake McDonald, entertaining friends and prominent artists of the day, exploring the park, and reveling in the rugged beauty of the mountains.