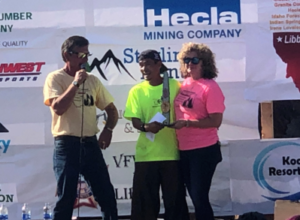 Top left: This year’s second place masterpiece chainsaw carving by Dayton Scoggins of  Mississippi. Scoggins won a trophy and $3,000 to take back to Mississippi. His piece sold for $4,500 during the final auction, and he also won first place in the People’s Choice category earning him an extra $1,000.

Top center: Takao Hayashi accepts his trophy and a $5,000 check after being named grand champion of this year’s Kootenai Country Montana International Chainsaw Carving Championship. Hayashi hails from Japan and he carved characters from Disney’s The Lion King movies (below).

Top right: This year’s third place carving of a papa bear backpacking with his cubs created by Steven Higgins of Missouri. Higgins was the event grand champion two years ago. This year he also took second place in the People’s Choice category and he was named quick carve champion with his quick carve sculptures bringing in the most money during auctions. Higgins told the crowd to always pick up pennies found on the ground. “It works,” he said, he is attracted to money and money is attracted to him.

This year marked Kootenai Country Montana’s third annual International Chainsaw Carving Championship. The event was held at the corners of Mineral Avenue and Second Street from Thursday until Sunday, Sept. 12-15 in Libby.

Paul Bunn, founder of Kootenai Country Montana told The Montanian, “It was the finest carving that we’ve done, and one of the finest ever done anywhere in the world.”

Twenty-two master carvers from around the country, and around the globe, participated in the event  along with about 20 staff members keeping things organized, and a crowd of spectators estimated at over 1,000 people who enjoyed watching chainsaw art come to life.

Each chainsaw artist created one masterpiece carving and participated in three quick carve events as well. In total, they each had approximately 20 hours to complete their masterpiece carvings and 90 minutes for each of three quick carve events. Event attendees were able to watch their progress and purchase one-of-a-kind pieces ranging from $15 to $5,000.

Carver Coordinator, Steve Backus, a second generation carver himself, said, “In three short years we’ve gone from a dead stop to one of the best events in the world. It’s the place to be now, and the big dogs want in. This result is remarkable and it has taken the backing of someone like Paul Bunn to get us here.”

Carvers are attracted to the event, he said, because they have a chance to win large cash prizes , they are provided with food, shelter and travel expenses, and they get to keep half of the money earned from auctioning their quick carve items as well as 70% of the sale price of their masterpieces.

“This is as good as any competition, plus the reception here is just great,” Backus said.

Bunn plans to continue the event annually for many years and he thanked the community for their ongoing support.

See the photo captions below for event winners.

Submitted by Trademark Women of Distinction

Angela McLaury has been selected for inclusion in the forthcoming Trademark Women of Distinction Honors Edition publication for demonstrating dedication, leadership and professional excellence. Her compassion and expertise set the standard in the industry.

Trademark Women of Distinction Honors Edition is a trusted resource and tool dedicated to highlighting the professional accomplishments and stories of today’s best and brightest women in business.

McLaury owns and operates McLaury Apiaries along with her family. They raise honey bees, harvest honey, make candles from the wax and travel extensively to pollinate crops.

Representing the state as one of the best in the country requires talent, experience, and integrity. There is humility and personal touch she adds to her relationship with everyone she does business with, more than the value of her service it’s her way of treating everyone like an extended member of her own family that people remember the most.

As a talented disciplined professional, she has maintained a proven track record of quality service, driven by her desire to succeed. During the vetting process it was noted along with her exceptional reputation, that she has also maintained a positive peer rating. Her years of service along with her level of expertise and several other factors also contributed to her inclusion. She prides herself on honesty and integrity. She is the kind of professional admired by colleagues and peers alike. Her kindness and willingness to always help others and find solutions to most questions is both exemplary and honorable. She has made her mark on her profession as an expert and will become part of history as one of the top professionals in her field.

Trademark Women of Distinction membership provides these hard-working accomplished women with a certification and validated third-party endorsement of their accomplishments and serves as a way to spread the word about their success through a trusted network of women brought together by the same common morals, values and dedication.

The Kootenai Heritage Council invites community members to join them for a 2019-2020 season series kickoff event on Saturday, Sept. 21 at 6 p.m. at the Memorial Center.

The kickoff event is free to attend, and drinks and snacks will be provided on the house. Guests will enjoy a review of upcoming season series performers, and they will be  delighted by a short performance of Karina Hancock’s local dance students.

Season series passes will be available at $50 for all five events.

The Kootenai Heritage Council is a nonprofit organization run by a volunteer board of directors including President, Gary Huntsberger, Vice President, Lorraine Braun, Treasurer, Noelle Gilmore, and Secretary, Alyssa Ramirez.

During last year’s season, nearly 700 people attended season series performances, and all artists that perform at the Memorial Center also provide at least one outreach program in our communities serving over 1,500 students and teachers with knowledge and experience about performing arts.

Volunteer and sponsorship opportunities are available, and you can also support the Kootenai Heritage Council by attending a Brews for Benefits fundraiser at Cabinet Mountain Brewing during the month of September. On Thursdays, throughout the month, $1 from every beer sold between 6 and 8 p.m. will be donated to support the cause.