As this past June came to a close, the heavily overgrown National Forest Service Trail 460 at Alvord Lake in Troy was cleared and reconstructed  by the Three Rivers Ranger District recreation, trail and YCC crews.  Their work part of several public land improvements  funded under the Great American
Outdoor Act Project this past summer.

Unfortunately, heavy smoke from several area fires would soon keep many from discovering in short order the fruits of their hard labor.  So what better time than fall to follow in the footsteps of these wildland stewards and enjoy the trails, wildlife and lakeside landscapes?

“The big thing about this project was that we made a completely new trail that branches off of the existing one,” shared Crystal Graham, YCC Crew Leader. “Ben Bernall went through with the mini-excavator and broke trail for us, then we came behind him and cleaned it and essentially made it pretty. Digging out stumps, raking, etc. Then bringing in what felt like thousands of wheel barrow loads of gravel. The fire crews came in and sprayed it down so when the kids used the whacker packer it would settle and pack down better. They placed the new fire and cook pits and did all of the rock work around everything.”

Those who know the area will find the old trail
is still there, but the front half is now handicap
accessible and the new trail which branches off also connects to the dock and the outdoor classroom.
Used by local schools, organizations, and public visitors, the improvements in tread and slope will now
be appreciated by many.

Work for the summer crews, however, stretched far beyond the Alvord Lake area.

If you live in town, you may have seen
them in the past couple of weeks. Two safety-vested figures poking around the trees in front or back, or even to the side of your house on the city’s right-of-way.

Looking closely at
the bark, at the leaves, at the dead branches, and whipping out a tape measure and measuring a trunk diameter, Karen Shelly and Blaine Doherty were here in Libby to count, catalogue and assess our trees.

Urban Forestry Program Specialist, Karen Shelly, works for the Montana Department of Natural Resources and Conservation (DNRC) Urban and Community Forestry Program. She studied geography at the University of Montana and has worked for the State of Missouri doing ecological inventories.

Karen leaves her
Missoula office to travel our magnificent state, checking and inventorying the bounty of beauty that is the urban landscape of Montana’s towns.

Her cohort, Blaine Doherty, is an avid birder and naturalist whose extensive experience working with plants and interest in permaculture landed him an inventory technician job with the DNRC. “A lot of what we do is just direct observation” Doherty said.

“We collect data on publicly-owned trees including the number and type of species, their condition, defects and insect infestations and make notes as to their maintenance needs. Maintenance could include pruning, watering, staking, and training young trees,” Shelly told the Montanian. “We typically look at more than 1000 trees every week throughout the growing season, update existing inventories, and give
the data and summary reports to the individual cities.”

Not all the trees are inventoried, but most
of the street trees and park trees are. Generally, they are documenting the  data on trees present
to help cities that don’t have an arborist or
urban forester on staff to
manage their community forest.

They also look for an overabundance of any type of tree. “The general rule of thumb is that we don’t want to see more than 5-10% of any one species, because that makes a higher percentage of the cities’ trees vulnerable if disease or insect strikes a particular species,” Shelly said. “Libby actually has a higher diversity of species than many Montana towns.”

The Kootenai Forest Stakeholders Coalition is proud to announce the first-ever Kootenai Forest Fair, taking place at Riverfront Park in Libby from 3-6 p.m. this Friday,
September 24.

The fair will feature booths from over 40 local and statewide groups ranging from local businesses to agencies to non-profit organizations. Attendees will be able to visit with and learn from local loggers, forest rangers, wildfire experts, wildlife biologists, and trails advocates.

“The fair is a chance to connect to our forest in a new way and learn about all the great work that folks are doing to support our forest
resources and communities,” says Allie Maloney, northwest Montana field director at Wild Montana.
“The forest gives us good jobs and incredible access to the outdoors, and I’m excited that we have this chance to learn more about everything that goes on behind the scenes.”

In addition to chatting with
exhibitors, Forest Fair attendees will have the chance to take photos with Smokey Bear, enjoy a free beer from Cabinet
Mountain Brewing, and win great prizes, including a unit of freshly milled 2x4s
generously donated by Idaho Forest Group. There will also be plenty of kid-friendly
activities and outdoor skills demos.

“This really is a fun way to bring the
community together and enjoy a great
afternoon,” says Bob Casteneda, retired Kootenai Forest Supervisor and current board member of the Kootenai Forest Stakeholders Coalition. “From timber to trails to hunting and fishing, our forest really
provides for us in so many ways, and we’re really looking forward to what should be a great afternoon.” 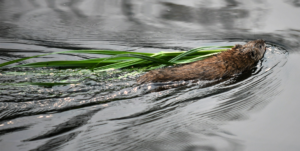 Beavers can weigh between 35 to 65 lbs. The heaviest beaver ever recorded was 110 lbs.

An average beaver’s length is usually from 3 to 4 ft long and 1 to 1.5 ft when standing.

Ponds that beaver dams create are important habitats for other wetland animals, including birds and fish. These ponds also help control soil
erosion and reduce flooding.

Beavers are a “keystone species.” This means they are important to an ecosystem because they modify, or change, their environment in a way that helps other animals and plants thrive.