The 2022 Libby Chamber of Commerce Annual Award and Fundraising Banquet  Game Night was held on Friday January 21 at the Libby Memorial Events Center in Libby, Mont.

Attendees enjoyed delicious food, catered by Smoking Gun BBQ from Libby and drinks served and made by The Halfway House Bar & Grill from Troy.

The Libby Chamber Award Winners are as follows:

City of Libby’s Employee of the Year – Christopher Pape

Congratulations to all award winning recipients.  Stay tuned in for photos of the 2022 Libby Chamber of Commerce Annual Award and Fundraising Banquet.

The Irish Fair is Back! In search of Vendors

The Irish Fair is back!!  Is fearr na go brach  (Better late than never).  After a year of waiting, the committee is pleased to offer lively music, delicious food and wonderful crafts at the Memorial Center.

This year’s celebration will be March 12 starting at 10:00 in the morning until 3:00 in the afternoon.   Venders will sell handmade crafts and goodies during the day.  Homemade Butte Irish pasties will be available to enjoy at the fair or to take home.

The music in the evening will be a Canadian band called The Fretless. They are a string music quartet that transforms fiddle tunes and folk melodies into high energy arrangements.  They share a completely new approach to folk music.  They have won numerous awards and have toured six times in Europe as well as in Australia, and in North and South America. 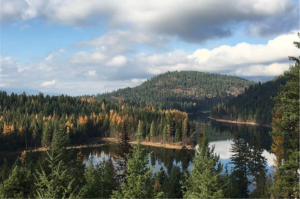 In the spring of 2017 the Vital Ground Foundation found its way into the American Tree Farm System by way of its property on Alvord Lake. The 142 acre Community Forest (CF) is located approximately two miles north of Troy and borders the southeast side of Alvord Lake. It is bounded by Kootenai National Forest to the west and Stimson Lumber Company lands to the north and east.  Vital Ground purchased the property in 2016 from The Friends of Alvord Lake through a variety of funding sources, beginning with a substantial grant from the Forest Legacy program and contributions by Vital Ground, Montana Fish, Wildlife and Parks and others.

The Vital Ground Foundation is a non-profit land trust with the primary mission to conserve and connect habitat for grizzly bears and other wildlife in the northern Rocky Mountains. They also team up with communities to prevent conflicts between bears and people. Vital Ground owns and manages both conservation easements and fee-title forestland holdings throughout western Montana and north Idaho. The Alvord Lake CF is managed through the collective effort of a number of groups and individuals such as the local ranger district office of the Forest Service, the Society of American Foresters, Montana Fish, Wildlife and Parks, and a number of other stakeholders. As a locally-based group, the stakeholders assist the foundation in implementing the community forest management plan.

Involvement with the Montana tree farm program will remain consistent with the mission statement described in the original management plan, as written for the Alvord Lake CF: That is “ to manage the property to improve and restore native forests as well as native plant species, to protect and maintain important fish and wildlife habitats, to continue and expand opportunities for outdoor education while also maintaining historical public uses such as angling, boating and dispersed recreation such as wildlife viewing and hunting”.

Vital Ground and its collaborators have initiated a number of management activities since the inception of the CF. Where appropriate, herbicides are being used to control weeds in a cooperative agreement with the Three Rivers Ranger District. Biological control insects that target root systems of spotted knapweed have also been released. Thinning of overstocked sapling sized trees through hand thinning and mastication has occurred on 125 acres. This thinning had the objective of creating more growing space for preferred species and increasing the resiliency of the treated areas. The financial support of a DNRC Landscape Scale Restoration grant has made much of this work possible.

According to the federal Gun Control Act of 1968, marijuana customers
— legal and otherwise —
are prohibited from possessing firearms

While marijuana became legal for adults to purchase in Montana on New Year’s Day, a key federal agency has confirmed a fact underreported in coverage of the state’s new marijuana program: It remains illegal under federal law for individuals to simultaneously possess marijuana or marijuana products and firearms, and penalties for violating that law are severe.

The Federal Bureau of Alcohol, Tobacco, Firearms and Explosives confirmed the policy to Montana Free Press last week, noting that the federal Gun Control Act prohibits a person who possesses a controlled substance from possessing a firearm or ammunition. Cannabis is currently recognized as a Schedule 1 Controlled Substance.

The question is complicated by a federal form required for purchasing a firearm. It asks the applicant, “Are you an unlawful user of, or addicted to, marijuana or any depressant, stimulant, narcotic drug, or any other controlled substance?” The form does not specify that even if marijuana is lawful in the applicant’s state of residence, it remains unlawful in the eyes of the bureau.

“Anyone who is currently using marijuana, whether for ‘medicinal’ purposes or otherwise, should answer ‘yes’ [on the form],” McCoy explained via email.