Between Monday January 31 and Friday February 3, carvers from across the country shredded the slopes of local Turner Ski Mountain Ski Resort in their unique and fantastic way during the 4th Montucky Clear Cut event.

This was put on “for carvers by carvers,” and largely organized by mastermind David Redmond. Carving is a winter sport involving a board that looks like a long snowboard, but the rider faces towards the front, instead of out from the side. The design allows the carver to execute wide, curvy turns all the way down the slope. Due to this large span though, there was a rule against passing other riders while going downhill to limit potential for collision and injury.

They prefer groomed trails, so a talented Brett Gensch came north from Jackson Hole, Wyoming to help the Turner groomer crew pave out some silky smooth corduroy across the trails. Board waxing stations were set up at the base, and participants could join classes designed to refine carving skills.

The event stimulated local Libby businesses, and it raised about $5,500 for the predominantly volunteer run Turner Mountain.

David Redmond commented that “This is the only event of its kind in the world. No other carving event has an entire mountain only open to participants.”

Trinity Hadam, a new member of the sport, shared about her time spent honing new skills during the week, “That was worth it just for the clinics. I learned so much and everyone was so nice!” The carvers love having the mountain to themselves, but also value the surrounding community. A happy returner commented, “Turner and Libby rolled out the red carpet again!”

The event went by smoothly, with only a few sled rides in the mix. The carvers had a blast, and were thankful to the groomers, lifties, chefs, patrollers, and locals who made this grand week possible. 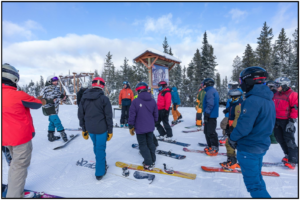 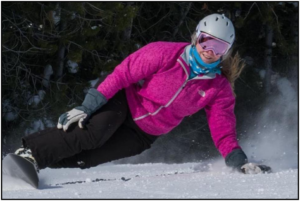 The Benefits of
Companion Animals

Working animals such as horses, guard dogs, and herding dogs have partnered with humans for centuries, but as time passed, companionship became more of a factor in the interaction between certain animals and their people. Nearly 70% of households in the United States now have some form of pet. We tend to be charmed by the ones that are cute and fuzzy, but really, how does having a companion animal benefit us? According to the National Institutes of Health, the benefits are many, although the science is still evolving. The most obvious examples are service dogs, who perform specific functions for their humans that they can’t do themselves, and therapy animals, which are trained to provide comfort and support in often stressful environments. But what about pets that aren’t trained for a specific function? Do they also benefit us?

Exercise: One study found that 60% of dog owners who walked their dog daily met the criteria for moderate physical activity. While we think mostly of dogs in this regard, riding a horse regularly can be a good core strengthening exercise. Blood pressure: In another study of adults over 50, dog ownership in particular was associate with lower blood pressure than that found in people who did not own pets. A separate twenty-year study of cat owners showed a decreased risk of death from stroke and heart attack compared to non-owners.

Pets can have an effect on mental health as well. They obviously act as a buffer against loneliness – whether you have a cat, dog, fish, hamster, or reptile. It’s always a nice feeling to have someone or something to come home to, especially if that person or animal is happy to see you as well.  Animals also help to relieve stress, whether that comes in the form of petting a dog or cat, or watching a fish swim in its tank. Pets can assist in providing a sense of security and routine for those with mental health problems and cognitive issues, while also providing a distraction from distressing thoughts or symptoms.

The U.S. Forest Service (USFS) has dropped its appeal of the lawsuit by the Yaak Valley Forest Council (YVFC) regarding a lack of a Comprehensive Management Plan for the Pacific Northwest Trail (PNT). In September 2021, the court ruled in favor of YVFC, giving USFS until December 31, 2023 to complete the CMP. USFS initially appealed the ruling, but has now dropped the appeal.

“We are pleased that the court sided with us in demanding the USFS do its job and create a comprehensive management plan,” said Amy Pearson, Executive Director of YVFC. “This is our only lawsuit in our 23-year existence, and it was simply to get the Forest Service to do what it was ordered by Congress to do back in 2009—to do its job. And we are equally pleased that USFS has dropped the appeal and is acknowledging their duty, by law, to create a CMP.”

The Pacific Northwest Trail—a route proposed from Glacier National Park to the Pacific Ocean—was first proposed to Congress in 1977. For the next 32 years, Congress rejected the proposal, largely because of the deleterious effects the high volume through-hiker trail would have on the Yaak‘s struggling and tiny grizzly population.