Left: Dean Herried. Above: Billboard that can be found in Berget’s old classroom where students got to sign their names. 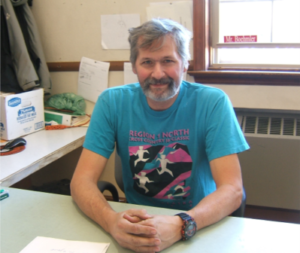 In Todd Berget’s old classroom at the central school, part of a wall is covered with the names of all the students who have graduated. “It was Todd’s idea”, said fellow teacher and friend Dean Herried. Underneath the names are Berget’s words “the students who stepped up, when others stepped aside.”

Herried remembers starting that wall of honor, back when the alternative school first moved to is present location from the basement of the  Juvenile detention building.

According to Herried, then school Superintendent, Donahue, who held the position before Kirby Maki, recognized that there were a lot of kids needing assistance.

“He hired Todd, Laura and me,” Herried recalled, “I was still over in the juvenile detention basement, when Todd and Laura moved into these rooms, it was all just storage rooms filled with stuff, we cleaned it all out and began.”

“Todd was a prankster who thought totally outside of the box, no idea was too big. God help you on April fool’s day!” said Herried.

They started painting murals in 2000, and most of which still grace the walls of this town.

“Some of the first ones I helped with were the flag on the back of he VFW, and the giant fish on the side of Empire foods,” recalled Berget’s former student Keegan Ball.

Soon after, Berget began to research sasquatches. “One of the first sasquatches we made was placed in the woods by Plummer school,” said Ball. “And we made one holding a bicycle for the STOKR bike ride.”

Now, the Yeti figures have become so popular that the Central school regularly accepts paid commissions from private citizens as well a local businesses to make them.

“We made one holding a coffee cup for Hava-Java, a bank robber for Glacier Bank, a weightlifter for Libby gym and one on top of the ice cream store,” added Ball.

Besides inspiring his students to make memorable public art, Berget also taught history, social studies and senior government classes, pushing the envelope to encourage students to learn real-life lessons. He would say, “you have a water bill to pay,” and the students had to figure out where to go, and who to talk to on their own.

Herried met Berget in college and has been a close colleague and friend ever since. Their plans for fun and inspiration never waned. “Recently, Todd found this amazing sasquatch costume that he would wear out at Kootenai Falls, just to mess with people,” said Herreid. “The plan for this Halloween was  for me to wear it and Todd would be ‘the Great White Hunter and he was going to chase me around all night.”

Berget is also known for over 90 magnificent metal eagle sculptures which grace Libby and many other places. He made the giant bells which hang from the old Haul Rd. bridge, and most recently served as a judge for the popular Kootenai chainsaw Carving competition.

Major hostilities of World War I, also known as the Great War, were formally ended at the eleventh hour of the eleventh day of the eleventh month of 1918, when the armistice with Germany went into effect. In his address to fellow countrymen on Nov. 11, 1919, then U.S. President, Woodrow Wilson, said “To us in America the reflections of Armistice Day will be filled with solemn pride in the heroism of those who died in the country’s service, and with gratitude for the victory, both because of the thing from which it has freed us and because of the opportunity it has given America to show her sympathy with peace and justice in the council of nations.”

In 1945, World War II veteran, Raymond Weeks, from Birmingham, Alabama, had the idea to expand Armistice Day to celebrate all veterans, not just those who died in World War I. Weeks was the leader of a delegation to General Dwight Eisenhower, commander of the forces involved in Operation Overlord, and also serving as Supreme Commander of the Allied Expeditionary Force in Europe, who supported the idea of a national Veterans Day. Weeks led the first national celebration in 1947 in Alabama which continued to be held annually until he died in 1985. Weeks has become known as the Father of Veterans Day.

In Eisenhower’s order of the day, delivered June 6, 1944, the five star general announced by radio broadcast (in part), “Soldiers, Sailors, and Airmen of the Allied Expeditionary Force! You are about to embark upon the Great Crusade, toward which we have striven these many months. The eyes of the world are upon you. The hopes and prayers of liberty-loving people everywhere march with you. Your task will not be an easy one. Your enemy is well trained, well equipped, and battle hardened. He will fight savagely… I have full confidence in your courage, devotion to duty, and skill in battle. We will accept nothing less than full victory. Good luck, and let us all beseech the blessings of Almighty God upon this great and noble undertaking.” 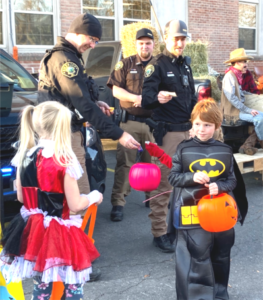 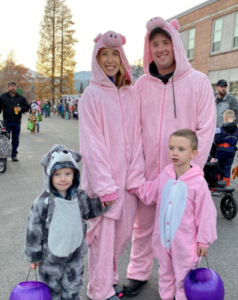 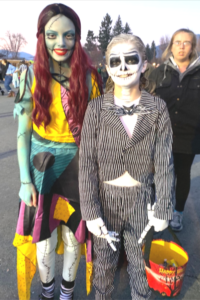 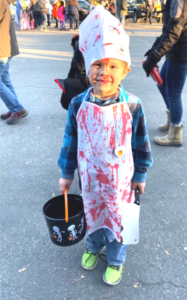 Blow up costumes were all the rage this year with giant babies, dinosaurs, unicorn riders, and even an alien carrying around an abducted person, but our favorites were families dressed in theme. The big bad wolf and three little pigs were spotted (second from left) and so were Sally and Jack from the Nightmare Before Christmas (third from left).

The Libby Central School’s trunk or treat event, which included a walk-through haunted bus put together by Harlow’s, along with 20 other trunks for trick or treating, was a spooky success with over 600 holiday fun-seekers in attendance.

Volunteers from the Rotary Club of Kootenai Valley served over 500 free hotdogs donated by Rosauers on buns donated by Empire Foods. Alternative school students and their teacher, Mr. Herreid, built and ran a haunted house in the school’s basement, and Interact club members managed games for trick or treating families to play. Interact is a Rotary service club for students ages 12 to 18.

Libby Public Schools and the Rotary Club of Kootenai Valley would like to thank the community of Libby for their support of the trunk or treat event and its ongoing success.