The Montana Department of Environmental Quality is seeking public input on a draft plan to build electric vehicle charging stations along “key travel corridors” in the state. Once finalized, the plan will detail how Montana intends to spend $43 million in federal funds earmarked for direct-current electric vehicle charging infrastructure that was included in the $1.2 trillion infrastructure package Congress passed last November.

The plan is intended to serve as a “backbone for future build-out of EV fast-charging stations” along interstates and key highways in Montana and support long-distance travel by Montana residents and visitors. It’s also intended to bolster economic development, tourism and workforce development, according to the draft document DEQ released June 27.

The department estimates there will be 30,000 electric vehicle drivers in the state by 2030, along with 100,000 EV drivers from other areas traveling Montana roadways annually.

As of January, there were 1,893 fully electric vehicles and 1,002 plug-in hybrid vehicles registered in Montana. EV registrations have more than doubled since DEQ began collecting registration data in 2019, but Montana still has one of the lowest EV ownership rates in the country, with electric vehicles accounting for 0.18% of all light-duty vehicle registrations. DEQ said the draft plan prioritizes areas where two travel corridors intersect as well “disadvantaged” and rural communities where private entities are less likely to invest in charging stations. National park gateway communities and “other recreation destinations” are also identified as priorities.

According to the draft plan, DEQ and the Montana Department of Transportation want to deploy fast-charging facilities no more than 50 miles apart that are located within one mile of established travel corridors and within walking distance of amenities in order to comply with requirements outlined in the National Electric Vehicle Infrastructure Program, which is part of President Joe Biden’s effort to curb greenhouse gas emissions.

DEQ also aims to design a system that’s capable of maintaining a “high operational reliability rate” — a nod to grid limitations expected to crop up in the form of overloaded substations or limited electricity supply during times of peak demand. The draft plan includes a list of 10 communities where such capacity issues are anticipated, six of which are located along US-2, the national highway that runs along northern Montana’s sparsely populated Hi-Line. Columbus, Superior, Darby and Dutton are also on that list.

The plan identifies the rough location of 131 existing charging stations in Montana along what the Federal Highway Administration calls alternative fuel corridors — routes that have been prioritized by the federal government for EV charging stations. Those routes include interstates 90, 15 and 94, and U.S. highways 93 and 2. About one-third of those existing stations were at least partially funded with money from Montana’s share of a 2017 settlement with the Environmental Protection Agency stemming from Volkswagen’s illegal circumvention of emissions monitoring technology. DEQ is accepting comments on the draft plan through July 18, ahead of an Aug. 1 deadline to forward the plan to the Federal Highway Administration. The department will host a virtual listening session with MDT on Monday, July 11.

DEQ collaborated with MDT on the draft plan, which was developed with input from tourism and economic development agencies, electricity utilities, EV charging station companies, small businesses, non-governmental organizations and business associations. DEQ included virtual and in-person meetings and public surveys in the effort, and invited members of the Legislature’s Transportation Interim Committee to comment on plan development. The agency received 388 responses to its survey.

The $43 million allocation will be distributed through the National Electric Vehicle Infrastructure Formula Program, which was established by the Bipartisan Infrastructure Law. It’s a five-year allocation, with the federal government slated to release between $6 million and $8 million annually, according to DEQ energy resource professional Kyla Maki.

Maki said DEQ will submit requests for proposals to begin building the charging stations after the Federal Highway Administration has approved the state’s plan, and will start scoring those proposals this coming winter or spring.

Be Cautious of Cattle on Forest Service Roads 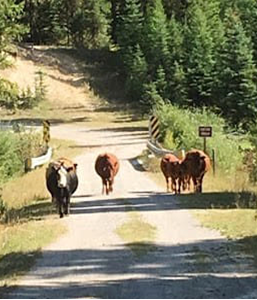 Reminder: Please drive with caution on forest service roads. Permitted cattle are now grazing NFS Allotments on the Kootenai until the end of September, these cattle use and graze roadways on the forest.

Be mindful of Montana’s “Open range” Law concerning hitting livestock on roadways in the state of Montana. Montana Open range includes secondary roads and highways. Hitting livestock with a vehicle makes the driver liable to compensate the animal’s owner, and damages to your vehicle are your responsibility. Be safe out there as you enjoy the Forest.

Libby native Ryggs Johnston is playing in the 35th edition of the European Amateur Championship this week at Parador de El Saler, Spain.

Johnston, who honed his skills at Cabinet View Golf Course, is one of 144 competitors representing 42 countries, who teed it up on Wednesday for four rounds of stroke play competition. Wednesday, Johnston carded an even par 72 and is tied for 36th with nine other players. Italy’s Filippo Celli’s 8-under 64 leads the rest of the field by three strokes.

The University of Arizona’s Christian Banke, the only other player from the U.S. in the tournament, is tied for 106th after shooting a 6-over par 78.

Johnston was scheduled to tee off at 11:29 a.m. Thursday.

The championship, first played in 1986, is consistently ranked amongst the strongest amateur events in the world for strength of field and regularly attracts the top talent in the amateur game.

Several Ryder Cup stars and major champions have featured in the European Amateur Championship in the past. Rory McIlroy (2006) and Sergio Garcia (1995) both won the event before turning pro, while Lee Westwood (1993), Paul Casey (1999), Danny Willet (2007) and Tommy Fleetwood (2010) have all previously medaled in the tournament.

A win in the European Amateur Championship would net Johnston an invitation to the 150th British Open in St. Andrews in three weeks. Top 5 finishers are invited to compete in The Open final qualifying stage.

Johnston, who plays collegiately at Arizona State, is currently ranked No. 83 in the World Amateur Golf Ranking. His highest ranking was No. 40.

Johnston may not have had the junior season he wanted to on the links, but it didn’t affect his performance in the classroom. The Sports Business major has a 4.0 cumulative grade point average. Johnston was tied for 53rd in the PAC-12 Championships in April.

In Johnston’s first full season in 2020-21, he earned third-team All-America honors in his sophomore year. At the 2021 NCAA Championship, he shot a 7-under 63 on May 29, the second-best round by a Sun Devil in NCAA Championship history.

According to the European Golf Association, Parador de El Saler will present a challenge to the players this year. The par-72, located in the El Saler nature reserve near Valencia in Spain, is regularly ranked among the top courses in Europe. Built in 1968 by the internationally recognized “architect of Spanish golf,” Javier Arana, the course is set up at 6,890 yards in length this week. With lower than normal winds forecast for the tournament days, it could take a score deep into red numbers to claim the title.

Draws and live scoring can be followed throughout the week on the European Amateur Championship event page, while updates and highlight videos can be found on social channels @ega_golf.