The Yaak community came together after church services on Sunday, July 4, to celebrate
the holiday in a meaningful way while focusing
on history and culture.

As settlers to this new world came in, their
desires for freedom of religion, a focus on family,
and to create a country framed within the mindset
of Faith were strong. Faith first, family second, and the freedom of rights to build a new country were amongst the reflective conversations as Yaak
residents started assembling between the
community church and the town center — the
Yaak Mercantile—to start the journey of a
meaningful 4th of July gathering.

An afternoon parade then started up the
mountain. Upper Yaak Fire Department led the way with one of their engines driven by Paul Dalziel. Kids and adults followed him on their bicycles, pumping hard up the three-mile route to the Yaak Community Center. One of the youngest residents in the Yaak, 5-year-old Evelyn Johnson, rode her bike with her family the full three miles. She was not giving in to the flatbed trailer ready for anyone who wished to put their bikes on in reprieve.
ATV’s, cars, motorcycles, even an Army truck and trailer filled with Yaak residents made up just part of the community procession.

This is not the first time Yaak residents had come together for a parade and the number of folks who showed up with kids and lawn chairs set on the edge of the route to enjoy the parade grew
tremendously this year. As the parade passed by, lawn chairs and kids were then scooped up and parade-goers then brought up the tail-end of the procession.

By the time young Evelyn Johnson had peddled
the three miles to the community center, the
feeling of a ‘parade’ had subsided and a new ‘vibe’ came into play among the crowd as they gathered.  It was unmistakable and very strong.  The crowd was ‘together and one’ pulling into the community hall parking lot and overflowing in all directions.

All modes of transportation were parked aside, and everyone walked to the front and center of the community hall, many of them carrying walking sticks.

Teresa Purdy, chair for the parade, gave a
simple smile and handoff to Sandy Beder-Miller
as the community prepared to read the Declaration of Independence.  Sandy opened with wonderful remarks and notes of gratitude to all in attendance.
Pastor Clayton Rockwell then lead the community
in a rich and soulful prayer.  The Declaration of
Independence was read with deep emotion and heart by retired judge Dave Gambill, Yaak resident Larry Miller, retired forester Zippy Purdy, a young lady of the Yaak, Lincoln County State Senator Mike Cuffe, and retired 26-year U.S. Air Force and Gulf War Veteran Mike Harrell.

As each read their section of the Declaration
of Independence, the community read along in unison with the free booklets provided. With walking sticks in hand, they were told of earlier times in culture where a similar stick would be taken to public meetings and thumped on the ground when
speakers said something to which they agreed whole-heartedly. Attendees would thump their stick and shout aloud, “Huzzah!”

As this year’s reading of the Declaration of
Independence commenced, the crowd responded strongly with affirmation that the document still holds rich significance in today’s modern times.  Much as I suspect took place in Thomas Jefferson’s time, those present were thumping their walking sticks and shouting “Huzzah!! Huzzah!!”

In all, over 80 people came together for this year’s reading at the community center. Following the reading and over hotdogs and ice cream cake, it was heard, “This was a totally worthwhile event and I can’t wait to come next year.”

“Yes.  We are anticipating it is going to be a record-breaking gathering this year for athletes registered in both the novice and professional group,” shared Dee Teske, one of the event coordinators for the 2021
Kootenai Highland Gathering.

This week will mark the 9th year in which the SAAA (Scottish American Athletic Association) Gathering and Games will commence on the grounds of the River Bend Restaurant located at 13068 Hwy 37 in Libby.

Events kick-off this Friday, July 16, beginning at
6 p.m. with a meet-n-greet of clans and athletes to be followed by the Gathering’s traditional Primitive Games. All are welcome to compete in the evening’s Tug-of-War, Sexy Legs Contest, Bow and Arrow, Spear Throw, Stone Throw, Ax Throw and Cake Toss. New to the primitive games this year will also be the Bigfoot and Littlefoot Boogie contest. Registration to compete is $5 and open to anyone age 10 and 99.

While there will not be live music this year and the traditional highland dancers are still unable to travel from Canada, there will be live pipers ready to lift the spirit of the games on day two of the gathering.

The sanctioned SAAA games will begin on Saturday, July 17 at 9 a.m. with registration at approximately
8 a.m. Given the record number of athletes registered this year, it is safe to say there will consistently be events transpiring through each  hour of the day until approximately 5 p.m.

With exception, of course, to the traditional break taken each year at high noon. The Grand March and presentation of Clans
escorted by the sound of
bagpipes is always a highlight of the gathering.

“We also have nearly
double the vendors we’ve ever had on-site for this year’s gathering,” Teske
added. All are encouraged to bring plenty of cash as there is no wi-fi service at the River Bend and therefore no way for vendors to process credit card transactions.

Bring a lawn chair and an umbrella for some shade. There will be two large misting tents on site to take a walk and cool down if necessary.

For the kids, a $5 pass on Saturday will bring unlimited use of the bouncy house, water slide, and train rides for the entire day.

Admission is by donation. Parking is in the field entrance just past the River Bend Restaurant.

“We hope that everyone will take a little time to come out and enjoy the games this year, learn a little something new that they maybe did not know about the athletic games, and just have an overall great time,” Teske said in closing conversation this past weekend.

“And we also want to thank from the bottom of our hearts all of the wonderful sponsors who have supported us in the past and stepped up again this year to bring the SAAA judges and Official Highland Events to our community!” 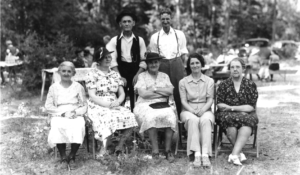