Flathead Electric Co-op advises that scammers are contacting members and threatening to disconnect their power if they do not upgrade their meters for $500. The scammers urge members to buy gift cards and then ask for the redemption information on the card’s back. The scammers claim they are Flathead Electric employees and/or Trustees.

Other scammers ask members to provide financial or personal information over the phone to prevent disconnect. Scammers are attempting these schemes via both text messages and phone calls. Some scammers can program their phone numbers to appear as if they were calling from the Co-op.

It is not the policy of Flathead Electric Cooperative to threaten members with immediate disconnect if there is a balance on their account. The Co-op follows a comprehensive series of procedures with regards to delinquent accounts to find an equitable solution for all concerned.

Should you receive a call like those reported, do not release your personal or financial information, or pay using gift cards. Hang up the phone! Notify the Co-op at 406-751-4438. You can also report unwanted calls or scams to the Federal Trade Commission: www.reportfraud.ftc.gov

On Friday, February 4, 80 students from Troy elementary school made their way to the park just outside the Troy Museum. The event was put on by Friends of Scotchman Peaks Wilderness (FSPW) and aided by Idaho Panhandle Avalanche Center (IPAC), Troy community members, and the Yaak Valley Forest Council (YVFC).

The event involved six different booths meant to educate on a range of topics associated with safety within and the exploration of the outdoors. At the station on forest ecology hosted by Chris Reichart, kids learned about how to measure trees as a forester, and the basics of forest management practices from a silvicultural perspective.

Pete Leusch taught wilderness and ecology by having the kids make a web with rope as they followed the theoretical path of energy from the sun, to plants, to mammals, to birds, and back to the soil.

Tree identification was led by Maggie Anderson, who went over the basics of tree diversity and how to tell them apart by looking at the number of needles, their shape, and bark type.

Students got to explore the mammal trunk with Ashley South and Anthony South, looking at the skulls, antlers and the furs of a river otter, an ermine, a coyote, and other Montana mammals.

Participants got to test out some empty bear spray cans and practice how to deal with a bear in the woods with Ben Palmer and Katie McCahan.

Last but not least, Jon Totten from the IPAC reviewed avalanche awareness by hiding beacons under the snow for students to track down.

Yes, Mardi Gras is coming to Libby in the form of a ball on February 26 at the Memorial Center. If you enjoy the Holiday Gala or are just longing to have an exciting night out with your friends and neighbors, this could be for you. The formal event, modeled on the traditional Mardi Gras balls held in Louisiana and Alabama, is being organized by three local residents – Alexis Marozzo of Granite Peak Gardens, Cora Gilmore of The Shed restaurant, and Charlotte Thigpen-Carlson of Carlson’s Cove Guesthouse. Charlotte grew up in Mobile, Alabama and is well-acquainted with such celebrations.  Alexis is providing the decorations and Cora the food. The three ladies wanted to provide an opportunity for the community to dress up and enjoy some music, as well as each other’s company, and to support the local economy. Events like this potentially bring in money for hotels, restaurants, facility rental, printing and award production, and formal rentals. In addition, the ball is partnering with the Lincoln County Women’s Shelter to donation a portion of the ticket sales to this worthy cause.

All Mardi Gras balls are organized by a specific krewe or society, which are common social organizations in areas where Mardi Gras is a tradition and this ball is being sponsored by the newly formed LOOM Society. Tickets, available by calling Alexis at Granite Peak Gardens at (206) 235-6325, are $100 per person. This covers set-up, food, the dance contest, and live music provided by the Late Bloomers. Food will be New Orleans style heavy hors d’oeuvres and include King cake, beignets, jambalaya, and muffuletta. There will be a cash bar and attendees must be twenty-one or older to attend. Formal attire is required. Since the theme is the Roaring Twenties, costumes such as flapper dresses for women or zoot suits for men are encouraged but formal attire, including full length formal dresses for women with suit and tie or tux for men, are also acceptable. Those without a ticket or an ID confirming they are over twenty-one, or not wearing appropriate attire, will not be admitted.

The event will include an East Coast Swing dance contest with trophies, as well as the coronation of a traditional King and Queen of the ball. The royalty, as per custom, will be chosen based on who finds the baby figurine in their piece of King cake. The lucky couple will be crowned by the very first Logger Days Queen, Linda Schikora, and get to take home a crown. Customary Mardi Gras paraphernalia, such as beads and other items, will be provided at the door.

The history of Mardi Gras is intimately tied to the period of Lent practiced in liturgical churches, in particular Roman Catholicism as well as Lutheranism. However, as with many other holidays, it incorporates aspects of pagan festivals like the Roman Saturnalia and Lupercalia. In French, Mardi Gras means Fat Tuesday, which is often the name given to the day before Ash Wednesday, the start of the forty day period of penance and fasting that precedes Easter Sunday and is meant to mirror the forty day period of Jesus’s trials in the wilderness. In a sense, early binging during this time was practical and involved finishing off the perishable fatty foods – meat, cheese, milk, eggs – that remained in the home and might spoil during the period of Lent. From Rome, these festivities spread first to most of Europe and then on to the New World.

Some say the first Mardi Gras on American soil occurred in 1699 when French explorers happened to land near modern-day New Orleans on Fat Tuesday. Others feel that the honor of the first Mardi Gras belongs to the 1703 celebration in Mobile, Alabama, as Mobile was founded in 1702 and the city of New Orleans not until 1718. Either way, these and other French settlements celebrated with street parties, masked balls, and lavish dinners.  In 1857, a group of local Louisiana businessmen started the Mistick Krewe of Comus to organize events and other krewes, or societies, soon followed. Louisiana remains the only state in which Mardi Gras is a legal holiday.

Pre-Lenten festivities are known by various names in other countries, the best known probably being Carnival in Brazil, which incorporates European, African, and native traditions. Venice’s Carnevale dates back to the thirteenth century and is famous for it’s masked balls. Shakespeare used this as the setting for his play The Merchant of Venice. In Germany, Karneval, sometimes called Fastnacht, includes parades, balls, and an odd tradition where women cut off men’s neckties. During Denmark’s Fastevlan, children dress up and gather sweets, similar to our Halloween.

The Mardi Gras Ball in Libby is scheduled at the Memorial Center from 7-11pm on February 26 with doors opening at 6:45pm. More information is available online at www.gab.com/groups/59296. If you need to brush up on your East Coast Swing technique, The Shed is hosting swing dance lessons every Tuesday in February from 6-9pm. The cost is $15 per person for a fifty-minute group lesson. Call (406) 293-3264 to reserve your spot. 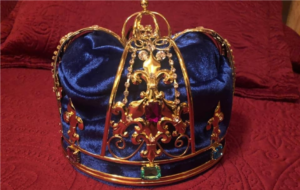 The king and queen crowns for the Mardi Gras Ball. Photos courtesy of LOOM.