Pictured Above: “The big day finally arrives.  May 3, 1892 a construction train arrives from the west initiating the arrival of modern transportation and
communication in Libby. On hand to commemorate the event was C.E. LeMunyon, the Great Northern Railroad’s official photographer. The photo was taken at the south end of Mineral Avenue, just west of the depot. In the background is the
building housing the Libby Townsite Company, developers of the new town.”
Copy by Jeff Gruber, Photo courtesy of Montana Historical Society

The Northwest Montana Posse of Westerners (a history organization) is pleased to announce that Libby native, Jeff Gruber, will be presenting at the April gathering to be held next Monday, April 19, in Kalispell. Gruber’s upcoming
presentation is entitled, “Hard to get to, harder to leave: A look at Libby’s Early
Development 1808-1900.”

Located in Montana’s most rugged and isolated corner, Libby was settled by
an adventuresome and opportunistic breed of pioneer. From its beginnings, Libby was an attraction for those who wished to find opportunity in the remote mountains and steep river valleys of northwest Montana.

First visited by David Thompson in the early 1800’s, Montana’s Kootenai Valley would not draw permanent residents until Jim Hill’s Great Northern Railroad came through in 1892. This program will describe Libby’s early settlement and development, touching on the roles which Native Americans, explorers,
missionaries, and later fur trappers and miners played at the time.

Libby’s early mines, though billed as being rich, never lived up to the golden expectation their stockpiling promoters promised. As such, Libby’s early development was noted by the rises and declines of the mining industry.

Posse member Jeff Gruber is a well-known historian, a retired educator, and author of the soon to be released Our Hometown: A Pictorial History of Libby,
Montana.

“Born in Libby in 1966, Jeff Gruber has spent a lifetime among people and
places that have made Libby such a fascinating town. Living, working, and playing in the most unique of Montana places has imbedded in Jeff a deep love for his hometown and its residents,” the inside dust cover of his upcoming book reads. “Graduating from Libby Senior High School in 1984, Jeff earned his Bachelor of Science degree from Western Montana College in Dillon in 1989….

This time last spring, Yaak WINGS fundraising events had found themselves severely limited due to the Covid-19 outbreak and restrictions being implemented at that time.  With safety for community in mind, the Yaak’s biggest one-day annual event was cancelled.
While highly disappointing for all volunteers and organizers at the time, the pandemic certainly hampered all fundraising efforts in 2020, but did not stop the work of Wings Regional Cancer Support which has continued forward in assisting cancer patients and their families across northwest Montana.
This year, Yaak organizers are thrilled to reinstate all annual funding opportunities lost and to fully replenish outgoing monies for the program.  The Yaak Wings Auction is now officially set for May!  “Pandemics don’t end cancer, and we’ve come up with a new ‘Flight Path’ for fundraising safely here in The Yaak,” shared Sara Harrell, one many new board members who have joined the planning process to organize and facilitate this year’s auction event.
Gwen Allen and Larry Miller, 2021 Yaak Auction Co-Chairs, are excited to share that this year’s board is eleven members strong, nearly doubling the manpower of events past.
Northwest Montana has seen a lot of changes this past year.  Many neighbors have passed away, several new neighbors have moved to the area and Wings Organizers want to be sure to share just exactly how their efforts work towards supporting all Lincoln County residents each year.
Continued on Page 7

Inside the Libby Wastewater Treatment Plant 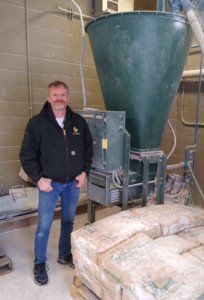 Ever wonder what happens to the water that goes down the drain? Ever give a thought to the numerous solvents, chemicals, oils, and organic waste that we flush away so many times every day?

You may be aware that it eventually ends up in the mighty Kootenai river. And, if you are prone to think about such things, you are likely also aware that our waste products do not pollute our river, nor the Columbia River or Pacific Ocean, where the Kootenai’s flow eventually travels.

How this happens is the work of a few men,  highly specialized equipment, and billions and billions of microbes.

Before meeting with Swenson, I had the pleasure of spending time with Timothy Pomeroy, who was holding down the front office while Chris and the rest of the sewage plant crew were busy checking on the many processes at work within the complicated and busy treatment facility.

is funded by the U.S. Federal Department of Labor.

Pomeroy shared that learning about the different parts and processes within the plant will
help him get a job in the future and while learning he is also busy building a 3-D model of the plant which will be used for future educational programs.

Pomeroy’s enthusiastic presence in the front office also helps to enable the small crew to constantly check on the many functions which the plant
performs beginning with the Wet Well Pump House.

Known to the guys as “The Pit,” this is where the raw wastewater first enters the facility. It is filled with grease balls made up of fats and oils which are washed down the drains of restaurant and home kitchens all over Libby daily.

“These globs of grease are a problem for all wastewater treatment plants” shared Swenson. “We use a net to fish them out before the water is pumped to its next stop, the Headworks building”.

Before entering the Headworks building, Swenson warned me it was “the most unpleasant” room in the facility. And though it truly was a bit stinky, it was fascinating to observe how the water is pumped through a moving rake-like structure. “This removes all

The Headwaters building also houses the blower room, where big, green, very noisy blowers feed oxygen into the
water. This process is necessary to enable the microbial bacteria to do its work. The air being forced into the water at this stage creates

oxygenated sludge which gets shipped on to the next stage of process within the plant which is called the Oxidation ditch.

“This is where most of the work gets done, where the bacteria actually digest most of the waste,” said Swenson. The oxidation ditch is a large open pool filled with gas bubbles formed by the filamentous bacteria which are actively digesting the organic waste matter in the water…