By Karen Morrissette, The Montanian 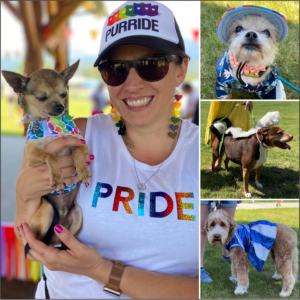 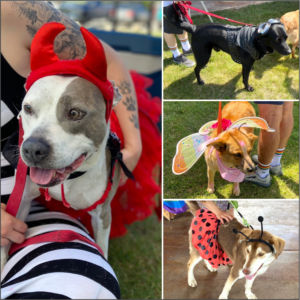 Some of Lincoln County’s pets were dressed in their finest costumes on Saturday, July 9 for the area’s very first doggie fashion show sponsored by 4 Pawz Pet Retreat and the Lincoln County Pride Festival. 4 Pawz co-owner Amanda Plummer said that after the idea was broached, they jumped at the opportunity to participate. Ten dogs strutted their stuff, including two that are currently available for adoption from Kootenai Pets for Life. The event was a great opportunity to get those dogs seen by the community and hopefully into a loving home. Some of the dogs were 4 Pawz clients but the rest were from the community at large.

A few of the participants provided their own attire, but Cody Taylor helped in providing many of the elaborate costumes, while guest narrator, Nova Kaine, read a short biography of each canine model as they walked the runway.  As expected when working with animals, not everything went as planned. A couple dogs refused to go up the stairs to the stage, requiring parental assistance. One lost most of her costume on the way down the stairs on the other side. Yet another tried to trip her mom while onstage in a fit of mischievousness. All in all though, everyone was remarkably well behaved. The winners were chosen based on decibel level of applause and cheering from the full-house crowd during the walk. Third prize went to Mango, the adorable Chihuahua, while the two shelter dogs, Brutus the Aussiedoodle and former sled dog Chena, a greyhound mixed with Husky, tied for second. The first place winner was Dilly, a Chihuahua/Terrier mix showing off her vacation vibes.

Plummer and general manager, Todd Sines, spearheaded the event and were able to make sure it came off flawlessly, if not without a few laughs. They also manned a booth, providing a doggie pool and bowls of water to keep thirsty pups comfortable in the heat, as well as cookies for both dogs and humans made by staff member Shelley Hall. Maddie Brobst of Petey’s Pampered Pups, part of the 4 Pawz family, provided a spaw day gift card as one of the prizes. Thanks to everyone who attended, helped, and made this event a fun and funny part of Saturday morning. 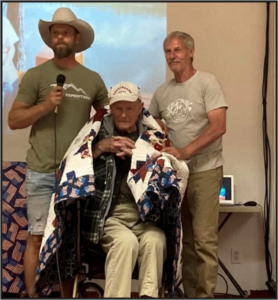 On July 9, surrounded by friends and family, Virgil Byron Rockstad celebrated his 100th birthday in the community room at the VFW.

Virgil is a Veteran of the US Coast Guard and served at Pearl Harbor during WWII.  His ship was LST71 a landing ship, transporting Marine tanks and Marines to the battle front. Virgil was the Captain of the only 3” gun on the ship and was classified as a ship fitter.

Members of the Kootenai Valley Quilt Guild had the honor of presenting Mr. Rockstad with a Quilt of Valor, to thank him for his service to our country.

The Quilt top was sewn by Mary Lou Goodpaster, quilted by Velda Williams and presented by Marge Kroeger and Linda Crum.

The Quilts of Valor Foundation began in 2003 with a dream of providing comfort and healing to service members and veterans through quilts. Since 2003, over 300,000 quilts have been awarded. The Kootenai Valley Quilt Guild has partnered with the Libby VFW to provide quilts to local veterans. We are proud to be a part of recognizing the commitment and sacrifice of our veterans. The Guild has been a part of our community for over 30 years. Our members include women from all backgrounds and a variety of quilting interests. We have awarded over 25 quilts to local veterans and will award over 40 more in a ceremony on Veterans’ Day, November 11, 2022.

After a 3-1 run through their Big Bucks Tournament, The Libby Loggers were looking to keep the momentum rolling.

Why did it have to be against the 20-6 Glacier Twins.

Stately Lee Gehrig Field served as the host. As the Glacier Twins came to town to battle the Loggers in last Tuesdays (6-28) double header

In game one. The Loggers would remain competitive until a big fifth inning propelled The Twins to an 8-3 win.

Game two. Lets see. There’s a reason the twins lead the Western District. There good. They hit from top to bottom in the order, and go deeper on the mound than most teams.

If there was a lesson to be learned, fine. For now, that game disappears. Poof.

Trailing 3-0 entering their half of the third inning. The Loggers would get on the scoreboard Tripp Zhangs two out single. would send Aiden Rose home, and it was 3-1 after three innings.

The Loggers weren’t done yet. With the historic Libby Hotel beckoning in the foreground. Zhang would go yard for another Logger run. A Cy Williams sacrifice! another run! With the score 8-3 after six innings. Neither team score In the seventh. Final score Glacier 8 Libby 3.

Tripp had both Logger hits and would finish the game 2-3 with a HR, an RBI, and a run scored.

Three Logger pitchers would give up 8 hits while striking out 4 batters, and issuing three walks.

Glacier’s would allow only three hits, while striking out four batters and walking two.

Oops! I just have to do this. In game two, Chase Rayome bases loaded single would bring in a run. Poof!

By Jim Dasios, The Montanian