These field trips are designed to provide students with the opportunity to experience what community colleges and universities have to offer. Through these field trips, LMHS students are able to see, in many regards, what life is like for college students. The hope is that by providing these field trips throughout a student’s time in middle and high school, we can keep the conversation about college going and help students realize some of the options that exist for them after they graduate.

Towards the beginning of October, the 8th grade class visited the University of Montana in Missoula. For their first activity, they split into their groups and toured campus with UM faculty members. As they explored, they learned about different areas of study offered, as well as many of the opportunities Griz students have to be active and involved outside of class. Students were able to eat lunch in the Food Zoo—UM’s popular, buffet style dining area. After lunch, they attended two informational panels organized by UM. The first involved several faculty members who offered information on and answered questions about campus housing, career services, tutoring, the UM Police Department, diversity, disability services, financial aid and enrollment services, and more. They were followed up by a panel of current UM students who spoke about each of their own experiences at UM. They told students about their schedules, majors, on and off campus housing experiences, the activities and projects they’ve been involved in, why they chose UM, and how they handle stress, studying, and being away from home. At the end of the field trip, students either went on a hike to the “M” or stayed on campus to do a scavenger hunt in The Oval.

Later in October, the 7th grade class went to North Idaho College, a community college located in Coeur d’Alene. Rather than have a formal tour of NIC, students broke into their groups and explored campus by map and scavenger hunt. Each group selected a student leader to navigate campus under the supervision of their chaperones. 7th graders also sat in on a presentation by NIC faculty. The presentation explained the various levels of degrees one can obtain through post-secondary education, examples of careers that typically require specific degrees, things students may want to think about about when choosing a college or university that meets their needs, the types of degrees offered at NIC, what student life looks like at NIC, and the services NIC provides for their students. After eating lunch on campus among NIC students, 7th graders visited NIC’s Parker Technical Education Center. They went on a tour of this campus and learned about the technical programs offered. They were able to see first-hand where students work, the equipment they work with, and even students actually working on their various projects. 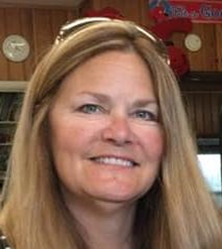 Judy Graham, long-time, loving educator for Libby Public Schools died the morning of November 23, 2019 from complications of a heart attack. Judy’s philosophy regarding children was clear.  Kids should have time to move and play, be loving and kind, make mistakes to learn from them, but most of all, BE KIDS!!

Because Judy left a lasting impression on the Libby community, her fellow educators, and especially children, the idea of erecting a playground in her honor was shared with the Graham family.  This memorial playground will help carry on her legacy of joy and movement she so believed all children need.  The Graham family was thrilled with the idea.  Besides honoring Judy for her dedication and service to our community and the school district, this playground will allow community members, and most importantly our children, find pleasure because of Judy – keeping her memory alive for generations.

A group of Judy’s colleagues held an initial meeting to get the ball rolling.  “It is so amazing how this idea has taken off.  Judy was so loved and respected and will truly be missed.  Her love of children and seeing them be joyful was her first priority.  Once the idea was shared and the family agreed, so many wonderful people have come up with amazing ideas to support this project,” stated many, heavy-hearted coworkers and friends.

The playground will be constructed at the Libby Elementary School site.

Donations may be dropped off at the following locations:

Fundraising projects are already underway. Every Sunday until Christmas, Helen Wickham will be manning a wrapping station in the living room of Cabinet Mountain Brewery from noon to 4 p.m. (later if needed).  The gift wrapping will be provided by donation.  Items can be dropped off or you can stick around, enjoy a brewery purchase, and receive $1 off your food/drink order.

There are many other fundraising ideas being considered.  If you have an idea that you would like to suggest, please contact Doreen Gruber(406) 293-1431.

“Here’s the problem: Why kids won’t listen. Children’s ability to move and play are being restricted more than ever. We are trying to protect them by saying, ‘No climbing,’ ‘No running,’ No spinning.’ By constantly hovering over kids, restricting their movement, and diminishing their time to play, we are causing more harm than good.”

A quote from an article sent by Judy just weeks before her death.-

“This is a big endeavor that will take many hands to make it come to fruition.  Thank you in advance for everything you will do to make this happen.  Teamwork makes the dream work.”

Mutual aide the key to success

On Saturday, Dec. 7 at around 6:45 p.m., as most of the Upper Yaak Fire Department sat down to eat dinner, a page went out first to Upper Yaak Fire (UYF) and then immediately to McCormick Fire for a structure fire at the 14 mile of Yaak River Rd.

“The reason for calling both fire companies was due to the fire being located in what is referred to as No Man’s Land on Yaak River Rd.”  Said’ Mike Sanders “A twenty mile long area that has no Fire Department protecting it.”
Fire fighters at both companies responded immediately from as far as away as 35 miles in the Yaak. Donning their PPE they started the drive, both the Yaak and McCormick had engines leaving their stations within nine minutes of the page-out.

“A pretty good time for rural fire stations that have fire fighters that have to drive to the station, put on all of their PPE, open the doors, start their engines just to get rolling.” Sanders, told the Montanian.
Just ten minutes after the page a UYF crew member was on the scene, his initial inspection of the fire found a log cabin fully engulfed from one end to the other and flames perhaps 40 feet high. Radioing his report gave all the incoming resources the information and dangers they needed to prepare for. One of which was a propane tank on the east side of the cabin, which was secured within five minutes protecting all incoming fire fighters.

The Yaak Fire Chief had nothing but praise for the response of everyone involved and especially how well Troy dispatch did in organizing incoming resources.

“Very professional and usually a step ahead of whatever it was we needed. They had law enforcement, NLI, Northern Propane and Troy Ambulance contacted and in route before we even asked and their suggestion of Mutual Aide from Troy Rural was the key to success.” said Sanders.

According to UYF Chief Troy Rural when asked, immediately sent one tender and their Pump Truck. The latter of which the chief said was “Invaluable in supplying water in such a rural setting. I have seen it in action and that piece of equipment is amazing!”

Troy Rural Fire was deployed down the highway four miles at the 17 mile bridge and within minutes of arriving an empty tender was ready to head back to the fire.

“Without it the refill times can be up to half an hour if everything goes right…and it usually doesn’t.” Sanders added.
Around midnight resources started being released as all the danger was past. At around 4:30a.m., after a grueling nine hours and approximately 14,000 gallons of water, after returning to the station, the Yaak Fire Department fire fighter volunteers, got in their cars and headed to their homes to finish their cold dinners.

“Tired? Yes. Upset that they had to work that long with no pay? Nope.” Said Sanders.

They, like all the others involved that cold Saturday night, freely and happily give back to a community they love.

“And besides, they like putting out fires.” Sanders added.

The Fire Chief, Sanders  said, “We are always searching for more men and women and even teach the older teenagers, so if anyone is interested in a no pay but exciting lifestyle contact the Yaak or McCormick or Troy fire and join in the fun, because you are wanted and needed.”

Libby Ambulance responded to the scene and took the owners of the cabin to Cabinet Peaks Medical Center due to smoke inhalation. 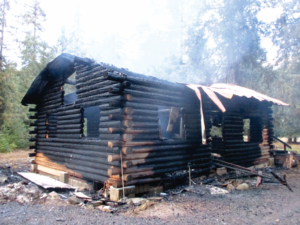