Middle-school girls basketball took to the court on Thursday, January 21, at the Libby Elementary School gymnasium.  The 7th and 8th grade athletes from both Libby and Troy demonstrated they were ready to bring the skills learned in practice over recent weeks to the competitive floor.   Photo by Stacy Bender, The Montanian

“We are making sure that the young ladies feel safe and acknowledged while trying to create a time for them to enjoy each other outside the classroom in a competitive realm,” shared Lady Knights basketball coach, Kyla Grose, in a recent email. “We hope to see the girls this season grow as an athlete but also grow in self-confidence, perseverance, and pride in accomplishments on and off the court.”
“ We are really excited about this group and feeling blessed to be playing during this time,” wrote Micah Germany, middle school coach for the young Lady Loggers. Both coaches have been working with 6th through 8th grade athletes from Troy and Libby in recent weeks while simultaneously keeping a flexible mindset at the helm as anything can happen during a pandemic.

Ensuring the extracurricular opportunity for the 54 athletes on both Libby and Troy’s young basketball rosters has been of paramount  priority for those who understand the importance of health and fitness not only amidst the pandemic at play, but in relative nature to each student’s growth.
Sustained and improved health practices. Social interaction in an actively challenging environment which develops problem-solving skills. Academic expectations which foster individual accountability toward achieving goals. Each of these combine both on and off the court to lay the groundwork for that growth.

“While coaching in the middle of a pandemic has proven a challenge, we have found our way around it and managed to find success,” added Coach Grose.  The Lady Trojans were definitely the underdogs on the court this past week.
Having only one 8th grade athlete, the Lady Knights would put their 6th grade roster up against the Loggers 7th, and their 7th grade up against the Loggers 8th.

Yet every athlete on the court had done their pre-game work to simulate various scenarios, build effective communications, and fine-tune fundamentals for the competitive opportunities they would find.

Not one moment was lost on anything less than striving towards each team’s individual potential and success as the Lincoln County rivals challenged one another to the basket.

“I have spoken with Coach DeShazer at the high school about what she would like to see from her upcoming freshman class,” shared Germany of the work the Lady Loggers are doing to reach their next level. “We are trying not just to get there, but hopefully beyond.”

“Whether it is 8th grade next year or high school play for others, we are just trying to help as many girls get prepared for their goals as possible. They are an athletic group with some strong skills, so their season has been exciting,” he added.

“Our school district was great at working together to make this season happen,” Grose closed, “and we have been having a ball giving these girls the opportunity to have fun and get the job done!” 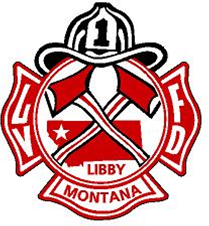 Each year, the Libby Volunteer Fire Department uses key performance indicators to measure and track the success of the department. This analysis acts as a guideline vital to establishing strategies to improve response protocols and achieve intended goals and objectives.

The annual activity report for 2020 reflects the efforts of the department’s dedicated firefighters in providing incident response and emergency services, public education and awareness, and fire prevention and community outreach.

The Libby Volunteer Fire Department responded to 123 calls for service this past year with an average of 18 members responding to each emergency call.

The average turnout time (the time from when the station and personnel were dispatched to the time when the units were en route) was 5 minutes and 51 seconds.

The reported average response time from the initial call until the arrival of all apparatus to the scene was an impressive 10 minutes and 16 seconds with an average of 29 minutes and 45 seconds spent on the scene from arrival to clearance.

The Libby Volunteer Fire Department spent a total of 637 hours on incidents in the City of Libby and its surrounding communities. This figure represents the accumulated total of time spent from the first recordable awareness of an emergency until the time the response apparatus cleared the scene.

A half-dozen people were in attendance of the Troy City Council meeting this past Wednesday, January 20.  Mayor – Dallas Carr, City Clerk – Tracy Rebo, Council members T.J. Boswell, Chuck Ekstedt, Shawna Kelsey and Crystal Denton were present to address the slate of agenda items to be discussed.
Consideration for a new business license to be awarded to Jackson Electric was tabled for further study and minimal discussion on claims – all of which were approved – both started the evening meeting.
Next on the agenda was discussion on whether to approve a moving expense contract for new Electric Utility Department Head, Clay Campbell, who recently arrived in Troy and has been getting to know the town and department with the help of recently retired department head, Clint Taylor.
Mr. Campbell has signed an offer letter with the electric utility, taken his physical, and is currently scouting the area for a place he and his family can rent or possibly purchase. Mayor Carr mentioned during the council meeting that he has also met with Campbell who seems to be loving the area. Campbell is currently scheduled to start work March 1. The moving expense contract was approved.
Nomination to approve Crystal Denton as President of the Troy City Council was unanimously and enthusiastically accepted by all present.
Approval for the purchase of a new Server for the Troy Police Department and Area Dispatch was also awarded. Following the recent wind storm which swept through the area, several fallen trees resulted in many people going without power for various intervals of time. Troy’s dispatch server had also gone down and it was determined a new server is currently and emergently needed. The new equipment will cost approximately $16, 340.00, and be covered equally by the Troy police and dispatch departments.
At the Jan. 13 City Council work meeting, Mayor Carr shared what he had learned regarding current selenium standards. Council has received ongoing input and corresponded with Dave Hadden of Headwaters Montana, Jim Dunnigan of Montana Fish, Wildlife & Parks, Greg Hoffman of the US Army Corp, Erin Sexton of the University of Montana and Flathead Lake Biological Station, Commissioners Jerry Bennet and Mark Peck, and many other sources.
On the agenda was consideration to approve a resolution in support of selenium standards currently being proposed.  Mayor Carr noted feeling that before expressly supporting the proposed standards, he believes more scientific information is still needed at this time.  As a whole, the council then moved to construct and review a letter of support aimed at encouraging continuing studies and information on selenium in area waters.
An appraisal amount with regards to the buy/sell contract for the annex building with Troy Volunteer Ambulance was also reported. That number came in at $150,000 and TVA agreed to that amount. Recently retired Electric Utility Department Head, Clint Taylor, suggested that some funds from the sale of the Annex Building be utilized to fund a new bucket truck for the city. Taylor’s suggestion was deemed viable but in need of further discussion and temporarily tabled. Discussions for final sale of the annex building will be handled by the Law Offices of Clifton Hayden and City Clerk, Tracy Rebo.
City Police have continued to meet their training goals with a recent Night Shoot Event and CAD/RMS systems training. The Department of Public Works has been continuing to address tree work following the recent storm and is still busy taking down Christmas decorations while tackling other routine duties.
Prior to adjourning the evening, the council also took a moment to wish Dave Norman of the Public Works Department the best of luck with upcoming his knee injury.

LCHD is working with multiple clinics in the area to develop one single list of individuals in Phase 1B because it is unclear which facilities will receive vaccine shipments first.

When vaccines arrive directly at the Health Department, they will continue to coordinate with all clinics and take a random sample from that 1B list to schedule inoculations for that week.

Phase 1B includes individuals that are 70 years of age and older, individuals 18 to 69 years of age with high-risk medical conditions and Native Americans and other persons of color who may be at elevated risk for COVID-19 complications.

“Our vaccine supply is very limited”, said Jenn McCully, Public Health Manager, “so please be patient with us as we move through the Phase 1B list.”

Please call the Lincoln County COVID-19 Information Line at 406-293-6295 to be added to the list for vaccinations. 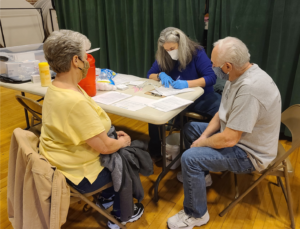