Christmas and Santa and all things jolly are not very far off and that should be something to which the kids in our community look forward. Unfortunately, the last couple years have been filled with extra hardship for many in Libby and, as a result, some children will be faced with a more austere holiday. The Our Kids Toy Drive wants to make sure that every Libby child is given the opportunity to have a merry Christmas. Tammy Brown, who has spearheaded the program since last year, is urging family members of children wanting to participate to get their sign-up forms in by Friday, Nov. 19. The forms are available at Diane’s restaurant and at Good News Christian Books & Music. The form includes both wants and needs sections.

Last year the program provided gifts for 380 local children. Although gifts have already started coming in, Brown has been reaching out to organizations such as CASA, Zero to Five, and Head Start, as well as local Libby businesses for referrals and support. Diane St. Onge, who is helping with the program, says it’s humbling what some of the kids ask for, such as sheets, toothbrushes, and toothpaste. Frequently requested items include hats and gloves, socks and underwear, balls, nerf guns, Lego’s, and dolls. To help ensure equitable distribution of gifts to all the children, instead of adopting a specific child, Our Kids prefers donations of cash, toys, or other goods which can then be matched to the wants and needs of each child.

Distributions will be made through Christmas as needed. Once available items from the sign-up sheet are ready, the family will be notified that they can come and pick up the presents. Libby historically really steps up for causes like this according to Brown, who became involved because she saw a need. “The gifts last year were amazing.” She is thankful for all the help in organizing and coordinating the program, especially Kayla Dupert, who she calls her “right arm” on the project.

If you or someone you know needs a little help this year making the holidays just a bit brighter for their kids, please come by and fill out a sign-up form by Nov. 19. If you wish to help out, you can drop off donations at Diane’s between 11 a.m. and 3 p.m. Monday through Friday. Every donation helps.

Let’s make Christmas jolly for all Libby’s kids this year. 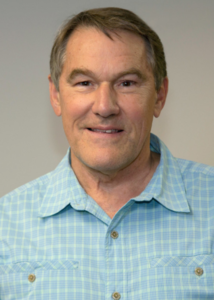 Dr. Black is the Chief Executive Officer at CARD and the

The Montana Public Health Association recently announced that Dr. Brad Black, Lincoln County Health Officer and former Medical Director of the Center for Asbestos Related Disease (CARD), will be a recipient of their 2021 Career Achievement Award. This award honors a public health professional who has committed 25 years or more to public health. Although the 2021 Montana Public Health Association and Montana Environmental Health Association Annual Conference was scheduled for September this year, it has been rescheduled for April 2022 and the award will be formally presented at that time.

Dr. Black was nominated by CARD, yet his achievements span not only his work at CARD in response to the asbestos public health emergency, but also his nearly 40 years as the county health officer. Most recently, he has worked tirelessly to help the county navigate the COVID-19 pandemic and implement measures to protect the health of local residents.

The narrative nominating Dr. Black for this award, in part, highlighted his long-standing commitment to the community. Dr. Black initiated a research program through which CARD collaborates with numerous universities and research institutions. In addition to co-authoring several journal articles, he has also presented the findings of this research to medical and governmental organizations across the United States and Australia. Dr. Black’s expert testimony regarding the pervasive nature of the asbestos contamination in Libby, causing both occupational and environmental exposure in adults and children of community, was instrumental in the 2010 Affordable Care Act including provisions for benefits to those affected by environmental public health emergencies.

“This award comes as a special surprise which left me momentarily speechless,” said Dr. Brad Black. “As you know, work in public health usually escapes appreciation by the general public. Many folks in public health are deserving of recognition, so I feel especially honored that MPHA has recognized my efforts on behalf of public health.”

“Having lived here for so long serving the community, he knows most of CARD’s patients and their families personally,” said Tracy McNew, Executive Director for CARD. “His expertise and compassion for those suffering from the effects of Asbestos Related Disease (ARD) have touched the lives of so many in Libby and the surrounding area, while his dogged advocacy for research to better understand ARD due to Libby amphibole asbestos, may one day lead to new medical breakthroughs that will improve the lives of those suffering from this disease.”

Libby’s first annual Quilts of Valor celebration is a success

To celebrate Veterans Day this year, local VFW Post 1546  teamed up with the Kootenai Valley Quilt Guild, and the national group Quilts of Valor to create Libby’s first annual Quits of Valor celebration. The well attended event filled the VFW auditorium with over 100 folks, and began with a free and delicious spaghetti dinner which was prepared and served by VFW volunteers.

Twelve beautifully designed and crafted quilts were made by the members of Libby’s Kootenai Valley Quilt Guild, a local club of talented, creative quilters, boasting 55 members.

To kick off the ceremony, Angie Pankey, president of the Kootenai Valley Quilters, reminded the crowd that the Guild is active all year round, making and gifting handmade quilts to community members in need, including 71 quilts given to the residents of the Care Center, and quilts made for anyone who has lost their home to fire. “We’ve been going strong for over 30 years,” Pankey said, “we meet the second Monday of every month and we have good snacks, because you have to have something to eat while you’re sewing,” she added with a smile.

Jule Mason then presented testimonials from earlier Quilts of Valor recipients, and explained that “Quilts of Valor” is a nationally recognized and registered organization.

Twelve local veterans were honored , they are listed as follows:

Everyone was touched and impressed with the beautiful quilts and the heartfelt honor and gratitude that pervaded the hall. This is sure to become an annual event. 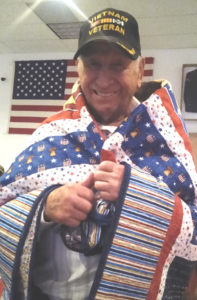 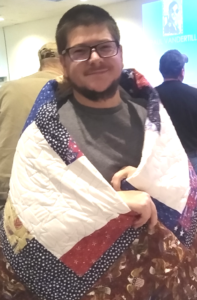