A public meeting entitled “Is Mining adding Selenium to the Kootenai River” was held in Libby on Saturday March 12. The meeting allowed concerned citizens to interact with experts in the field. The primary speaker was Erin Sexton, Senior Research Scientist for the University of Montana, Flathead Lake Biological Station where she has been focusing on the transboundary rivers between the United States and Canada since 2007. Also speaking were Dr. Shawn Young, Director of Fish and Wildlife with the Kootenai Tribe of Idaho, and Genny Hoyle, an aquatic biologist with the Kootenai Tribe of Idaho’s Fish and Wildlife Program.

In 2021, after 6 years of study and debate, the Montana Department of Environmental Quality, in conjunction with the government of British Columbia, First Nations and local tribes, and other stakeholders, agreed to change the acceptable standard for Selenium in the shared waters of Lake Koocanusa to 0.8 micrograms per liter. This has also since been approved by the Environmental Protection Agency (EPA), which had previously set a general 1.5 micrograms per liter standard for Selenium in watersheds but allows for stricter site-specific standards where there is documentation of continued toxicity concerns. As Sexton showed, levels of Selenium increased dramatically between 1984 and 2014. This occurred due to coal mining in the Elk Valley of southern British Columbia. One of the largest coal deposits in the world underlies the basins of the Elk, Fording, and Flathead rivers just over the border in Canada and there are currently 5 mines in this area, 4 of them active, with 3 more proposed for the future, although by previous agreement mining is banned in the Flathead basin. Once the mountains containing the coal are blasted, the debris is moved to the valley floor where contaminants such as Selenium, previously locked within the rock, are able to leech into the water and air. While some have argued that the mines have not had a significant impact on the levels of Selenium in these waters, Sexton presented data from the basin above the mines that clearly showed significantly lower levels of Selenium compared to those below them. At present there are permit requests for three new mines in the Elk Valley area which would potentially add further to the elevated levels.

The previous water standard in British Columbia was 2 micrograms per liter, but in the highest unit below the mines, levels were found up to 57 micrograms per liter in 2014. Residents in those high concentration areas had to find alternate sources of water because it exceeds levels considered toxic to humans. At that time,  Teck Resources, the owner of the current mines in the Elk Valley, agreed to a management plan to decrease the levels of contamination from its mines at the international boundary to 2 micrograms of Selenium per liter or below. The primary modality for this,  in addition to building covers for the tailing piles to decrease the runoff due to precipitation, was the building of several active wastewater treatment facilities between the mines and the border. The initial such plant was constructed in 2014.

By 2016 a significant fish kill just below the dam was noted and it was found that the treatment process being used actually converted the Selenium into a more toxic form. That plant was offline until 2018. A second treatment plant is set to open this year. The last of the five planned treatment facilities is not expected to be up and running until 2032. Since the methods being used are proprietary, little is known about them and the adequacy can not be measured except by continuous monitoring downstream. This is an issue that will require a long-term solution, particularly as it has been shown that Selenium from mine sites may continue to leech into the environment for several years after the initial blasting.

Selenium is known to bioaccumulate, meaning that it is consumed by lower elements in the food chain, such as algae and aquatic vegetation, that is in turn consumed by stoneflies, caddisflies, and mussels which are main food sources for fish. As such, the higher in the food chain, the more food an organism requires, and the more likely it is to have higher levels of Selenium. Some fish are more susceptible to selenium toxicity than others, particularly in relation to the effects on reproduction. As such, the egg/ovary standard concentration of Selenium is used as a marker for the effect on fish species.  According to Dr. Young, who works with the Kootenai Tribe of Idaho in their decades-long effort to bring back the normal fish population of the Kootenai River after the construction of the Libby Dam, the now rare burbot seems to be the most sensitive as the population has dropped to negligible levels.

It’s National Library Week! Stop by the Libby branch of Lincoln County Library during the first week in April and participate in Spirit Week activities. Each day will include a special dress up theme as well as an activity. Prizes will be given throughout the week for event attendance as well as for participating in the daily dress up themes. Our schedule of events includes:

April 4: Social Media Monday! Dress Up: Pajama Day! Mondays are the hardest days to drag yourself out of bed. Make it easier on yourself and wear your favorite PJs.

Tag Lincoln County Library in a social media post and be entered in a special drawing. Extra entries if you leave a review or post a picture of you and your favorite book.

12 pm. The Gracious Table will lead a cooking demonstration. Learn how to make homemade tortillas and enjoy a delicious lunch.

April 6: Workout Wednesday! Dress Up: Whether you’re working outside or just working out. Wear your work out gear!

April 8: Family Fun Friday !Dress Up: Matching Day! Team up with a friend or your family and dress alike!

Come by the library for family friendly fun all day long. Enjoy a range of games, coloring, and other activities! Snacks to be provided throughout the day.

Don’t miss out on these great events held at the Libby Library. Check out our Facebook page for details and other upcoming events.

The Kootenai Karacters’ cast and crew have been working diligently on lines and scenes and sets and costumes and choreography… with vocals and orchestral music in this very popular play – for TWO years now!  Unfortunately, the two earlier attempts were shut down by Covid.  It has definitely been a long journey, but it will happen this time.

With less than one week until curtain time, dress rehearsals, with a cast of 31 actors of various ages (from 5to 98*), are scheduled in preparation for Opening Night of this their first large scale musical since The Music Man was successfully performed on the Libby Memorial Events Center stage in 2019.

The lead characters which carry the show are familiar faces to Libby theater-going audiences:  Amy Smart portrays Dorothy; Jolee Holder-Cutsforth looks for a brain as the Scarecrow; Brian Bell is seeking a heart as the Tin Man while Scott Johnson is hoping to gain courage for his character, the Cowardly Lion.  Throwing suspense and fear into the hearts of many will be Cynthia Curtiss as the Wicked Witch of the West.  Their scenes are backed up by the other 28 cast members. 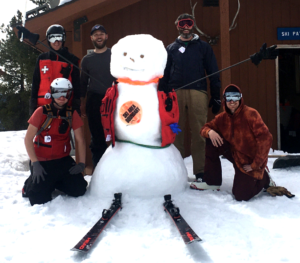 The final day of the Turner Mountain ski season came to a close this Saturday, March 26. It was a great day, full of intermittent spring sunshine, slushy snow, and smiles. People whooped as they whizzed down the hill, having a blast one last time. A big thanks to Kootenai Winter Sports; keeping the mountain running through thick and thin. A loud shout out to the hard working groomers who combed the mountain day in and day out, rain, snow, or shine. Token of gratitude to the kitchen staff for feeding the people, and to Perry and crew down at the rental shop. A grand salute to the dedicated lifties who kept the seats down and the wheels spinning, and of course, the Turner Ski Patrol, making sure everyone was safe and sound for yet another rowdy run. Finally, a large roar of appreciation for the persistent, fun, and thrill-seeking skiers and snowboarders who shredded the slopes this season. Have a great summer and see you when the snow flies once more.