Flathead Electric Co-op crews work to clear debris and restore powerlines
following the unprecedented windstorm which travelled through  Lincoln County and its surrounding areas on January 13.  (Photo Courtesy of FEC)

The unprecedented storm system that raged through northwest Montana and Northern Idaho on January 13 of this year blasted our forests and mountains with 70 – 100 mph winds in some locations. The tempestuous forces resulted in violent upheavals of trees of all species, diameter, and height. Whole stands were laid out, and in many cases both root systems and trunks were vaulting like spears across rivers, powerlines, creeks and roads. Along the Bull River, a strong wind was funneled between the East and West Cabinet Mountains and tenaciously tore out and tossed shallow rooted trees such as spruce, cottonwood and birch in a wide swath from 150 to 200 feet wide in some areas.

Northern Lights Incorporated, which serves Idaho and western Montana, reported more than one million dollars in damages. Power was unavailable to over seventy-five percent of the company’s customers. Crews worked around the clock maneuvering at night through roads blocked by both trees and powerlines.

Flathead Electric Cooperative (FEC), who’s service territory runs roughly from Glacier National Park and southeast to near Trinity Mountain, then adjacent to the Great Bear Wilderness and southwest into the Swan River Valley, west to near Trout Creek and up north through Libby to about Gold Hill before tracking back east to Glacier Park, is an irregular rectangle which even without some portions of the Kootenai and Flathead National Forests is an extremely large coverage area.

“In terms of costs and damage, this was the most significant event in our recollection,” shared Wendy Ostrom-Price, spokeswoman for FEC. “We have experienced several large outage events in the last couple of years driven by the wind, which is adverse change in the weather pattern for our heavily wooded service territory, but the January 13th event was the most significant in terms of costs (still being tallied) and damages.”

Trees continued to be laid across power lines, causing the one line up and one line down pattern to continue. Many of us here in northwest Montana have sawed for a living at one time or another. We know it is a skill game and a dangerous trade. Mishaps can occur in broad daylight on a log deck when saws kick back. Imagine working in the dark with 35 mph winds, heavy rain, trees and tree branches scattered about, then needing to be careful around powerlines that are supposed to be disconnected – yet there is always a chance they could still being “hot.” The power crews have a motto, “Want to survive, assume it’s alive.”
Work and restoration had been moving along steadily for FEC, but was then slowed by scattered debris, damage to the system, and more steady winds. At the height of this storm approximately one third of all FEC members were out of power. It took five days for full restoration to be achieved.

“We are actually still cleaning up and have had to plan some outages since then to make safety repairs,” added Ostrom-Price. “It was all hands on deck, with around fifty in the field at any given time from linemen and servicemen to substation workers, warehouse and delivery people, etc., and some mutual aid.”

“Because the storm wreaked havoc across our service territory (5,000 miles of line) from one end to the other, were it not for the collaborative spirit among cooperatives, restoration efforts would have taken even longer. Thanks go out to line crews from Rocky Mountain Contractors, Lincoln, Glacier, and Ravalli Electric Co-ops, as well as to the tree crews from Aspen and Associated Arborists.”

And from all of us in Lincoln, Sanders, and Flathead counties to everyone at Northern Lights Incorporated, Flathead Electric Cooperative, and all who helped to restore power to our areas in any way, we send our sincere appreciation to every one of you.

Mr. Hantz had last been seen leaving his residence on the afternoon of  Monday, March 22, with his dog and was driving a side-by-side utility vehicle.

While Mr. Hantz is known to enjoy exploring the backcountry in the Libby area, a neighbor became concerned when he failed to return home. It was then they called to notify family members and the Libby Police Department.

LPD then requested assistance from the Lincoln County Sheriff’s Office which organized a search conducted by David Thompson Search and Rescue.

Mr. Hantz was located on Wednesday afternoon, March 25, in the Barron Creek drainage near the Koocanusa Reservoir where his utility vehicle had become stuck in the mud two days earlier, according to Lincoln County Sheriff, Darren Short.

Mr. Hantz had run out of fuel on Wednesday morning and had started walking when he encountered the search and rescue team which had been deployed in an effort to locate he and his dog.

The pair were found to be safe and cleared to return home following an evaluation of Mr. Hantz by personnel from the Libby Volunteer Ambulance.

“Mr. Hantz and I also spent some time talking about the
advantages of carrying a SPOT or In Reach satellite communicator for future treks to the backcountry,” said Sherriff Short when reached for comment.

“The devices can be programmed in advance and will send a help message, but also will give coordinates via satellite which can then assist first
responders in locating a person or persons in distress.”

Short attributed the success of this past week’s recovery in large part to the attentiveness of Mr. Hantz’s neighbor who took note of usual routine and surroundings, then alerted
authorities
when they sensed some-
thing had gone wrong.

The moral of this past
week’s events: Stay alert, look out for your neighbors, be prepared for adversity, and if going into the backcountry for any outdoor venture, always give someone an idea of where you are going and an estimated time of return in the event you might one day find yourself in need of emergency
assistance. 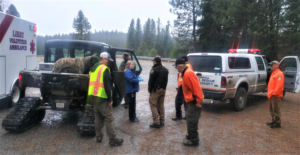 Following a two day search for John Hantz, members of the Libby Volunteer Ambulance
arrived on scene for a routine medical assessment before releasing him to return home.
(All Photos Courtesy of Lincoln County Sherriff’s Office) 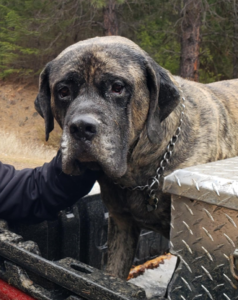 A HUGE Shout out to David Thompson Search and
Rescue for all your help in finding Mr. Hantz
yesterday,” wrote Lincoln County Sheriff’s Office
personnel in an online
release on Thursday, March 25. The post was shared following the
recovery of  Mr. Hantz and his dog who had been missing for nearly three days following a venture along the Kootenai River which had gone awry. “They were very happy to see everyone and are doing well,” LCSO concluded.

Permits are FREE and available from the
Lincoln County Health Department at 406-283-2442.

In Lincoln County, Air Quality compliance is required for every burn.

Call the Air Quality Hotline the day you plan to burn for updated
ventilation and burning forecast information at 406-293-5644.

Lincoln County Burn Regulations can be found at: