DEQ’s Myla Kelly presents information on the Elk River’s selenium levels at the Sept. 23 Special Meeting of the Libby City Council. Selenium in Lake Koocanusa and the Kootenai River is coming from the Elk River.

A recent Kootenai River water quality/fish tissue study yielded results that warrant further action according to Montana’s Department of Environmental Quality (DEQ) and EPA. Lauren Sullivan, of the Standards and Modeling Section of DEQ  said, “We’re not ready to cry the sky is falling, but it’s a very serious matter that we are taking very seriously.”

Last Monday, Sept. 23, DEQ and EPA representatives were in town for a special presentation to Libby’s City Council and others regarding their concerns over selenium levels in Lake Koocanusa and the Kootenai River.

Selenium is a naturally occurring nonmetal element that provides essential nutrition for life. In large quantities however, selenium can be toxic, affecting birds and fish causing deformities and  interfering with embryos which impacts reproduction, said Jason Gildea of EPA.

Fish are the most sensitive species, and a study was recently completed to better understand the selenium accumulation’s impact on them. The study’s most concerning outcome was that six of eight mountain whitefish analyzed exceeded EPA’s egg/ovary criteria for selenium. 142 fish of multiple different species were analyzed in the study. “This is a bit concerning,” said Gildea. He did reinforce that at this point, there is no concern for human health related to the selenium levels.

Increasing selenium in Lake Koocanusa’s waters is coming from the Elk River which provides 26% of the lake’s water. The Elk River’s selenium levels have been continuously rising since the 1980s, coming from mining waste piles in British Columbia’s (BC) Elk Valley. Other contaminants are also being monitored including mercury and nitrate, but selenium is the most concerning at this time.

The fish study was a collaboration between USGS, Montana FWP, Idaho Dept. of Fish and Game, the Kootenai Tribe of Idaho, and the EPA. Additional funding is being sought for follow-up studies.

In addition to the fish study, BC’s Ministry of Environment and Climate Change has been working with DEQ to develop a site-specific selenium water quality standard. A standard specific to Lake Koocanusa is important because “the way Se (selenium) bioaccumulates and moves up the food chain is very dependent on site-specific conditions,” according to DEQ’s meeting handout.

The lake is considered a threatened water body at this point because it will likely exceed water quality standards if current trends continue.

The site-specific standard is on track to be implemented by late 2020 which will allow for enforcement and hopefully reversal of these concerning trends. Additional public meetings and a formal public comment periods will be part of the process moving forward, said Sullivan.

As EPA prepares to turn over control of the Libby Asbestos Superfund site to Montana’s Department of Environmental Quality (DEQ), the question of who will pay for future clean-up needs remains to be determined.

The Libby Asbestos Superfund Oversight Committee met on Thursday, Sept. 19 in Libby for their ninth quarterly meeting since being established through state legislation in 2017. The group’s name recently changed from “Advisory Team,” to “Oversight Committee,” but in the meeting’s opening remarks, Chairman Mark Peck acknowledged that they don’t truly have legal authority over DEQ’s  or EPA’s decision making. He also said that despite this, local representatives on the committee will continue to push for what they think is needed to protect EPA’s remedy and public health into the future. Peck said that he would not apologize for or stop being pushy, but he does respect the agencies statutory authorities.

The committee is legislatively charged with (a) monitoring activities related to the site, (b) assisting in implementation of final cleanup and long-term operations and maintenance (O&M), (c) reviewing documents and providing comments and recommendations, (d) assisting in preparation and dissemination of reports and other information, (e) providing recommendations regarding administration of  site-related funds (f) helping to negotiate reduction of state and federal roles in long-term O&M of the site while increasing the role of Lincoln County, and (g) reporting to a legislature oversight group, the Environmental Quality Council each year.

The Sept. 19 meeting’s agenda included review and approval of prior meeting minutes followed by a budget overview.

Three separate types of funds are available for the asbestos superfund site’s ongoing O&M, but how and when they can be used is complicated. Even more complicated is the question of what happens if/when the funds run out? In total, at this time, available funds equal approximately $20 million and they need to last into perpetuity. Although this is a lot of money, to put it into perspective, Peck told The Montanian that over $500 million (25 times more than the $20 million) has been spent on the site over the last 19 years.

This debate over funding goes all the way back to 2001 when then EPA Administrator, Christine Todd Whitman told the citizens of Libby, “We will be providing homeowners with legal guarantees-called ‘A No Action Assurance’ -that will protect them from EPA’s ever seeking to have them assume the costs of cleanup… This action is our way of showing you that when we say we are not going to make you pay for cleanup, we will back that up in writing.”

Later in the meeting, Jamison gave an update on the work of the county’s O&M committee which, he said, is making good progress on a permanent plan that will soon be ready for public review. Property owner support, funding sources, and an uncertain timeline  were identified as areas of difficulty. Mike Cirian of EPA said in response, that lots of financial information would be coming soon including a projection of how long EPA’s available money would last. He asked for patience and apologized for delays.

Possible bylaws for the group were discussed and so was Lincoln County’s Guiding Principles and future direction for O&M planning, but consensus was not reached. Jamison expressed his disappointment that DEQ, he felt, did not engage in discussion of what he considers very important guiding principals, but instead prioritized development of bylaws.

The meeting ended with public comments from Tina Oliphant, Tom O’Bleness, and Brad Black who, by sharing personal experiences, all emphasized the need for answers sooner than later about how EPA’s remedy and subsequently, human health, would be protected into the future.  If funding is not available for future needs with construction, demolition and other land use change, it is likely that enforcement will not be possible which would endanger health and compromise all of the cleanup work that has been done.

In an Aug. 12 letter to EPA’s regional administrator, the committee wrote, “We believe an important next step will be for EPA, DEQ and Lincoln County to collectively engage in developing a common strategy, outlining how funds for O&M will be made available for long-term protectiveness of the Libby Asbestos Superfund Site.” The letter’s receipt has not yet been acknowledged.

Community members   are encouraged to get involved by attending meetings, reaching out, and sharing their concerns on the topic. Peck said, “There needs to be a face put to this. The public comments at that meeting really made an impact on the director.” 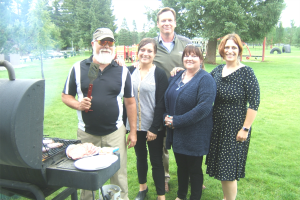 “We are expanding services to address physical and mental health as well as addiction counseling,” Executive Director, Robert Wigdorski told The Montanian. “If you get into treatment, you are going to get a complete mental health evaluation as well as a physical exam. We believe in the concept of treating the whole person,” he said.

Physical exams are currently part of gateways treatment plan in Kalispell, Thompson Falls and Great Falls, and, according to Wigdorski, they will be added to the  Libby clinic sometime next spring.

Gateway Community Services is one of the original out-patient addiction clinics in Montana. Established in 1978, and based in Great Falls, they helped over 900 clients this past year.

When Flathead Chemical Dependency ran into financial difficulties, and was looking at closing clinics in Kalispell, Thompson Falls and Libby, Gateway stepped up. “We felt that expanding to these clinics was better than letting them close and then having to start from scratch. The staff here in Libby will remain unchanged, we are very happy with them.,” said  Wigdorski.

Certified Addiction Counselors, Erin Jenkins and Bill Foster, and Office Manager, Carrie Denton, are working on creating a peer support drop-in center at the clinic, with couches, a TV and games. “We want to create a safe, comfortable space to be where there is someone to talk to,” Wigdorski said. “That way they are not somewhere they may be tempted to use. Libby deserves a good outpatient addiction clinic, and we are very happy to be here. We hope to have the drop-in center open sometime this coming spring.”