Opening day at Turner Mountain was on Sunday, Dec. 26, and with the fresh snow piling up who could resist a day on the slopes? It turns out that nearly no one could. Check out how long the lift line is.

Second Prize, four $25 gift certificates to The Shed, donated by The Shed, was won by Jessica Svendsbye.

The Heritage Museum is grateful for the community’s support of these fundraisers. Canceling the Holiday Bazaar two years in a row due to Covid has put a strain on the Museum’s finances. The Heritage Museum volunteers look forward to a healthy and prosperous 2022 and wish the same for all! 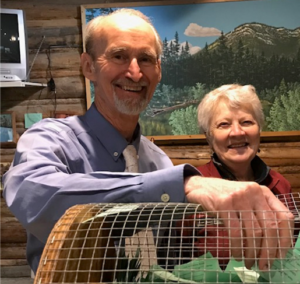 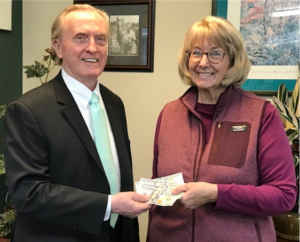 presenting the $400 cash prize to 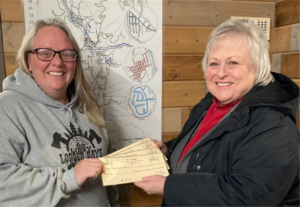 Share you Travel Memories with your community… A trip to Turkey 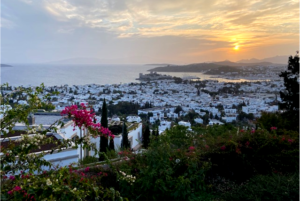 Travel opportunities have been few and far between for the past couple years. The Montanian would like to start a new column so that the community can share some of their favorite travel experiences with other readers. The article should be roughly 500-600 words long and include one high quality digital photograph that illustrates something from your story. Articles and photographs will be reviewed and edited before printing. We can’t guarantee that every submitted article will be used, but we encourage people to send their travel stories in, especially if you went somewhere unusual or especially meaningful to you. I’ll start.

In November, I had the opportunity to return to one of my favorite places, Turkey. A land of vast history which bridges Europe and Asia, what is now Turkey has been a crossroads for many civilizations – Parthia, Lydia, Urartu, the Hittites, the Greeks and Romans, the Byzantine Empire, the Mongols, and the Turks. There are snow-capped mountains, broad plateaus, dense forests, and coastlines that border the Mediterranean Sea, the Adriatic Sea, and the Black Sea. On this particular trip, we drove south along the west coast from Istanbul to Bodrum.

Our first stop was the Gallipoli peninsula, best known as the scene of a vicious battle during WWI between the Ottoman soldiers and ANZAC forces from Australia and New Zealand to control the Dardanelles, which provide sea access to the Black Sea. There are memorials on the battlefield to the many dead on both sides. Today, the area is a lovely pastoral patchwork of small villages, farms, olive groves, and wineries.

From Gallipoli, we travelled south along the coast, past the ruins of ancient Troy to the picturesque seaside villages of Ayalik and Foca. Ayvalik sports old Greek-style houses, many of which have been lovingly restored, cobbled streets, and a waterfront full of seafood restaurants. Foca is a weekend getaway for city-weary residents from nearby Izmir. There are two harbors, one a bustling destination dotted with boutique hotels, restaurants, and quaint shops. The other is surrounded by old homes with quiet cobblestone streets and full of the local fishing fleet, along with the occasional tour boat. The ancient Greek city of Pergamon rises over the surrounding valley not far away. The ruins at the acropolis were unusually quiet, given the winter season and ongoing COVID-19 restrictions, and overlooked the Asclepion, an ancient healing center.

After driving through the sprawling metropolis of Izmir with its 3 million inhabitants, we stopped to explore the huge ruined theater at Miletus and the Temple of Apollo, with its intricate carvings, at Didem. Weary from exploring and taking photographs, we moved on until we came to our final destination, Bodrum, which lies on a peninsula that juts into the brilliant blue waters of the Adriatic. The sun was setting when we arrived and the view from my hotel room was breathtaking. The town consists of white-washed buildings reminiscent of the Greek isles punctuated by arbors of brightly colored bougainvillea. Extending into the harbor from the modern boardwalk is a large castle built by the Knights of St. John from the ruins of one of the 7 wonders of the ancient world, the Mausoleum of Halicarnassus. The castle is now a museum. Along the myriad of narrow winding streets at the bazaar in the center of Bodrum, you can find almost anything you want and it is fun to spend an afternoon just looking around. Unexpected art dots the alleys in the form of vibrant murals, painted doorways, and inlaid tiles. Restaurants providing outdoor seating along the waterfront offer seafood of every shape and size, kebabs, traditional kofte (meatballs), pastries, and even pizza.

I had a wonderful trip, but your friends and I would love to hear about some of your favorite destinations, be they overseas or domestic. Let’s get everyone out of the winter doldrums, at least for a moment, and into their memories and imagination.