The Pitiful Players perform their rendition of 12 days of Christmas at Libby’s Christmas tree lighting event held on Friday, Dec. 6.

Troy’s community Christmas tree lighting event was held on Saturday, Nov. 30 with Santa and Mrs. Claus in attendance. They lit one of the nation’s oldest and largest living Christmas trees, had games to play, skits to watch, and treats to eat.   By all accounts, the event is an annual hit inducing holiday happiness communitywide.

In Libby, the tree may be smaller, and the celebration newer, but enthusiasm is not lacking. The Libby Area Business Association (LABA) hosted this year’s Libby Christmas tree lighting along with decorating contests. The town was abuzz last week with businesses on California and Mineral Avenues doing their best to “Light up Libby for the holidays.”

Winners were announced in the drizzly dusk on Friday evening, Dec. 6 at the annual tree lighting held at the same time as many local businesses’ Ladies Night festivities. Still, families came to see Santa, free hot cocoa was served by Aunt Ts, carolers performed including the American “Legion Grinch Gang,” the Pitiful Players, and local Boy Scouts. ‘Twas the Night Before Christmas was read by Amy Smart, and handmade prizes were awarded to Stytches, Glacier Bank, and The Pastime Bar for their efforts to light up Libby.

Check out Libby’s cheerful holiday business decorations when you are downtown this season, and don’t forget to drive through Troy too. Their annual Christmas lights contest brings the promise of brilliant light displays to brighten December’s dark cold nights.

A holiday tradition in memory of our loved ones

“When someone you love becomes a memory, the memory becomes a treasure.”  ~ Author unknown

Volunteer and bereavement coordinator, Jan Steele, began the service with words of welcome and comfort.

Longtime hospice volunteer, Jack Jackson, then took the podium, “I’ve lost a mother, sister, and this past year, a brother,” he said. “Hospice was there for our family, helping, giving us a leg up.” He asked attendees to look  around at each other. “Say hello to each other, that you may be able to give each other comfort, we all have grief in common. We are called to love one another, as we all need each other’s love and support to keep going,” he said.

Jackson has been volunteering with hospice for over eight years. “Some people helped me and my family,” he told The Montanian, “so, I thought it was time to pass it along. Some things you are just compelled to do, and the pay is great,” he added pointing up to the sky.

After Jackson’s remarks, the Kootenai Valley Bells performed, “The Little drummer Boy” and Hospice volunteers and staff read more than 130 names of loved ones who have passed, each followed by a bell rung by Kootenai Valley bells. As each name was read, Jackson lit a candle and placed it on the “tree of life.”

Hospice chaplain, Heidi Jones, then stepped up to speak. She offered these comforting words, “Take something you remember about your loved one, something that made them special, like the way they could find the good in people, or their humor, or the way they found ways to help and support you, remember the ways they expressed their love. Then, take it in and incorporate it into your life and actions.”

Kootenai Valley Bells played Gustsv Holst’s classic piece, “In the Bleak Midwinter” to a crowd that was openly touched by its exquisite beauty. Chaplin Jones offered a closing benediction, and afterwards those in attendance moved to the church’s lobby for refreshments and soulful visiting.

Home options Hospice is a service of Kalispell Regional Healthcare, with an office here in Libby located at 313 Montana Ave. They can be reached at (406) 283-7300. 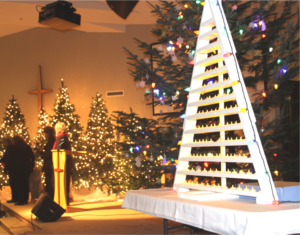 The “Tree of Life.” Below: The Kootenai Valley Bells  who performed two pieces at the event and also rang a bell for each name announced.

Dalby practiced for 53 years and his office closed at the end of last week.  Visitors appropriately signed in on a yellow legal pad and then with wine and food, they enjoyed a positive mood catching up on news and reminiscing about Libby’s past: what has changed and what has stayed the same.

Dalby’s law  office has already been sold and may soon be converted to a rental property. Although he will be moved out before this paper is read, he doesn’t plan to move into complete retirement quite so quickly.  “I’ll be taking some work home. There are still files to work on and close out,” he told The Montanian.

Dalby’s legal assistant for the past four years, Judy, joked with his wife, Patti, and others about needing a new job, but she too was optimistically reminiscent. “I have enjoyed withing with Steve,” she said. “He has been a good boss and it has been a good four years. He took me in and helped me out even though I had no legal experience before.”

We wish you all the best Steve. Thank you for your commitment to our community and don’t work too hard from home. 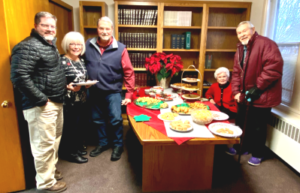 Dalby poses with his wife, Patti and a few visitors for a quick photo during his retirement open house held on Friday, Dec. 6.  From left to right: Matt Cuffe, Patti Dalby, Steve Dalby, Ann Andrew, and Ted Gardner. Photo by Tracy McNew, The Montanian.

into U of M’s hall of fame

Vince Huntsberger, son of Gary and Kate Huntsberger of Libby, grew up locally. He went to the University of Montana and afterwards became a physician. He now works as a ER doctor in Sandpoint, Idaho and  although his college days are long gone, his college football career is sure to be remembered.

Huntsberger was a defender on the Griz football team from 1998 until 2001. He was a star, the team captain, and he still holds the Griz record for 393 regular-season stops in his career. He even received a vote for the Heisman trophy in 2001.

For his achievements, Huntsberger was recently inducted into the Grizzly Sports Hall of Fame. The event was held on Friday Nov. 15 in Missoula and Huntsberger’s parents made sure to attend. “He is one of 58 inducted in school history dating back to 1893,” said his mom, “We are so very proud of him.”  Photo courtesy of Kate Huntsberger. 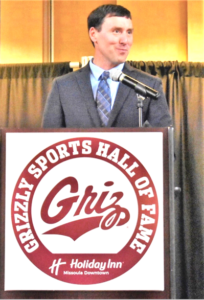