The City of Troy held their Annual Christmas Tree Lighting, on November 26. The gathering has been held in the town of Troy for over eighty five years. This celebration has brought the Troy Community together for many generations. 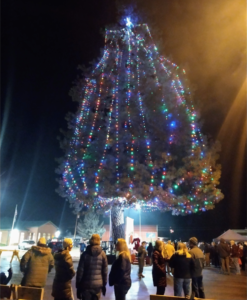 Over two hundred families gathered around the decorated Ponderosa Pine Tree to celebrate the holiday season. Mr. and Mrs. Clause arrived at 5:55 p.m. on a horse drawn chariot to greet families. A large line of children of all ages visited with Santa and describe what they wished for during the Christmas season.

The grinch made an appearance, brining joy and laughter throughout the crowd. Multiple games were set up in front of Gambles Handwear for families to play, and hundreds of cookies, coffee, and hot chocolate were donated and served. Multiple fire pits were kept lit to keep people warm during the chilled evening.

At 6:00 p.m. The Tree was lit and the community cheered in excitement in it’s glowing presence. The large star on top can been seen from miles away.

“I have been coming to the Troy Tree Lighting since I was five years old.” Said Sarah Morkeberg a Troy resident.

A sign under the tree is transcribed with the words “Our Troy Christmas Tree. “

The early boom period for Troy ended in 1926 and 1927 when the Great Northern Railway closed its division yard and fires destroyed the mining and sawmill facilities. Despite the following hardships on the town, citizens continued to encourage optimism in the community. In December 1931, this Ponderosa pine was wired with lights by the civic improvement committee and the Troy Commercial Club.

Periodic replacements of lights, wire strands and electrical upgrades have maintained this cheery exhibit. Our tree has been lit every Christmas season since 1931, except in a national blackout period during WWII. Our tree is greater than 150 years old, and over 80 feet tall. Troy can boast that this is the nation’s largest Living Christmas Tree.” Source, Jim Calvi

Many volunteers, Troy officials, and city employees work hard every year to bring this celebration to life.

“This event bring joy to our community every year.” Said Tina Moore, the Owner of The Lincoln Theatre.

The Theatre opened at 4:30 p.m. for sing along Christmas Carols and a wonderful Christmas Story on the stage. The Theatre also provided hot cider and popcorn, along with bathroom access, and a place to warm up.

The Annual Christmas Tree Lighting in Troy is a cheerful event that really kicks off the holiday spirit in Troy each year.

The competitors used single shot .22 rifles with iron sights at 50 feet. They shot 40 shots in each of the kneeling, prone and standing positions. To score a 10 they must take out a dot not much larger than the period at the end of this sentence.

Twenty-four participants from across Washington and Idaho would complete the course of fire. Salix Harris, a student at Troy High School, competed in the under 15-year-old group, and would finish in 3rd and the 1st place female.

If you are interested in learning more about the sport of competitive shooting, stop by the range, located on Highway 2 about 2 miles east of the 3-mile junction, during practice on Thursday evenings at 6:00 pm PST or call Don Jordan at 208-610-0226. 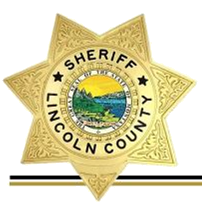 Burglary In the early morning hours of November 20, 2022, Lincoln County Sheriff’s Office Dispatch received a report of a burglary that had just been discovered at the Saverite West gas station and convenience store. Deputies from the Lincoln County Sheriff’s Office responded and met with the store owners. It was determined that someone had used a key to enter the store and had stolen a bank bag containing approximately $2000.00 cash, receipts and checks. The investigation is ongoing.

The Troy City Council Meeting was held on November 16, 2022 in the Troy City Council Chambers. Following the Pledge of Allegiance Shawna Kelsey lead the meeting as the Mayor Chuck Ekstedt was absent. Public comments on matters on the agenda was the first item on the agenda, there was no comment. New business was next on the agenda to be discussed. C McBride Construction and Milling was evaluated for a new business license in Troy. The business would provide custom log milling, and all construction services. Each council member voted all in favor for the new business license. 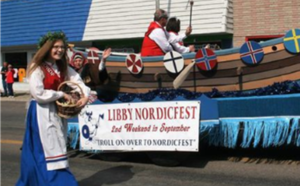 Deadline to RSVP is noon on Dec.1.

For the fifty-third year local bird watchers will participate in the Audubon Christmas Bird Count in the Kootenai Valley on Saturday, December 17. This effort mobilizes over 72,000 volunteer bird counters in more than 2,400 locations across the Western Hemisphere to help scientists monitor the health of bird populations. Those interested in participating either as field observers or watching and recording at their own homes, especially those with bird feeders, please contact Gene Reckin at 291-8482or 293-9344.