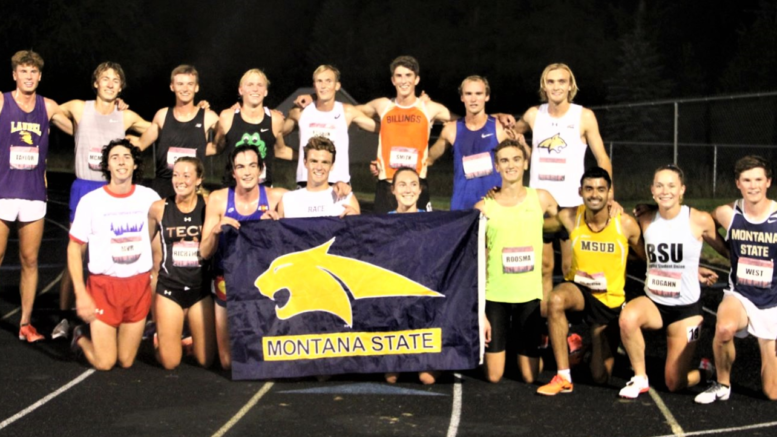 Duncan Hamilton, bottom-row center in white t-shirt, was grinning from ear-to-ear with joy as the final 5000m race of the First Annual Montana Distance Festival came to a close on Saturday, August 21. “I am on cloud nine and so excited for next year,” he said of the event which brough both competitive and amateur athletes to the Libby High School track with a common love for the sport of long-distance running.

“I went to high school in Bozeman and have
been a Bobcat for my entire college career,” Duncan
continued to share. “I am starting my fourth year at MSU and this was also my first year at the Olympic trials, where I competed in the 3000m Steeplechase with Isaac Updike.”

At the trials, Duncan had set a new personal record of 8:25 in preliminaries to make the finals.  This was a huge race in his running career thus far.

As Hamilton’s platform at the Olympic trials brought more attention to the Montana Distance Festival, he had heard after returning home that Isaac was thinking about signing up for the race. “I was so excited to have him sign up. I dream of this event growing to include more professional runners and faster fields. Issac’s registration in the event brought MTDF one step closer to that dream.”

Updike was at the Olympic Trials for his second time this year and indeed his sites are tentatively set on 2024. Like Duncan, running came rather naturally for Isaac. Though he used it more in other sports as a younger
athlete—soccer competed with scholastic running, and he certainly loved that sport more at the time.

When he found out about the Montana Distance
Festival being held in Libby, Isaac was ecstatic to sign-on. “My grandparents, Les and Shirley McKean, raised my mom, Shirley, here. It was pretty cool to be able to come back and race on my mom’s ‘home track!’”

Updike himself went to school in Alaska and ultimately walked onto Eastern Oregon University where he ran through his college career and garnered a handful of NAIA All-American titles and one Steeplechase National
Champion title.

From there, he continued to pursue the sport and joined Team Run Eugene. He then qualified for the 2016 Olympic trials and also made it to those finals, coming in 11th or 12th overall. Then it was on to New York where he still
currently trains with his coaches at Empire Elite.

As he was leaving Logger stadium on Saturday evening, Isaac was overheard telling Coach Zeiler, “Oh yes. I’ll be back! And I hope to bring some more people with me.”

“I think it was a lot of fun to have all different ages and levels of runners on the same track,” Updike said. “Most of the races I do are very regulated and curated to the top of the top runners. So for some of the younger racers to be able to step to the line with a ‘professional’ I think was a truly unique experience of which I was so happy to be a part.”

“I am definitely looking forward to working with Duncan to bring this back again in the future,” shared LHS Coach Zeiler.

“When Duncan contacted me last year, I was thrilled. I am always seeking ways to bring more distance running to Libby,” Zeiler added. “I look forward to working with him to make this a much bigger event in the future. It’s not just the records—it’s the connection and the camaraderie that binds the running community. I truly appreciate all the community and administrative team did to make this possible!”

Amidst the 30 or so athletes that took to the track on Saturday night were a respected handful of Libby Loggers youth. Coulter Anderson, Reed Scott, Cody Watson, Bridger Moe, Barrett Moe, Cody and Whalen Katzer, Julianna
Shumate. “We all find that running is a constant pursuit. However, it’s also a way of a successful life,“ Zeiler added. “I have to admit it would be very intimidating to run alongside any one of those college or professional athletes! Our kids did amazing out there on the track.”

Hamilton agreed. “Seeing those kids run next to professional runners warmed my heart,” he said. “I hope I can help get more kids hooked on distance running, get them out there having fun and maybe striving to hit some really fast run times, too!”

Following a successful track meet this past spring in Los Angeles, Duncan had started to research record times for the state of Montana. Not as easy to track down as one might imagine.

Three of those times were left standing, with the
women’s mile smashed by University of Colorado alumni, Makena Morley, who now trains for Asics in Bozeman and came across the finish line in a remarkable 15:46.

“I just want to give a huge shoutout to all the support that I had in making this event possible,” Hamilton said in closing on Sunday evening. “Rodd Zeiler was super helpful right up to running the timing booth last night. My dad, Ryan Hamilton, was a top-tier volunteer – driving 6+ hours to help me run the meet and there were many volunteers from LHS including track coaches, high schoolers and
parents that allowed everything to run smoothly.”

“I am in awe of the vast support network of Montanans and the Montana running community that has given me so much. I am on cloud nine right now and so excited for next year!”

“Following the spirit of this weekend, I would enourage those up and coming runners to focus first and foremost on
having fun with running,” added Updike in his closing remarks. “And that doesn’t just apply to running—it’s sports in general. It doesn’t mean as a kid you can’t take it serious and have hefty goals. But I think for all athletes to have longevity in their sport, they need to start out by having fun and finding their own reasons to push themselves and work hard.” 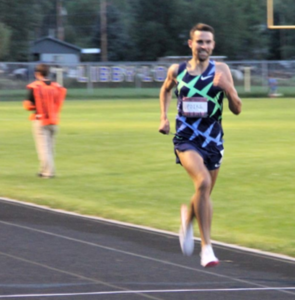 “I do think it would be cool to do a road mile which wraps up in conjunction with Ignite the Nites down the line? Could you

(All photos by Stacy Bender)

Juliana Shumate was one of the first Logger athletes to step to the race line in the Women’s mile alongside
several seasoned collegiate athletes during the 2021
Montana Distance Festival. Her example of what
Libby Logger grit and determination to finish the race at your personal best should look like was a shining example of why the event was organized.