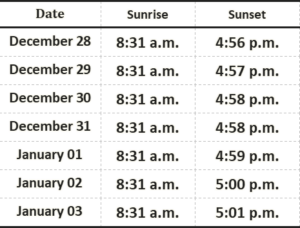 The people of Wakanda fight to protect their home from intervening world powers as they mourn the death of King T’Challa. .

Movie of the week
courtesy of moviefone.com

Pronunciation:
kêm-port
Part of Speech: Verb
Meaning: To behave, act, conduct (oneself). To agree, to jibe, be consistent

1937: The Irish Free State was replaced by a new nation called Ireland with the adoption of a new constitution.

1853: The United States bought land from Mexico to facilitate building a railroad in the Southwest, in what became known as the Gadsden Purchase, the last expansion of U.S. territory in the 48 states.

2011: Because of a change of time zone, this day was skipped in Samoa and Tokelau.

1879: Thomas Edison demonstrated incandescent lighting to the public for the first time, in Menlo Park, New Jersey.
1907: The first New Year’s Eve celebration in Times Square (then known as Longacre Square) was held in New York, New York.
1955: General Motors became the first U.S. corporation to make over $1 billion in a year.

1908: A ball was dropped for the first time in New York City’s Times Square to signify the start of the New Year at midnight.
1934: The U.S. federal prison at Alcatraz Island received its first inmates.
1962: The U.S. Navy SEALs were established.
1971: Cigarette advertisements were banned on U.S. television. 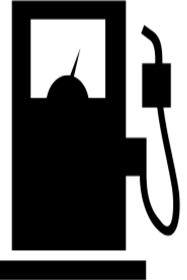 As of Monday, December 19th—

NATIONAL CALL A FRIEND DAY-  Take a few minutes, pick up the phone, and call that friend you’ve been meaning to get back in touch with.

TICK TOCK DAY-
This day serves as a reminder that the year is coming to an end.

CHAMPAGNE DAY – It comes at a perfect time on New Year’s Eve, especially for champagne lovers, giving us an even better excuse to pop open a bottle.

NATIONAL BUFFETDAY – Let’s be real – food unites us all. The ingenuity of buffets is the endless variety on offer.

FESTIVAL OF SLEEP DAY – Created to help you catch up on your Zs after a busy festive season.