The Flathead Electric Co-op Board of Trustees recently elected to retire a percentage of capital credits from 2008 member accounts. This month, over $2.8 million will be paid to Co-op members, both active and inactive.

This December’s retirement marked the first time that capital credit payments under $200 were credited to current members’ bills, rather than mailed as checks. This change saved Co-op members a significant amount of money in printing and postage costs, reduced the number of uncashed checks, and relieved members of the extra step of cashing or depositing a physical check.

The Co-op mailed checks to current members with credits over $200, and to inactive Co-op members, i.e., those who belonged to the Co-op in 2008 but are not current members.

When members sign up to receive electric service from Flathead Electric Cooperative, each becomes a member-owner of the Co-op, which is not-for-profit. One benefit of Co-op membership is the return of excess revenue to member-owners as “capital credits,” which are retired–or paid–as the Co-op’s financial condition permits.

Capital credits are not returned the year they are earned so that they can be used to fund electric lines, bucket trucks, and other needed equipment. This reduces the Co-op’s need to borrow money, and in turn, helps keep rates low for members. Amounts returned are determined by each member’s individual energy use during a particular capital credits year.

“We do our best to return capital credits to our former members, but when we can’t find them, our goal becomes reinvesting those dollars back into the communities we serve in the most meaningful and impactful way we can,” says Mark Johnson, Flathead Electric Co-op General Manager.

When capital credits go unclaimed for more than 5 years, Montana law allows them to go into a fund for education. For example, that fund provides the Co-op scholarships awarded each year. Recently, it afforded the seed money for Phase II of the Highway 2 Sidewalk Project in Evergreen, which will greatly improve student safety. 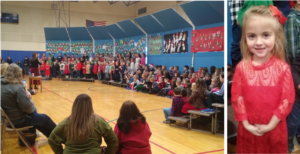 The Libby Elementary Concert was held on December 21 at the LES Gymnasium. The kindergarten and first grade class put on a spectacular show.  The show was directed by Olivia Hewston.  The gymnasium was filled with teachers, parents, guardians, and grandparents to show her support for the kids.

We all cant wait until next year, Photos by Moira Blazi, The Montanian.

Looking for a winter adventure? 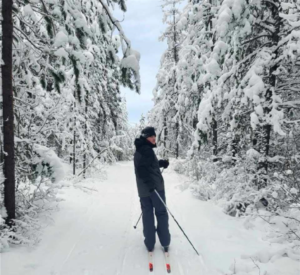 Try out the Norgard Trail on Nordic skis. Parking is available at the South Flower Ski Area parking lot,  ski down to Cabinet View Golf Course, turn around and earn an extra dessert skiing back uphill to your car. Or  park at the Golf Course and ski your way uphill. For all the fun, park at the Golf Course, start at the Ski Area and enjoy a fun ride down. The trail is approximately 1.75 miles (almost 3K) one way and is narrow in places. Grooming is intermittent. Photo courtesy of Kootenai Nordic Facebook Page.