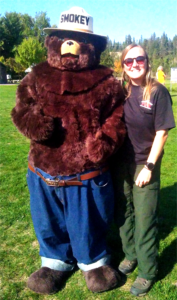 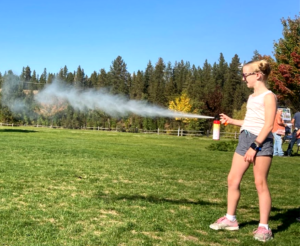 The Forest Festival was held at Riverfront Park in Libby on Saturday, October 1. This was the second year, and definitely a success. Vendors set up tents and tables across the lawn around 2pm, under a bright blue sky, and people gathered around to visit, and ask questions. There was face painting, cotton candy, a raffle, door prizes, and live music. Cabinet Mountain Brewing generously donated a keg of beer, bringing  delight to many. Those presenting were representatives of groups associated with the Kootenai National Forest. These groups included the U.S. Forest Service, Kootenai Climate Group, Idaho Forest Group, Montana Native Plant Society, Montana Fish Wildlife and Parks, Friends of the Scotchman Peaks, Yaak Valley Forest Council, and many more.

Kootenai National Forest spans east from the Idaho border to just past Eureka in the north, and Trout Creek in the South. This boundary is drawn on land which was and is inhabited by indigenous peoples for generations including but not limited to those of the Confederated Salish and Kootenai Tribes of the Flathead Nation.

According to Doug Ferrel, a co-chair of the Kootenai Forest Stakeholders Coalition (KFSC), “the idea behind the festival was to promote and celebrate the abundant resources that surround the community.” Tim Doherty, also a co-chair of KFSC, added “that they hope the festival will help raise awareness of everything the Kootenai National Forest offers.”

KFSC is a group whose aim is to represent the diverse issues with forest management in the area and provide feedback and input to those affecting said management. Bob Castaneda, an organizer of the event, said that the Forest Fair was an opportunity for different groups to express varying goals; spanning issues and activities including recreation, insects and disease, bears, timber, science, wildlife, plants, wilderness, and much more.

Many who attended commented on the value of the event within the community. Lincoln County Snowmobile Club thought there was a large turn out, and it was great because people don’t realize the many organizations that work with forested lands. Friends of the Scotchman Peaks Wilderness staff shared “that they were delighted at the wonderful community reception.” Erin Clark, another organizer of the event, stated “that KFSC was happy to see hundreds of residents come out and that it demonstrates how important forest is to Lincoln County.”

The KFSC would like to encourage the public to get involved! Ways to do so include going to kootenaifuture.org, as well as attending their quarterly meetings, which are open to the public. Additionally, stay up to date on local education events put on by groups such as Kootenai Climate Group, the Montana Native Plant Society annual meeting, or wilderness walks with Wild Montana. There are many resources, printed and online, about plant identification, forest management, bear safety, and anything that piques your interest about the forest, so get curious!

The Forest Fair brought a diverse array of groups together, which helps to illustrate the literal and figurative common ground on which many stand, despite some having views or taking actions that are seen as contradictory. This festival was an opportunity for KFSC, the public, and participants to see and partake in an act of learning, sharing, and acknowledging the importance of natural resources, and respecting everyone’s presence within the larger community of the Kootenai National Forest.

Forest management is a complex issue that takes ideas, knowledge, and action from many. As residents and recreators of the Kootenai Forest, and as public land owners, it’s a matter we are all invested in, albeit in different ways. The best things to do are ask questions, have an open mind, and get involved.

See more on the Forest Fair on our Montanian Facebook Page.