The Troy City Council Members had a work meeting on October 12th 2022. Only one member of the public attended this meeting. There was no public comment. The council members discussed the Symbiosa Agreement which is a GIS Management Services Company. According to Symbiosa’s website they provide GIS-centric Utility Information Management and Maintenance services, primarily to electric utilities, with a specialty in providing turnkey electric GIS management services to small utilities and high-level technical services to larger utilities. They specialize in EA model development and key utility information technologies to protect existing utility data by integrating it with pertinent peripheral systems. Symbiosa also provides, analyzes, and processes aerial and satellite imagery. All Symbiosa services are completed by employees within the United States of America and is 100% Combat Veteran Owned.

The Civic Plus Agreement was on the agenda for discussion because the formerly MuniCode was purchased by Civic Plus, they do all the codification of the ordinances of the City of Troy. This topic will be discussed during the general meeting. Council Member Shawna Kelsey gave an update on the Troy Outdoor Recreation and Tourism Plan stating the task force has had three meetings, about nine hours of through time. All the changes have been sent to the Montana Access Project (M.A.P). The plan should be ready for the next month Council Meeting to approve.

The Council Members discussed the purchase of land on Yaak Avenue in Troy. Mayor Ekstedt explained there are two lots ofor sale next to property that city owns. He would like to pursue but not at asking price. The discussion was held on uses for the property. Possible HUD housing or a new City Hall. The council decided to further discuss this in the general meeting.

Next on the agenda was public comments on matters not on the agenda. One Troy citizen mentioned having the light at the Troy Museum replaced and wanted to know if the new showers on the museum grounds are now operational. City Council member TJ Boswell reported that the showers are fully functional, but still waiting on a few more items regarding the hot water tank cage, door hinges, and possible electric door locks. Mr. Boswell also reported the Cabinet View Safety Services did air monitoring at the gravel pit while gravel was being taken out. There was not detection of asbestos, and they monitored the dust as well. The pit may need another test to move to another area.

The Bonneville Power Rebate Program (BPRP) was mentioned and discussed again. According to the City Council Work Meeting notes from October 12th, Mayor Ekstedt wanted to let everyone know the city has never done an industrial rebate program, he asked Council Woman Shawna Kelsey to recuse herself from discussion, because of conflict of interest with her business. Multiple members of the Troy City Council own businesses that fall within the criteria of the rebate program. According to the City Council Work Meeting notes on September 14th Lindsey Hobbs, the Energy Efficiency Representative from Bonneville Power presented to the Mayor and Council to give background information regarding the rebate programs offered to the City of Troy. “The energy efficiency rebate program enables economic viability for end users. It allows lower costs and less energy used for businesses and communities,” said Lindsey Hobbs. This rebate program is open to all commercial, industrial, agriculture, city entities, and residential homes as of now. The City of Troy is currently up to $60,000 of rebates for two years. The City will need to spend this money before next year or they will have to give back portions of the funding or donate it to another entities. Misinformation between the Troy power department and Mayor Ekstedt has led the council members to further discuss this opportunity in November 2022. The meeting was adjourned at 8:03 p.m.

The Troy City Council General Meeting was held on October 19th 2022 in the City Council Chambers. Around fifteen members of the public attend the meeting. Following the Pledge of Allegiance Mayor Ekstedt opened the meeting with public comments on matters on the agenda. No comments were made from the public on this issue.

Moving down the agenda with new business, the council members discussed a newly proposed business license called Next Vision Exotics, LLC. Jesse McCann discussed his business plan with the council and would like to focus on exotic pets and have a business that offers care, feeding, and essentials for an array of pets. Mr. McCann mentioned some of the exotic pets that he plans to sell are bearded dragons, axolotls, pythons, tarantulas, and more. The business will offer feeder mice, bugs, and natural foods for exotic pets, along with all the supplies they need. Mr. McCann mentioned networking with pet owners and local vet services to provide the best care for the specialized breeds. The council members voted all in favor for the new business license.

For old business on the agenda the council members discussed and approved Ordinance No 2022-818, stating the regular meetings of the City Council shall be held once each month on the third calendar Monday of each month, at the hour of 7:00 p.m. at the City Hall of Troy, Montana, or at such other place as shall be fixed by the city council. This Ordinance will take effect after January 1st 2023.

The council members discussed and approved the second reading of Ordinance No 2022-819. All members were in approval of the second reading. Mayor Ekstedt updated the property that is for sale on Yaak Avenue in Troy. He would like to get an appraiser to look over property and give the city a quote. All members of the council approved to move forward with estimate. The Department Reports are as followed. The building inspector is leaving at the end of the month. The council will rehire for this position and can advertise now. Safety training is happening through the City of Troy for all employees.

The City held the first Christmas Tree Lighting meeting. Planning is in process to close roads down and organize everything. There will be games, The Troy Library will hand out books for the kids, Bonnie Price is going to light the Tree, and the women’s group from the Baptist Church is going to bake cookies. There will be hot coco.  During the first week of December the City of Troy will decorate the haul road trees with the school students, 12 classes and 14 trees. The best tree that wins will get a pizza party. The kids will take down the decorations in January. The next Christmas tree meeting will be Nov 7th at 6 p.m. if anyone wants to help, please come.

The TCI Water Project is going on in Troy replacing old pipes and adding drainage throughout Troy. The green dumpster site has been reported to be a mess, with lots of landfill items ending up at the dumpsite. Mayor Ekstedt mentioned he called the county and they said they would still come and clean It up. The Deputy Clerk and Treasure reported the move in and move out’s for September was twenty. The amount billed for power and utilities was $127,551.62, the amount collected in September was $130,490.86. Ninety disconnect letters were mailed out and disconnects were four. The

Troy Power Department only had two outages, and worked on projects pertaining to installing wire, completed the second phase of the Troy Town Pump, replaced a lens for the walking path, and looked into two transformers. They also trimmed trees and did some training. The Power Department also has a high school student working with them. Clay Campbell the manager for Troy Power and Light turned in 4 lights for EE incentives to BPA. There were no public comments for matters not on the agenda. The meeting was adjourned.

By Ashley South, The Montanian.

It’s up to us. Respect access. Protect the hunt

In Montana, good relationships between hunters and landowners are integral to our opportunities, lead to proper wildlife management and ensure that our hunting traditions continue.

Landowners play an important role in sustaining healthy wildlife populations, contributing to our economy and communities by creating jobs, and providing valuable habitat and treasured open spaces. But the relationship between hunters and landowners can start to fray when just a few hunters abuse the privilege of hunting on private land.

To promote the importance of hunter ethics and improved hunter behavior, Montana Fish, Wildlife & Parks is partnering with other conservation and agriculture organizations to “protect the hunt.”

The campaign is focused on hunter responsibility and respect for private land and the access landowners provide. The slogan is: It’s up to us. Respect access. Protect the hunt.

“Through programs like Block Management, Montana ranch families provide free public hunting experiences across the state. We ask sportsmen to remain diligent in their actions and to protect access by respecting the places they hunt and holding one another accountable,” said Jim Steinbeisser, Montana Stockgrowers Association President.

“While hunters in Montana enjoy a wealth of hunting opportunity on our public lands, private lands in the state offer irreplaceable hunting access and vital habitat for our public wildlife. But access to private lands is a privilege that can be swiftly taken away from us,” said Backcountry Hunters & Anglers Montana Coordinator Kevin Farron. “We must show the utmost respect for these properties and their owners, know – and follow – the rules, and thank landowners for providing access whenever we can.”

While excellent hunter behavior might be the norm in Montana, poor behavior, like not following landowner rules, trespassing, abusing access privileges, littering, and a host of other offenses, can lead to a decline in access opportunities. In fact, many hunters don’t know that not following rules for a block management area can result in a citation for hunting without landowner permission.

Along with an outreach campaign, hunters and landowners can visit the FWP website for more information on hunting ethics, working with landowners, and to link to all the partners involved. 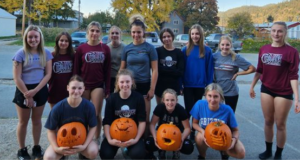 The Troy High School Volleyball lifting some spirits throughout the town. The team had a teamworking activity and made many smile throughout Troy. Go Lady Trojans. 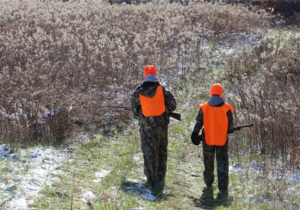 The Apprentice Hunter program allows anyone 10 and older to hunt with a mentor for two seasons without completing a hunter education course.