Physical science students at Libby Middle High School completed a STEM (Science Technology Engineering and Math) unit called the ‘Parachute Challenge.’ The goal was to use science and engineering practices to design and test a parachute that would safely transfer a raw egg to the ground. This was a ‘naked egg’ challenge in that the egg had no cushion, riding to the ground in a sandwich bag attached to the parachute. The safety of the egg was completely dependent upon the parachute design.

Students were to research parachute designs, draw up several different designs, build these parachutes, test the different parachute designs and then revise a design to use for the final drop.  While the test drops were done in the gymnasium, the final drop was from the 55.5 feet high bucket of the Flathead Electric bucket truck. Flathead Electric has been supporting the egg drop challenge since 2016.  The success rate this year was lower than previous years due to the ‘naked egg’ component. Out of a total of 35 parachute drops only 13 eggs ‘survived’ in that they may have cracked but had no leakage. This was a 37% survival rate. Only 2 of these eggs survived with no visible cracks. The final class had the advantage of a bit of snow cushion on the ground and wind that carried some of the parachutes and eggs into the small stream near the site.

The students at Libby Middle High School would especially like to thank Mac Holter, Stuart Spady and Cody Katzer of Flathead Electric for providing their time and expertise. 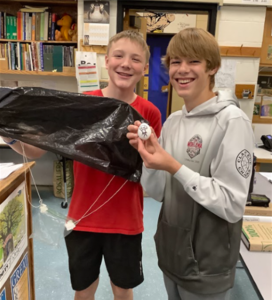 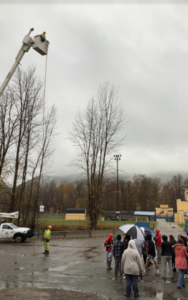 Students below: Mykah Hemmen-White with her successful drop and egg intact.  Colby Iliff and Boe Miles before the drop.  Their egg was not as successful- Photo Courtesy of Renée Rose