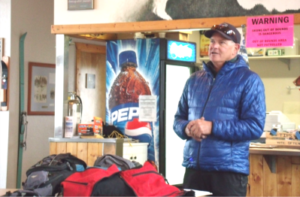 Ascending up the winding mountain road enshrouded in fog took some time. At the base of Turner Mountain, while parking at the Ski Lodge a few snowflakes fell, which seemed appropriate. Upon entering, a dedicated group of all volunteer Turner Mountain Ski Patrollers were already busy practicing the art of the rappel.

The term rappel is from a French word rappeler, literally meaning a recalling in the sense of bringing back to oneself. It’s a tricky maneuver to descend  a rock face or any near vertical surface by using a doubled rope coiled around one’s body. And yet, this colorful group of about thirty athletic looking individuals ranging in age from twenty to seventy years old, had come out on a rainy, cold Sunday, not for a fun day of skiing, but to make sure they had the art of the rappel down.

As David Neuman, Ski Patrol Director explained to The Montanian, “This training is concerned with multiple scenario’s.”

Ski patrol members need to be able to self rappel off the lift to help an injured skier. There are emergency packs stashed in several locations on the hill,” Neuman said. The training also addressed the situation where a skier might have to be lowered off the lift due to a medical problem, or in some cases if the lift were to seize up and stop working, and a skier needed to be lowered.

The teams also practiced with a rigging that had a hard plastic seat attached to perform this rescue method. In a situation like this, the ski patrol personnel might have to lower themselves, retrieve the medical pack, ascend and then treat, and also rig up the patient, and then lower them in a descending maneuver to bring both to the ground surface.

President of the Board of Directors of the Turner Mountain Ski Area, Bruce Zwang, said “The Ski Patrol members are an integral part of the mountain, they work very hard. We’re looking forward to another great season, and will be opening on Dec. 20.”

Neuman added, “This lift evacuation training isn’t the only thing the ski patrol does for mountain operations. Turner Mountain is one of the few ski areas in the United States that runs strictly on an all volunteer ski patrol.”

If you are interested in joining this unique team of the ski patrol, you can Email Dave at: Neufarmer@hotmail.com. 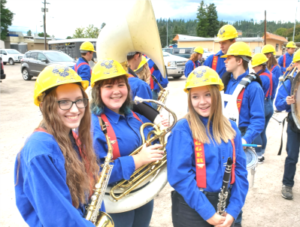 Matthew Krantz started his new position as Libby Middle High Schools Band director and at Libby Elementary School in the music program last fall. Krantz replaced Brenda Nogode, the previous band director who worked in Libby for 39 years before retiring. The Libby community was officially introduced to the new band director last year and the Libby High School’s first concert under his directions was last Tuesday, Oct. 23. This was Krantz’s first time directing a concert by himself, and it went off without a hitch. Mr. Krantz presented himself in an enthusiastic and upbeat manner.

Nogode had no problem handing over the reigns to Krantz stating in a previous Montanain article, “Mr. Krantz doesn’t settle for anything but the students’ best….His ideas and aim for quality are tip top.”

Krantz, originally from Helena, Mont., attended the University of Montana in Missoula. He participated in the U of M marching band, graduating with a drum major. The other two main instruments Krantz played while in college were saxophone and clarinet. Because of Kranz’s profession as a band director, he is also proficient in all the instruments played in a band.

Krantz is ready for the new school. “I am really looking forward to this music year for multiple reasons, however the part that most excites me is the growth that we will experience together. This is only my second year directing the bands here in Libby, which gives me a fantastic opportunity to grow with the students as we perfect our craft. As we develop together, I am most anxious to surpass the notes on the page and connect with what truly makes music do what nothing else can. I know we can achieve these experiences with this group, which makes coming in everyday a truly wonderful experience,” he said.