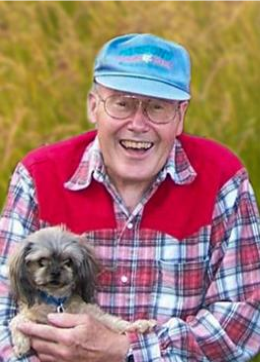 Williebee the balloon man entered into this world as Lloyd Franklin Wagner on Feb. 11, 1934 in Lincoln, Neb. He was the sixth child of John and Louise (Jaenicke) Wagner.

His childhood was impacted greatly by the lingering effects of the great depression, his father who abandoned the family, the rationed commodities during WWII, and the death of his brother Walter in the battle of Guadalcanal in Nov. 1942.

Lloyd worked as a grocery delivery boy and spent summers on his uncle’s farm in western Nebraska where he learned the value of hard work and developed an interest in tractors. He graduated from Lincoln High School in 1952. He was an average student in everything but mathematics where he excelled. He always said he studied a foreign language “ENGLISH.” He met the love of his life there, Judith (Judy) Hilligoss.  Imagine his surprise when returning her home from a date, her father met them at the door in full police uniform.

In 1952 the Boeing Airplane Company was touring the country testing students’ math abilities in search of machinist trainees. They offered Lloyd a Machinist Apprentice position in Seattle at 93 cents an hour. Judy came west and they were married Feb. 14, 1953. Lloyd used his farm and machinist training to become the ultimate do-it-yourselfer. There was almost nothing he couldn’t build or fix. Four children were born and raised at their small acreage in Renton, Wash. Also around the “farm” at various times were beef, goats, chickens, ducks, rabbits, pigs and sheep. Every year there was a huge vegetable garden as well. Lloyd retired from Boeing in 1989 and continued to be a machinist in his garage.

He discovered a Christian children’s program AWANA and became an ardent supporter. He was involved as game director for many years both in Renton, Wash. and in Libby, Mont. He took a class in making balloon animals and a new career and persona began. Lloyd felt that the gift of life, imagination and joy evident in children is clearly evidence of the presence of God.

In 1999 Lloyd and Judy escaped the rat-race and traffic congestion of Seattle by moving to Libby. They never met a stranger, just made a new friend. They enjoyed the peacefulness of living next door to the National Forest and the pleasant view of the Cabinet Mountains. Judy passed away in Oct. 2014 and Lloyd really began to slow down. After a persistent battle with pneumonia and heart trouble he passed peacefully into the presence of his Lord Jesus on May 1, 2019. 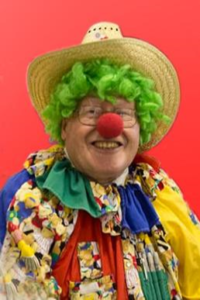