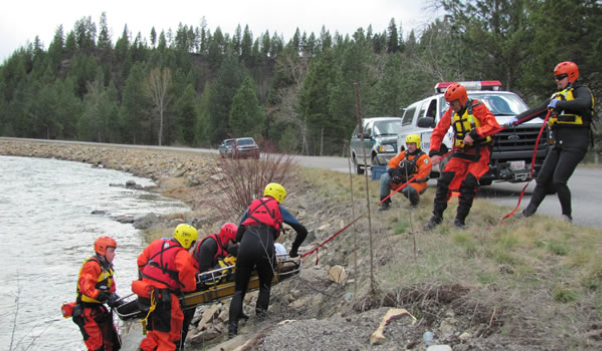 There is an old saying that goes, “A friend in need, is a friend indeed.” Many outdoorsmen and women understand the true meaning of this expression very well. Those who work outdoors in rugged and remote terrain are grateful and appreciative regularly as they head out into the back-country or remote areas, that David Thompson Search and Rescue (DTSAR) is alive and well in our beautiful corner of northwest Montana.

The story of how DTSAR started is a local gem. A newspaper article from Thursday, May 22, 1969  titled “Rescued unharmed after night in Cabinets” explains the organization’s beginning. It tells the story of a Libby woman, Naomi Cain 55, and Jennifer Nelson 10, daughter of Mr. and Mrs. Frank Nelson becoming lost for 23 hours when they went for a short hike from the campground area of Ross Creek Cedars.

Sheriff Fisher reported that the two apparently wandered off the hiking trail, and then followed Ross Creek upstream walking about five miles from the campground. Fisher, Deputy, Daryl Anderson, Jerry Kriner, other officials and volunteers organized a search party and got a big break when, responder, Stanley Peck, spotted a fire on the mountainside at about 2 a.m. Peck was bringing a stretcher and packing equipment to the searchers.

The three groups of searchers then joined together and made their way towards the fire. It was one of three fires  Cain had started to attract the help and stay warm.

Daryl Anderson told The Montanian, “We only had a sheriff’s posse, with not many people involved when the call came in about the woman and little girl lost near the giant cedars.”

John Williams, Jim Jensen, Criner, Dick Cole, Tubby Birch, and a few others volunteered to search for the missing woman and child. They hiked in at night, smelled smoke, and headed towards it. When they ran into snow and climbed up in elevation they had to descend again. They later met up with Jennifer’s dad Shorty Nelson, and began to plan their next efforts.

Later that night, Game Warden, Peck saw a fire on his way into Ross Creek Cedars. The next morning, all of the searchers got together, and along with Jennifer’s father they went in and within one hour had returned with the little girl and Naomi.

This incident led to the formation of DTSAR. Anderson said, “After that, we all decided we needed an organized effort to help find folks.”

Around Sept. 4, St. Regis paper company’s safety officer, Nick Mills, and mill worker, Shorty Nelson, local law enforcement, and others with military backgrounds, got together to start a search and rescue organization.

“We were funded with donations at first, and then put in a board of directors and picked David Thompson Search And Rescue as our title, out of respect for that amazing early explorer and mapper of the area.”

Jennifer Nelson who currently works as the  County Forester said, “I wasn’t afraid because I wasn’t alone and Naomi was confident and matter of fact.”

Nelson told The Montanian that when it got dark, the two had each other and John Henry, the dog. They teased John Henry to get him to bark to draw attention to their location. They gathered boughs for beds and covers to keep warm as well. They could see the lights of the search party below, and were comforted by knowing people were looking for them. “I think I even slept a bit,” Nelson said.

The next morning, they started down the mountain toward the searchers lights from the night before. They heard voices calling their names and they called back. Nelson remembered a very familiar voice saying “sit down right there and wait.”

About ten minutes later, she said, her father and Dean Atkins came out of the brush to find them sitting on a log.

“The moment they stepped into the opening is seared in my memory,” Nelson said. “There were two of the happiest, friendliest, most delightful giants that a lost-in-the-woods ten year old could ever hope to see, big grins on their faces. I was tired, cold, and hungry, but all I remember feeling was the huge relief of seeing my father’s face.”

Today, Anderson feels proud of what DTSAR has become. His daughters, Nicole, Stephanie, and Darylyn, all got involved. “I’ve always been highly proud of volunteer organizations,” Anderson said.

Anderson continued explaining that Montana, the fourth largest state in the country, could not exist without volunteers. They spend a lot of time and dedication contributing to the cause.

Today, DTSAR is a complex organization with boat teams; swift water teams; ice rescue; a canine unit; dispatch; a mountain unit; and an ATV/snowmobile unit. In an emergency, call 911, and ask to be transferred immediately to DTSAR if you are in need of any of these services.

The group needs more volunteers and funding. For information on volunteering and donations email Stephanie Anderson Whiteman at rose_red45 @hotmail.com or call 293-3556.

The community is also invited to come out and show support on Friday, Sept. 13 for the 50th Anniversary of DTSAR. There will be an open house at the barn from 5 until 6 p.m. Food and beverages will be served at 5:30 p.m., demonstrations will be ongoing, and a short ceremony will be held at 6:30 p.m. DTSAR is currently located near Riverfront Park in Libby.

Jennifer Nelson said, that everything turned out well, she made it home  unscathed, and she  has a great story to tell.

“The best thing that came out of this experience though was the formation of David Thompson Search and Rescue,” Nelson said.

On Thursday, Aug. 22 at around dinner time, the only occupied classroom in Asa Wood school was full of positive energy and gently tempered enthusiasm. Dance students filled the room while moms, familiar with one another and content to wait, were knitting and sitting in the hallway outside of the classroom. Miss. Karina, their teacher, told The Montanian that she enjoys working to strengthen the bonds between her students, whether they are children or adults, and those around her gladly affirmed her success in doing so. One parent described Karina as a “kid whisperer,” and others murmured words such as supportive, positive, inspiring, and caring. After class was over, no one was in a hurry to leave. One family stayed to donate their dress-up clothes presenting items one by one to their teacher, and others just stuck around to enjoy a few more minutes of conversation.

Karina Hancock, or Miss. Karina as her students call her, stuck around after class too, to share a little about how she came to be there. Hancock started Karina Hancock Dance about three years ago, she said, after receiving encouragement from a friend. “I’m grateful and thankful that I get to do something I love. It’s hard work though, and I consistently challenge myself.” She started dancing when she was nine. It resonated with her immediately, and her skill and passion grew over time as she learned the fundamentals of ballet, jazz, interpretive dance, flamenco, and other styles that allowed her personal creativity to grow. She credits her teachers for her ongoing love of dance, and this inspires her to do the same for her students.

Hancock teaches Creative Dance Movement with Foundations in Ballet according to her posters, but her students and their parents say that Miss Karina’s classes provide much more. They discussed improvement in their kids’ ability to focus, increased confidence, patience, finesse and self-control, development of an appreciation for classical music, and even improved eating habits as a result of her classes. Irina, one of the parents present, said that her daughter is home schooled, and dance is an opportunity for socializing in a safe and supportive environment that she loves. Another mom told The Montanian, “Her gentleness and joy are such a relief, it’s not something you find all the time.” A third mom, Alana, said, “Karina cares so much about the kids. She boosts their morale. After almost a year in her class, my daughter is a totally different kid dancing around the house.”

Miss Karina’s secret to success may lie in her ability to understand her students limits and build them up by encouragement, or in her no stress approach to dance that she calls “semi disciplined, organized fun.” One mom said that the balance between learning, practice, and free time makes her classes unique. Perfection is not required, there are no predetermined expectations, and embracing the music is highly encouraged. Having fun is a top priority, and a positive perspective helps too. One mom pointed out that Miss Karina always has a positive way of saying things. Hancock, a native Spanish speaker, credits having to translate from Spanish to English in her head for helping her choose positive and supportive words.

To sum up the sentiments of many, Kris Boyd said, “Karina has created a learning environment filled with love and joy for dance, and for each other. She has a patience and creativity that allows for my daughter and I to throw ourselves into dance without fear.”

A new dance season is just beginning, so enrollment is currently open. Classes are typically an hour and a half long and they are available in Libby and in Troy. Adult classes are available too. Hancock said that in her classes, “There are no cliques; we’re a team to work together, take care of each other, and help each other.” This environment allows children and adults alike to feel safe and have something to look forward to in dance lessons. Hancock is also getting ready to start Spanish lessons for children ages three and up. The course will be eight weeks long and can accommodate five to 12 students. For more information about Spanish or dance lessons, Hancock can be reached at 293-5345, at karinahancockdance@gmail.com, or by messaging her on her Facebook page at Karina Hancock Dance.

To witness Karina’s dancer students first hand, check out the Kootenai Harvest Festival and Nordicfest this weekend where they will be performing. They’ll also be performing at the Memorial Center Kick off Party scheduled for Sept. 21, and she is considering a nutcracker performance this winter.

Karina stands in the dance classroom in Asa Wood after class with some of her students and their parents.  Photo by Tracy McNew, The Montanian 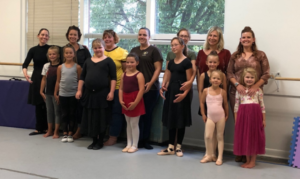