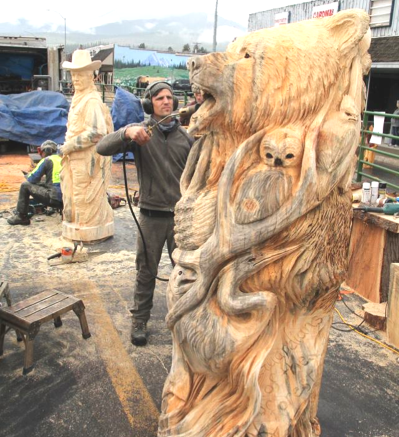 On the cusp of summer’s exit, and the cool colorful time of autumn, our somewhat remote, little northwestern Montana town will come alive with celebration from Sept. 12 through 15. Kootenai Country Montana (KCM) will again sponsor an International Chainsaw Carving Championship.

KCM is the brainchild of Paul Bunn whose aim is to help the area communities and people. Bunn, a patriot and businessman, is unswerving in his commitment, and diversified in his approach. Along with his staff at  KCM, he has organized and promoted this continually growing golden nugget, polishing it intermittently for success and paying for it at his own expense. The nugget, called the International Chainsaw Carving Championship, brings in top notch chainsaw carvers from around the world to participate.

Over twenty carvers will descend on Libby from California, Missouri, Washington, Pennsylvania, Vermont, Mississippi, Montana, and Alaska in the United States, and from Argentina, Slovakia, the United Kingdom, Australia, Zimbabwe, Canada and Japan internationally.

Steven Higgins, based in Missouri, will return for the third year. Higgins was the event’s Grand Champion the first year, and he has consistently been the king of the auction every year at the Libby event. KCM event organizer, Troy Douthit, said, “There are some incredible art pieces. The auction is a chance for folks to buy art for reasonable prices. All pieces at the show are available for sale.”

John Hayes is also returning for his second year. John is from Waterford, Ireland, and first gained attention when he carved a very old tree on the grounds of Fenor Church. His world record breaking sculpture from one piece of wood called Dragon slayer can be seen in the Waterford Viking Triangle. Waterford is also the location of Reginald’s Tower, where Viking sailors and settlers built the tower to defend the port. Reginald’s Tower has stood for over nine centuries.

A resident of Big Sky Country, Todd Coats is returning for his third year. Coats has sold his chainsaw carvings to people from all around the world. His pieces are from one foot tall to his largest, 43 feet in height. Todd has been carving for over 25 years and he has carved most every type of wildlife out there.

Neils Enjar Peterson is from Denmark and is coming to Libby as a first time competitor. Neils is a forester by profession and teaches forestry at a local vocational school. Neils’ childhood whittling grew into carving, and along with forestry has become his way of life. He has traveled all over the world attending events and competitions.

Zoe Dussia is from Pennsylvania and grew up calling two of the world’s best chain saw carvers Dad and Uncle Randy, but was out of college before she attempted it. Zoe has won numerous competitions, most notably the invitation only 2008 Coal Mountain Chevy Fest where she took first place. She has been featured in the Art of Chainsaw Carving magazine, and has competed internationally.

Events will take place all day on Thursday, Friday, and Saturday, with morning events on Sunday, and the final auction beginning at 1 p.m. that day with the awards presentation afterwards. To preview some cool carvings visit the KCM Art Gallery on Hwy. 2 in Libby.

Douthit said, “Our goal is to make it the number one Chainsaw Carving Championship in the world.” With Bunn’s dedicated staff of Troy Douthit, Lydia Mysse, Diane Hoover, Casey Fletcher, and Shae Munro, they just might do that.

For more information on the chainsaw competition visit carvemontana.com, email info@kootenaicountrymontana.com, or call 406-890-7140.

That same weekend, from Sept. 12 through 15, Libby Nordicfest will also be celebrating with live music, food, two parades, and crafts.

Also, the Kootenai Harvest Festival will be held on Saturday, Sept. 14 at Riverfront Park from noon until 6 p.m. with homegrown produce and crafts, fabulous food, Cabinet Mountain Brewery’s beer, and kid’s activities.

On Friday, Aug. 23,  Lincoln County Credit Union presented Troy’s Afterschool Program with a donation of $15,000. Lindsay Beaty (left) presented the check to Sylvia Maffit (right). Also present were Jacob Francom, Catherine McGinnis and Teresa Curry from Troy Public Schools, and Andrew Witherington from LCCU. The afterschool program lost grant funding this year but will be able to continue anyway thanks to LCCU and other sponsors.

“I can’t believe the gratitude I feel about this,” said Maffit. The  program will start on Sept. 3 and run Monday through Thursday from 3:30 until 5:30 p.m. 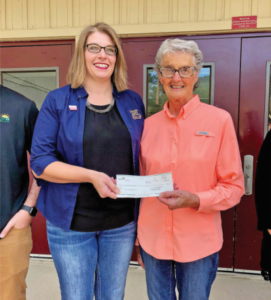 The Montana High School Association’s (MHSA) NorthWestern Energy Academic Excellence Award is given annually to one school in each class (AA, A, B, C) that reaches the highest grade point average among students. Libby was named the Class A winner for 2018-2019.

The grades of students who participated in extracurricular activities during the school year are submitted and then averaged to choose the winning school.

Craig Barringer told the Montanian, “It is always great to hear that our students involved in extracurricular activities are not only leaders in their sports and activities, but in the classroom.  This award was led by a special group of seniors that set a good example for their teammates for the upcoming school year.”

The announcement was made on Thursday, August 1 by MHSA. Libby’s  High School averaged 292 student participants out of 323 for a total GPA of 3.810 which was the highest among all four athletic classifications.

This is the first time  that Libby has been honored with the Academic Excellence Award, but the school’s faculty are more than certain Libby could attain the award two years in a row with the hard work of dedicated students, teachers and coaches.

The Class A runner up was Dillon, with an average GPA of 3.479. Billings won for class AA, Bigfork for class B, and Winnett for class C.

The award will be presented to Libby High School during homecoming celebrations in October.

Libby’s Nordicfest, a blend of culture and fun

Indeed, it is, despite sharing a weekend with the equally popular Kootenai Country Montana (KCM), Chainsaw Carving Championship, The Nordicfest Heritage Festival at the Libby Memorial Center will be joined by the Kootenai Harvest Festival and the Lincoln County Fiberfest. All of this is coming to downtown Libby on Sept. 12, 13, and 14.

KCM asked Nordicfest if they could hold their competition on the same weekend as Nordicfest, Peppenger said, and although working with the Chainsaw Carving Championship was not a unanimous decision by the Nordicfest board, Peppenger is positive about how the multi-festival weekend will pan out. “The whole thing will be very good for Libby,” she said.

As the internationally renowned carvers come up to Libby, local farmers, fiber artists, and community members will be very busy setting up at Riverfront Park, Asa Wood school, and the Libby Memorial Center.

Peppenger was sure to remind us that, despite the plethora of entertainment choices scheduled for that weekend, the Nordicfest Heritage Festival will be offering a full array of activities, including the ever-popular Nordicfest parade.

“We have over 80 registered entries so far,” Peppenger said, “and, because the carvers will be set up, down in the last few blocks of Mineral Ave., we have changed the parade route to go from Lincoln Blvd., down Mineral to Third Street, instead of Second Street. That’s really the only change,” she added with a smile.

“The Bunad traditional consume parade will be on Friday at noon, going from the Libby Care Center, to Mineral, then up to  the Memorial Center,” Peppenger reminded The Montanian.

Songstress, Shauney Fisher, will be performing at the Memorial Center, where quality crafters will be set up on Saturday, from 10 a.m. until 6 p.m. The Lincoln County fiber artists will be sharing their creations at Asa Wood School, and on Saturday afternoon, local venders, farmers and crafters will be hanging out down by the river at the Kootenai Harvest Festival offering a delicious, locally grown organic meal prepared by Gracious Table.

Whatever you tastes and interests, this late summer weekend promises to be a fantastic one for all. 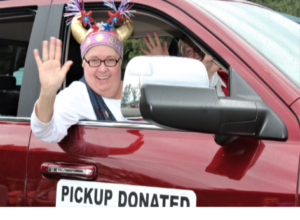