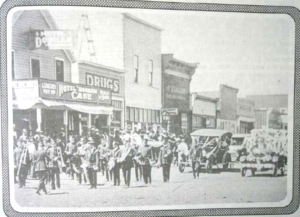 1897— Crude road system connecting kalispell to
Spokane, the roads were seasonal and traversable only during the summer months of the year.

July 1911—First car in Troy is brought from the Yaak for repair.

1912—First major road development and improvement began when Highway 2 was first proposed. First caravan of tourists arrived in Troy by automobile from
Kalispell.

1915— The Troy Echo reported, “All are high praise of the driveway, especially that part along the mighty Kootenai.”

The Troy Museum and Visitors Center welcomes you to step back in time this Labor Day Week and visit the thriving mining and
logging community that once was Troy.

Recall the 1910 fire that swept through the area; the harsh
conditions of winter and the warmth of the homestead.

When the railroad was king, the mines turned out gold and
silver, and the backstreets and taverns saw patrons eager to spend

their hard-earned wages. The artifacts on display will carry you to such place and so much more.

The locally staffed archive of local history is excited to be open and welcome both locals and passers-by each Tuesday – Saturday from 11:00 a.m. –5:00 p.m. for the duration of the 2021 Season.

Pack a lunch, wander the nature trail along Callaghan Creek, challenge your friends and family to a game of disc golf on Troy’s own world-class Timberbeast Folf Course.

(Restrooms are open for the summer season only

Carnan Davis started sewing as a child. Would she have guessed at those early beginnings that she would be an accomplished quilter and one day named the Kootenai Valley Quilt Guild 2021 Quilter of the Year? Probably not. But we are proud of Carnan and her many accomplishments as we honor her this year.

Carnan was influenced as many young people are by her mother and grandmother. She started sewing by hand and then machine—sometimes without her mother’s permission or knowledge. (still to this day!) She made most of her clothes and later on those of her husband and son.

In the late 1980’s Carnan tried her hand at patchwork, making
a Christmas tree skirt. She failed miserably. So she asked her co-worker and quilting guru, Carrie Gehrke, for advice. Carrie had her enroll in a Kootenai Valley Quilt Guild quilting class and she became “hooked.”

Carnan credits most of the skills she has gained to such classes and the support of KVQG’s monthly meetings. “I enjoy the challenges of new skill scaffolding. The way fabrics play off one another in color and texture really intrigues me,” she shared. Her favorite parts of quilting are choosing fabrics for a project, challenging
herself to precision work, completing projects and most especially sewing with and encouraging other quilters.

Carnan recently served as president of the KVQG, is chairman of this year’s Quilt Show (in a very difficult year), and has also pieced the 2021 raffle quilt.  She is an invaluable asset to the guild and we

find her efforts always tireless and done with that same perfection she displays with her quilts.

Congratulations to Carnan on her honor. Be sure to plan on
visiting the 2021 KVQG Show at the Kootenai Valley Christian School Gym next week, September 11-12. Carnan’s beautiful
display of work will be there along with that of many other
talented quilters. The show will also feature several vendors and
a boutique of quilted items for sale.

See you at the show…