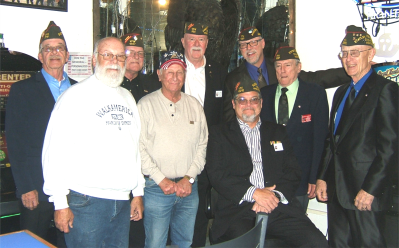 Many of the VFW’s top brass stopped in Libby for a short visit on Wednesday Oct. 16 after traveling to Eureka to help inaugurate the VA’s new ATLAS online health care access system. Photo by Moira Blazi, The Montanian.

As one of the nation’s largest heath care systems, the VA uses a wide  variety of technologies to ensure excellence in care delivery. Approximately one third (nearly 5.2 million) of the Veterans that VA serves live in rural areas and often drive great distances to access care.

VFW National Commander-in-Chief,  William J. “Doc” Schmitz, representing the 1.6 million VFW members, told The Montanian that he and his colleagues were enjoying their visit to Libby. “I lost two hundred dollars in the gambling machine too,” said Schmitz.

Darren Coldwell will be off to start his new position as City Manager of Page, Ariz., in Coconino County. He will start his new job on Tuesday, Nov. 12.

Coldwell  was born and raised in Troy, and he  was a successful business owner of Booze ’n Bait for 25 years. In addition,  Coldwell served on Troy’s School Board and he was Mayor for four years before accepting his current position as Lincoln County Administer in February of 2017.

In an email to The Montanian, Coldwell said, “I have had a great time during my tenure with Lincoln County. The Commissioners, elected officials, and staff have been fantastic to work with. I do feel like we really accomplished some very big goals. I am comfortable that the county is in a way better place compared to where it was when I started.”

With his experience in Lincoln County, and a bachelors degree in Interpersonal Communications from the University of Montana, Coldwell is well prepared and excited to meet his new challenges as City Manager of Page, Ariz.

“I am looking forward to being close to our kids and going to some of my daughter’s college basketball games. I am excited about new challenges, and trust me the I would be lying if I wasn’t excited about the weather,” said Coldwell.

Coldwell and his wife, Barbie, who works virtually for the Forest Service look forward to being closer to their two children who live in the Phoenix, Ariz. area.

Good luck in your new position Darren, you will be missed. 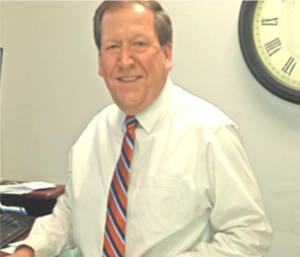 Darren Coldwell in 2018 as new County Administrator after being Troy Mayor for four years. Photo by Stacy Walenter, The Montanian.

Libby’s GEAR UP events prepare students for the future 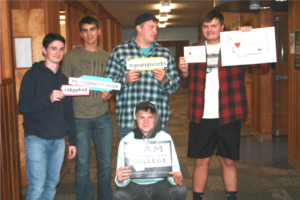 Local Libby Middle High School (LMHS) students show their support of GEAR UP as they prepare for the big next step: college. Photo courtesy of Deanna Malyevac.

Libby Loggers have had quite the busy start to their 2019-20 school year. So far, the events supported by their GEAR UP team have included National GEAR UP Week, a field trip to the Northwest College Fair, and College Application Week.

GEAR UP stands for Gaining Early Awareness and Readiness for Undergraduate Programs. It is a college and career readiness program designed to help students from low-income areas better understand and prepare for college and careers after high school.

National GEAR UP week was Sept. 21 through 27. In honor of the occasion, each day during the week a word from the GEAR UP Code (Resiliency, Hope, Connection, Purpose, and Excellence) was briefly discussed during the morning announcements. Students were presented with a couple of questions designed to encourage them to think about how each concept has impacted their life and how each can be used to aid them in their success.

To help start conversations about college between students and LMHS teachers and staff, GEAR UP provided all students with a BINGO card listing various colleges, universities, and college experiences (e.g. took out student loans, played a sport in college, etc.). Students collected signatures on their cards throughout the week and will soon be receiving prizes for turning in cards and BINGO blackouts.

As in previous years, Libby GEAR UP coordinated and funded a field trip for LHS juniors and seniors to attend the Northwest College Fair in Kalispell. The sixteen seniors and thirty-one juniors who visited the fair at Flathead High School showed interest in a wide range of institutions both in and outside of Montana, as well as various military branches. They also showed interest in a wide range of academic areas including law, psychology, automotive, medical, cosmetology, plumbing, HVAC, biology, sociology and more. Students were able to explore the fair for an hour before leaving to have lunch provided by GEAR UP from Chick-fil-A, and they were back in school before the last period began.

The week following the college fair, LHS seniors were able to participate in Montana College Application Week (MTCAW). All seniors were eligible to have one application fee waived or deferred from one of the twenty-six participating colleges and universities throughout Montana. The GEAR UP team encouraged seniors to apply and set up times to assist them in doing so.

The university that was most commonly applied to by Logger seniors was the University of Montana (Missoula), topping out at eleven applications. Students who submitted applications during MTCAW will be entered to win a prize from GEAR UP.

On Wednesday, Oct. 16, the Yaak School class was treated to a fun field day by a local Libby Outdoor Educational Instructor and their new teacher Sabre’ Alderete.

The class went over basics of identifying deciduous and coniferous trees, shrubs, and forbs. They studied a bit about fall birding, talked a little about animal tracks, and went over the rules of leave no trace practices too. The group then headed to the field just as the sun came out and brilliantly lit up the forest surroundings.

The student researchers spotted a small flock of cedar waxwings, black-capped chickadees, and a raven, as fish rose in a small private pond. The little explorers enjoyed seeing a beaver dam, and found a tiny mushroom stashed by a smart red-squirrel. The kids checked out several tracks, and together the teachers and students identified approximately 25 species of vegetation and trees.

The instructor showed the kids how to count rings in a stump, and age a tree. The children were taught to never leave trash in the woods, and they even picked up some trash along the roadway. The kids entertained the teachers with stories about their woods experiences and their favorite animals and birds.

A good time was had by all.

Photo of event participants by Brian Baxter, The Montanian.

On Friday, Oct. 11 Libby Elementary School (LES) entered a lockdown state at approximately 12:40 p.m. due to the presence of an unknown man on the property. Children were still allowed recess, but it was in a fenced area with extra supervision.

Law enforcement was notified of the man by LES and they were soon on the scene to investigate and patrol the area surrounding the school.

Approximately three hours later, at 2:57 p.m., LES made a Facebook post stating the man had been found and identified by the police. He since has been trespassed from the school, this means the man can no longer be on school grounds without the risk of arrest or further charges.

Although the situation was concerning, the school day ended without incident.