New Business began with consideration of two new business licenses. The first one was for Sky Walkers Drone Service, LLC owned by Bryan and Crystal Denton of Troy. Crystal Denton explained that their business sells pictures, videos, and is capable of filming the beautiful sunsets of autumn, Kootenai Falls views, and many other aspects of drone filming. Mayor Carr suggested that the council might want to wait until all council members were present to vote on this business license. T.J. Boswell was not present at this meeting, so the council voted to table this matter until all were present.

The second business license up for consideration was for Stenros Construction, LLC. Owner, Daniel Stenros, explained that his outfit does concrete construction of all phases including finish work. After a short discussion Stenros’s new business license was approved by unanimous consent of the council.

Next on the agenda was Resolution No. 2019-770: Resolution to provide rate increase for electric utilities. Following that was Resolution 2019-771, which was connected to 2019-770 in that it resolved to amend parts of the wording of the Electric Utility Policy. The utility rate was worded to not exceed a 5% rate increase, and additional City of Troy Power & Light Rules and Regulations were slightly altered. Councilwoman Denton recommended that the new language be also put into the Budget Figures documents. The council agreed, and Mayor Carr added that Troy still has some of the lowest rates in Montana.

There was no old business, and the council moved on to approving City of Troy claims. After reviewing seven pages of claims, the council discussed and approved the reimbursement for Christmas decorations at the park, which was a Donation, as well as an anonymous donation of $3,700 to the city for the museum area lighting systems, which was also approved.

The next phase of the meeting concerned reviewing past meeting notes from Aug. 21 to Oct. 16. Councilwoman Kelsey gave an update on planning, zoning, and potential community development block grant funding that was discussed on Sept. 18. She mentioned that she had been in touch with Farris Olsen, who worked with the Heart of the Rockies Program in Lincoln, Montana and other locations. Councilwoman Kelsey shared that she was working with Olsen and setting up a process where they would meet with locals about economic development and ask them to contribute their visions for the future of smaller communities in Montana. Olsen will be setting up a booth at the W.F. Morrison Elementary School 4H Christmas Bazaar on Sunday, Dec. 1 in Troy from 8 am to 5 pm.

Mayor Carr brought up and enumerated incidents of vandalism plaguing the parks and museum areas. He suggested the city consider installing additional new security systems, cameras, and game cameras so that the vandals could be apprehended.

Carr also suggested forming a cemetery committee to help plan, organize, and additionally help out to maintain the cemetery.

Clint Taylor’s power and light crews have been busy dealing with trees on lines from recent wind storms and dropping lines for tree fallers, as well as checking out a fire call on McDougall Court.

Dave Norman’s city maintenance crews have been working on pouring concrete in front of the bathroom at the boat ramp. They also installed 900 feet of pipe and five  hydrants at the cemetery and burned numerous brush piles.

The Troy City Council Meeting was adjourned at approximately 8:15 p.m.

On Nov. 19, Lincoln County Democrats held a lunchtime presentation and discussion at Aunt Ts Coffee Corner with Monica Tranel, candidate for Montana’s public service commission (PSC). Tranel is one of three democratic primary candidates for the District 4 seat. There are also two republican primary candidates, but the filing deadline isn’t until March 9, 2020. Primary elections will be held on June 2. The PSC is a five person board that  regulates energy, telecommunications, water/sewer, transportation and pipeline utilities in the state. 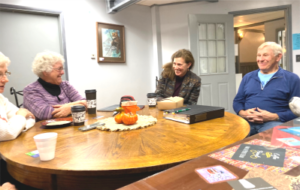 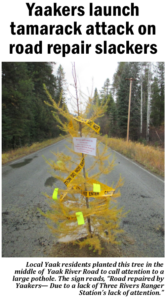