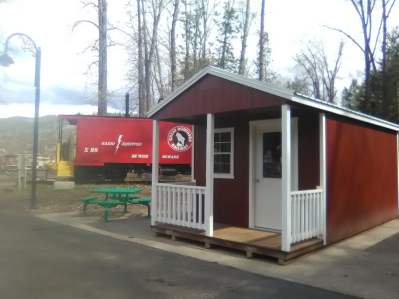 The first two items on the agenda of new business were addressed immediately. The first was consideration of approval for a new business license for Tearsa Kidwell. Kidwell is starting a cosmetology business in Troy. After a brief discussion and several questions, the council approved Kidwell’s request.

Next up was a request by Abe Becquart of Troy for a business license to perform residential construction under the business name of Kootenai River Building. The council also approved Becquart’s request.

Foreman, Dave Norman’s Public works Department has been busy doing their part to help out the recent efforts for the new museum building and new Chamber of Commerce building and site. Crews limbed trees, moved sign boards, put a new metal roof on the new museum building and painted it as well. Clint Taylor, Power Manager, also had crews cut branches, work on sign lights, run wiring for new buildings, and work on the ceilings. Those crews also replaced a window in the caboose, and moved the kiosk.

In a email to The Montanian, Sharee Miller, Chamber Treasurer, said, “The building was not donated but the site, electric lines, and phone lines were prepared by the City of Troy. The internet lines and internet service is being donated from Montana Sky. The interior electric work is being donated by Libby Electric. The desk and chair have been donated from Manahan’s Furniture. The electric hardware and general hardware have been donated by Gambles Hardware. The Computer was built and discounted by All Systems Go. Lincoln County has donated the purchase of a printer and insulation. There may be more generous donations as we shoot for the grand opening ribbon cutting on June seventh.”

The council had a thorough discussion on Ordinance 2019-761: First Reading of the Troy Sewer Policy. Members approved the second reading, and announced a Public Meeting to be held on sewer policy in May.

Mayor Carr gave a quick update on Pine Tree Plaza, and stated that progress with the paperwork is being made. Carr also thanked dedicated employee Darren Caldwell for all the work he has been putting in on that issue despite encumbering physical circumstances.

The meeting was adjourned at approximately 8:50 p.m.