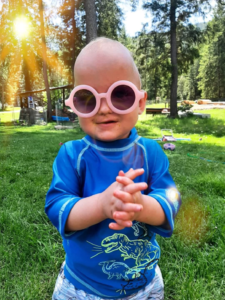 As mentioned in the June 23rd edition of the Montanian, Kayla’s Ride—a motorcycle rally to support area youth in need—
will now be utilizing some of the monies raised on this year’s ride to help a young boy from Troy and his family with medical bills.

Jerry and Maurica Erickson’s son, 15 month old Wilder, was diagnosed with Sagittal Craniosynostosis, which is when the
sagittal suture that runs from a baby’s soft spot to the back of the head closes too early and causes the baby’s head to grow long and narrow.

Wilder went in for a 7-hour surgery in Kalispell on the August 25 where dissolvable plates and screws were placed in his head. He was then expected to  be staying 3 to 4 days in the PICU for recovery. Wilder’s family is remaining Montana strong, but really could use some Montana love! Maurica (Mom) has been caring for her family and helping them get through some pretty tough times. The short version. Maurica married her love Jerry, and they had their first daughter, Claira. Everything was going well for this young family when Maurica found out her mom, Adale, had been diagnosed with brain cancer at age 47. While Adale battled brain cancer for five months, Maurica lost her job because she was taking too much time off to help care for her mom and her two little sisters. Adale was admitted to Brendan House, and Maurica drove from Troy to Kalispell every few days to spend as much time with her mom as possible. When Adale passed, Maurica (age 26) moved her little sisters (ages 6 and 8) in with her family.
The girls came with smiles and love but little else.

There is a GoFundMe account set up, Help Wilder Erickson with medical expenses, and all donations are greatly appreciated:  https://www.gofundme.com/f/help-wilder-erickson-with-medical-expenses

With the proceeds that raised the 2021 Kayla’s Ride, $600 has been gifted to the Erickson’s towards all upcoming medical expenses. Kayla’s Ride also purchased school supplies for the upcoming school year that will be donated to the local schools. 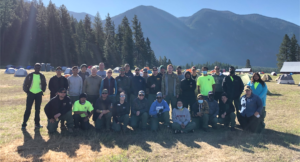