Submitted by : Brooke Stroyke, Office of the Governor 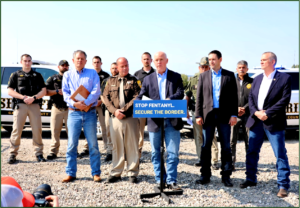 “Fentanyl-related activity is at never-before-seen levels and it’s impacting communities all across Montana,” Gov. Gianforte said. “Action is urgently needed, but the Biden administration is only letting the problem get worse. Montana will continue to respond to this crisis with the urgency it requires to protect our communities.”

In the first six months of 2022, law enforcement in Montana seized nearly twice the amount of fentanyl seized in the previous three years combined. Deaths due to fentanyl have also increased in Montana in recent years, with fatal overdoses up 1100% since 2017.

Nationwide, fentanyl activity is on the rise. According to the U.S. Department of Justice, “Mexican cartels are increasingly manufacturing fentanyl for distribution and sale in the United States. Precursors are imported from China and other countries and then pressed into pills, powder, or mixed into other drugs at massive, industrial-scale labs.” In July, U.S. Customs and Border Protection observed a 200% increase in fentanyl seizures over June.

To restore security and protect America, Gov. Gianforte and other governors last fall outlined ten commonsense steps for the Biden administration to take to bring the border crisis to an end. The governors’ request has gone unanswered.

Absent federal action, Gov. Gianforte this spring joined the American Governors’ Border Strike Force, a collaborative effort among 26 states to secure the border. Among other focuses, the strike force is working to improve coordination and communication to combat the trafficking of illegal drugs, including fentanyl.

“This spring, I joined the American Governors Border Strike Force, a partnership with 25 other states to do the job the federal government refuses to do,” Gov. Gianforte continued. “I’m incredibly grateful for Montana law enforcement rising to the challenge to keep our communities safe. They’re serving on the frontlines – executing drug busts, responding to overdoses, and holding drug dealers accountable.”

Gov. Gianforte also emphasized the importance of treatment for Montanans struggling with addiction.

“Substance use treatment and prevention programs are some of the best defenses we have to the fentanyl crisis,” the governor said. “And I want folks to know – if you know someone trapped in addiction, there are services available to help them. Reach out to us, and we’ll get them plugged in.”

Addressing the substance use crisis in Montana is one of the governor’s top priorities. In his first week in office, the governor introduced the HEART Fund which invests $25 million per year to provide for a full continuum of behavioral health and treatment programs for communities.

Erickson, Brenton K.
Charged with felony all other offenses. LCDC.

Simeone, Michael C.
Charged with all other offenses. LCJC.

Williams, Cody A.
Charged with felony all other offenses.