“Do you have what it takes?” One Troy woman proved she does. At the age of 56, Bonnie Hudlet is more active than ever, working in general construction and doing handyman jobs with men half her age. Bonnie recently was awarded first place in a Husqvarna video contest, and won a prize package that included a Husqvarna 572XP saw with a 20″ bar, technical HV (High Visibility) pants, tech jacket with a winner’s logo on it, tech short-sleeved shirt, technical forest helmet, and gloves.

Bonnie became aware of the contest after someone commented on a Facebook photo of her and mentioned that she should enter the contest. After looking at the rules, Bonnie saw that the contest was geared towards professional sawyers who were to submit a 60 second video showing that they “have what it takes.” She decided to write Husqvarna to encourage them to have a contest for people like her who were not professionals but still used saws for both work and everyday life in a rural area. Husqvarna replied and said that non-professionals were welcome to send in videos as well and they would be judged based on cutting ability, endurance, and maneuverability.

So with only 30 minutes to spare, Bonnie submitted a video on the last day of the contest. She filmed and edited the video in under 24 hours, while still accomplishing a full-days’ worth of work. Bonnie partly credits her background as a photojournalist in performing this task.
“I have to think that my photojournalist background helped me to tell the story they wanted in the 60 second allotment,” Bonnie said.

Not expecting to win, the news of the contest results came as quite a shock. Bonnie stated, “I really didn’t expect to win, but I thought if I could encourage someone else to never stop learning and trying and growing, and maybe even do some tough stuff. Do not slow down because you hit some magical age (where the) world tells us we are too old.” 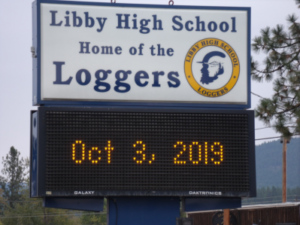 Photo by Brian Baxter, The Monatnian

Libby High School students have been extremely busy with Logger Homecoming 2019 events. However, there have also been some interesting activities going on in the outdoor educational world of Libby High. Well loved retired biology teacher Gene Reckin, teamed up with Advanced Biology teacher Renee Rose to instruct the students in the methods of measurement, recording of data, and other aspects of conducting scientific stream surveys. These surveys include measuring speed of flow, water depth, occurrences of pools and pool depth, fish habitat and type, substrate type, fish species present, and noting any sediment source problems. At the session on Libby Creek, there were many insects found in the water, and even a few fish caught by hand.

Mr. Fuller’s Environmental Science class participated in a session on Chronic Wasting Disease. State Wildlife Biologist Tonya Chilton – Radandt, Bozeman Wildlife Biologist Emily Almberg, and Veterinarian Jennifer Ramsey, all teamed up to deliver the program for the students. The disease was discovered approximately two years ago in the Libby areas. The Montana Department of Fish, Wildlife and Parks has attacked the onset of this devastating disease with a three point program which consists of killing urban dwelling infected deer near the town and sampling their lymph nodes, setting netted and baited traps on private property and utilizing capture / sample techniques, and a specialized hunt using Libby as a center point and extending out ten miles in radius. Mr. Fuller and his class were able to learn about CWD in our deer and how to collect gland samples from deer.

Some Libby Loggers students also participated in a College Application / Awareness week. The college fair visit added a little urgency to some juniors and seniors to figure out what path they will take after high school. The students wish to thank Liz and Deanna for putting that session on. It was a very busy week at the school with Homecoming and all that entails. Monday, the high school students prepared floats for the parade, and the freshman football team played Polson at 5 pm at Logger Stadium. Tuesday, Logger soccer teams had matches with Bigfork, and the volleyball teams challenged Whitefish teams at the Ralph Tate Gymnasium. Wednesday the students celebrated the proud tradition of the namesake school with a Logger Day of dressing in flannels and boots. Thursday events included an Activities Tailgate where fall participants were invited to eat at the football field prior to the parade. This tailgate was courtesy of the Logger Booster Club. The Parade / Bonfire / Pep Rally kicked off at 6:15 p.m.

On Friday the students wrapped up the school week by conducting Read with a Logger for elementary students; Class Competitions for high school and middle school students; Logger Football versus Butte Central at 7 p.m. at Logger Stadium; and of course the Coronation  of Homecoming Royalty during half time. Sports events dominated the Saturday schedule, with Logger Soccer, volleyball, and the cross country running Loggers participating in the Wilderness Run up Flower Creek at 10 a.m.