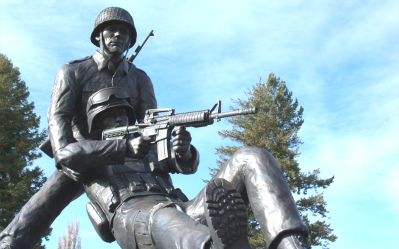 In Libby’s Riverfront Park, Scott Leonard’s bronze and copper sculpture captures the spirit of a WWII combat soldier who helps a wounded Iraq War Veteran as they exit the battlefield. The motto reads: Leave No One Behind And Never Give Up The Fight. Photo by Brian Baxter, The Montanian.

This reporter’s father landed on Omaha Beach during that invasion. My father was a hard man, but memories of him telling my brothers and I of hitting the beach in a landing craft, bring back visions of him as he gazed into the distance, took a puff of his Marlboro cigarette, and told us of the horrors of that day.

I believe he shared only to make us think, appreciate, and become better men as we grew older. And to never forget.

On May 26, 1954, then President, Dwight D. Eisenhower, signed a bill into law establishing the Veterans Day holiday. Congress amended the bill on June 1, 1954 replacing Armistice, with Veterans, and it has been known as Veterans Day ever since.

Paul Mammano, Post Quartermaster of the Veterans of Foreign Wars Post 1548 in Libby, told The Montanian, “There will be a service at twelve noon at the Libby Cemetery on (Monday) Nov. 11, it’s a Veterans Day service, where the American Legion will perform taps. The VFW will have a speaker, and wreathes will be permitted from Gold Star mothers, and anyone from local law enforcement and state patrol.”

Gold Star mothers are those whose son or daughter died while engaged in an action against an enemy of the United States or an international terrorist attack recognized by the Department of Defense.

The VFW ladies will also present wreathes at the event on Nov. 11, and all are welcome to attend. The VFW will serve a complimentary dinner for all veterans. Community members are invited to dine by donation. The Libby VFW is located at 114 W. 2nd St. and their phone number is 293-7316. The dinner will be held from 6 until 7 p.m. Their motto is, “Upholding Our Commitment To Support Those Who Served Our Country.”

At the American Legion, located at 319 California Ave. in Libby, Manager, Tia Sackett, said, “On Nov. 9, Saturday evening, there will be a happy hour from 5:30 until 6:30 p.m., to be followed by a free ham dinner for veterans, their spouses, and families. We’ll also be having live music at 8:30 p.m..” Their phone there is 293-3822. On Nov. 8, Friday evening, at 6:30 p.m. Kootenai Valley Christian School will present their 23rd annual Veterans Day Program for our community at Libby Christian Church located at 100 Kootenai River Road.

Ruth Dolezal, Administrator for KVCS said, “This tradition has been established to tangibly express to our veterans, and those in active duty, the respect and appreciation we have for their service to our country. The evening is a statement of the value we place on our freedoms, and our recognition of the price that has been and is being paid to protect those freedoms.”

All U.S. veterans and military people, and the public are invited to come. Admission is free. Each veteran or military person present on Nov. 8 will receive a gift bag in honor of their service. KVCS staff, students, parent volunteers, local Boy Scouts, and community members work together to prepare for and present this meaningful event. KVCS is located at 1024 Montana Ave. in Libby. For more information, call Dolezal at 293-2303.

At Libby Middle High School, located at 150 Education Way, there will be a Veterans Assembly on Monday, Nov. 11 at 9:55 a.m. in the gym. Everyone is invited, and veterans are encouraged to come so that students can honor them and our country. The program is put on by the LHS Student Council, and there will be a performance by the LHS choir and band. Jim May, Social Studies teacher and Student Council sponsor, told The Montanian, “Our guest speaker is Tina Resch. She is a local veteran and graduate of Libby High School. Tina’s message will be centered around her concerns for todays veterans. We encourage everyone to come listen. Students will also be presenting their personal reflections regarding our veterans and their service.”

In Troy, the W.F. Morrison Elementary School is having a Veterans Day assembly on Monday, Nov. 11 at 9:30 am. Student Coordinator and After School Program Director, Jennifer Higgins, said, “All are welcome to attend. Veterans are invited to have breakfast before the assembly at 9 a.m. with the sixth graders in the gym. We are collecting pictures of military family members for a slide show that will run during breakfast and the assembly.” For more information you can call Jennifer at 295-4321.

Thank you to all of our local veterans and active duty military members and their families.  Words cannot express your commitment and our appreciation of your service to our country.