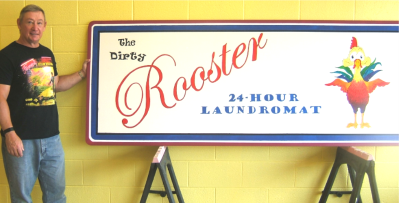 Project Ascent offers outdoor educational opportunities to underserved youth and veterans in Lincoln and Sanders Counties. Pictured are Angelo Alderete, Chairman of the Board (left) and Rob Christianson, Founder and Program Director (right),

Photo by Brian Baxter, The Montanian 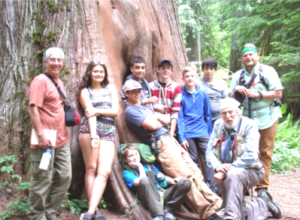 Ron and Barbara Traenkner have owned this Mineral Ave. building for about 15 years.

When he was thinking about what to do with the large and popular storefront, Ron thought, “What can Libby use?” They decided to open the dirty rooster laundromat.

“I told my wife Barbara, that it had to be bright and cheerful inside,” said Ron. And so they painted the cinder block walls bright yellow. And Barbara Traenker, who is finishing up her last year of active duty in the U.S. Army at Fort Belvoir, Virginia, designed and painted a colorful, whimsical sign. They brought in 17 new washers, 17 new dryers, and one extra large capacity washer and dryer as well. There will be a flat screen connected to Direct TV, and Ron was quick to add, “also NFL Sunday, so folks can come in and do their laundry and watch the game.” The Dirty Rooster will offer wash and fold service, two seating areas, vending machines,  and will have a safe, enclosed play area for the small tikes, with tables. When asked, Ron said “sure,” they would appreciate used toys and books for the kids.

The laundromat will be open 24 hours, with 16 surveillance cameras set up for safety. He hopes to provide a safe and pleasant space for everyone to wash their clothes at any time of the day or night.

They hope to be open by early August. 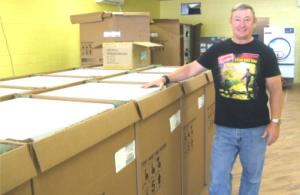 Do you like to paint? Maybe you like to use chalk pastels or make charcoal drawings? If you enjoy making art of any kind and are 18 years old or younger, then the Lincoln County Junior Fair is for you.

With over 30 pages chock-full of art and craft based categories, as well as many cooking and farming.  In the 2019 Junior Fair pamphlet,  you’re certain to find something to match your talent and interest.

Registration for the fair will be held from 8 a.m. until 8 p.m. on Thursday, July 18 in the Asa Wood Elementary gymnasium.

For Eureka and Troy registrations, call Cathy Jenks at 293-2918 for more information.

The fair will begin with a traditional parade on Friday, July 19 at 10 a.m. The parade route will be down Lincoln Boulevard in Libby. Dress up your car, bike or even yourself, join the parade, and spread some joy.

Indoor exhibits will follow the parade opening at 1 p.m. A night of performing arts will begin at 7 p.m. at Asa Wood Elementary School gymnasium. Exhibits and live entertainment are always free and open to the public. All who are interested are strongly encouraged to attend.

Saturday, July 20 will kickoff with livestock judging and the fair’s all new category, canine obedience. These categories will take place a J. Neils Park beginning at 8 a.m. Indoor exhibits will again be held at Asa Wood Elementary School starting at 2 p.m.

Try your hand at something new or stick to the same old same old. Whatever it is that you may do, the Lincoln County Junior Fair is for you,

Rotary Club brings Shakespeare in the park to Libby

The Rotary Club of Kootenai Valley will again sponsor this year’s production of Shakespeare in the Parks from Montana State University.  MSU will bring its production of Henry IV part I to Libby on Monday July 29 at 6:00 in the Elementary School Amphitheater.  This is a month earlier than usual in an attempt to avoid the smoke from forest fires.

Although based on historical events in 1403, this production of the play is set during World War I.  The themes of the play are relevant to our own time: war, the cost of war, who pays, who gains, who loses, whether the idea of patriotism is founded on a lie.

The events portrayed in the play concern a rebellion against the English King Henry IV who took the throne by force from his cousin Richard II.  The rebels are defeated at the battle of Shrewsbury.

The main characters are Hotspur, a leader of the rebels, Prince Hal, son of Henry IV, Falstaff who is old, fat and spends his life in the tavern.  Hal passes his life among the common people and seems to be wasting his talents.  However, he is preparing himself to become king which he does by getting to know real people.

LABA to place sponsored benches in

The Libby Area Business Association (LABA), a non-profit organization founded by local businesses for businesses, have come up with yet another idea to beautify the Libby business district.

Gail Burger said, “the idea originated mostly from the community. There was a need for benches downtown. So, we ran with it.”

Locals can sponsor a bench in Libby  for $80. Your name, your company name, or the name of a loved one can be placed on the bench with a plaque made by Devi of Frames Unlimited. To sponsor a bench, contact LABA at 293-5311.

Benches will be put on California and Mineral Avenues in Libby. So far, approximately 18 benches have been sponsored by local businesses and individuals.

The benches were originally scheduled to be placed around downtown during Ignite the Nites in August. However, thanks to the support of the community, LABA can place their benches much sooner.  In fact, one bench has already been placed in front of the Historic Hotel Libby.

At this point, there is no cutoff date to pay for a bench sponsorship.