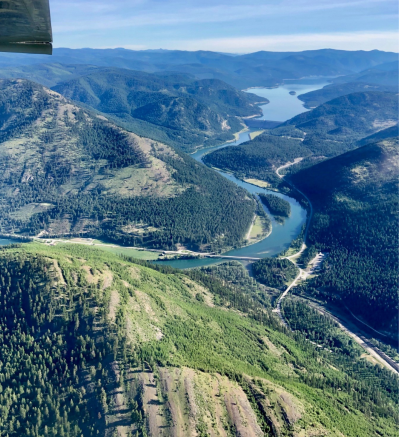 View of the mountains and river near Lake Koocanusa and Libby Dam as seen from the air during one of Yaak Valley Forest Council’s EcoFlights on June 11.  Photo by Tracy McNew, The Montanian.

Flying high on the efforts of local  non-profit, Yaak Valley Forest Council (YVFC), a number of invited guests were able to see the proposed southern reroute of the Pacific Northwest Trail (PNT)  from the air in mid-June.

The flights allowed passengers to visualize the mountainous environment and natural beauty of the proposed southern reroute to better understand the trail’s terrain and scenery without having to personally hike it.

The grant-funded flights were narrated by YVFC to point out the route. Planes and pilots were provided by EcoFlight, a company that educates and advocates for the protection of wild lands and wildlife habitat using small aircrafts.

The PNT is a 1,200 mile hiking trail that extends from Washington’s Pacific coast to the Continental Divide at Glacier National Park in Montana. It was designated as a National Scenic Trail by Congress in 2009, and now,  along with ten other major trails including the Appalachian trail, it is part of  our country’s National Scenic Trails system.

The trail leads hikers through seven National Forests, three National Parks, and through several mountain ranges including the Purcells and Cabinets. The U.S. Forest Service (USFS) holds administrative responsibility for the PNT, and a number of other groups help maintain it.

Local crews have helped maintain sections of the trail for decades. In the 1970s, led by Ron Strickland, local trails were strung together through three different states with forest service roads and even some private land to form the first version of the PNT. The Pacific Northwest Trail Association (PNTA) was then established by Strickland in 1977, and that same year, the first thru-hikers completed the trail. The PNTA continues today providing information, maintenance, and advocacy for the PNT.

The PNT runs through grizzly bear country, alpine tundra, and sensitive cultural resources, and according to a 2018 U.S. Forest Service question and answer document,  approximately 65 people per year hike long distances on the trail. At this time, no fees or permits are required to hike the PNT.

The initial National Park Service feasibility study published in 1980, recommended against designation of the trail citing wildlife impacts, possible overuse of fragile natural areas and cultural resources as concerns.  The feasibility study was  revised in 2008 prior to congressional delegation of the PNT as a National Scenic Trail.

In addition, a southern route could improve access for hikers to restock supplies, better access for  search and rescue operations and emergency services, and it still includes summiting seven peaks and maintains ample natural beauty.

Kootenai Forest Stakeholders Coalition (KFSC) have also taken up the torch to support the reroute. According to Robyn King, “It’s obvious that there is quite a bit of confusion about this issue and I think the KFSC taking this under our common ground committee process is a good step forward in resolving and clarifying the process as well as creating a robust collaborative process in which our communities in Montana can weigh in on the best route for our communities, the hikers, and all the resource issues that will be impacted by a scenic trail running through a working forest. A good solution exists and I’m confident that we’ll find it!”

The Kootenai Tribe of Idaho is proposing a reroute through northern Idaho that would connect to the southern route. They cite important cultural areas as well as concerns that the trail could become high use, defined as 520 parties per year. This number includes long distance hikers as well as local hikers, hunters, berry pickers, and other.

If the trail were to become high use, the designation would trigger more need for core grizzly bear habitat protection which could mean road closures or trail use regulations being put in place.