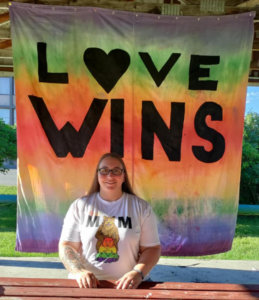 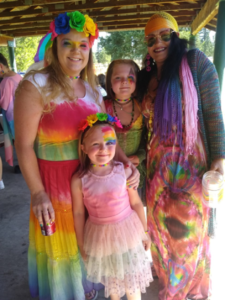 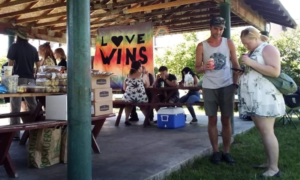 On Saturday, June 26, about 50 people of all ages, genders and sexual preference held a potluck at
Fireman’s Park in Libby. There was fried chicken and pasta salad, lots of cookies and coolers full of ice-cold water as the summer heat persisted.

There were also many smiles because this little gathering was a first for our town – Libby’s first public Pride gathering. “It’s about time, because we are really everywhere,” said Alexa, one of the attendees at the event.

Event Organizer, Becky Guerra of Libby, had noticed an online post by someone new to town on a popular and local Facebook page. The post inquired if there were any Pride events planned in the area for the month of June. “When I saw that post, I thought to myself: ‘Well there aren’t, but there are going to be now.’ If you want something, you’ve just got to step up and do it,” Guerra said.

“It’s so nice to see everyone, I thought there would be a church group or somebody [protesting],“ stated Katlyn Reeves. Troy resident, Annie Gregory, lives with her wife Maria and like many was also pleasantly
surprised at the complete lack of harassment of any kind.

“We’ve lived in Troy for six years, and I just don’t feel like it is ok to fly a Rainbow flag in my yard,” Gregory told the Montanian. “One time I had beads hanging in my car and someone wrote ‘faggot’ on my mailbox. I’m so proud of the community for coming out and showing pride in who they are today,” she added with a smile then on her face.

Guerra wanted the event to be a family-friendly and all-inclusive experience and she certainly got her wish. “I want people to know that no matter who they love or are, they should never fear being themselves. Whether you are straight, gay, transgender – whatever. Be proud of yourself. All months of the year – not
just June.”

“And hopefully, if everything goes to plan, we will be celebrating together on every weekend in June of 2022,” Guerra added. “I am eternally grateful for the community of Libby. Even those who disagreed with the event. Because they disagreed but didn’t post hate on social media and no one showed up to protest or ruin the fun. Libby has a wonderful community and I love where we live because of the people here. If this had been a different city in a different state, I probably would have never stepped forward to put this on.”

Married couple Azure and Kimberly moved back to Libby two years ago to care for Azure’s aging parents. Both women work remotely. Azure as a customer service representative and Kimberly as a software engineer. They have experienced a few challenging moments. “We had a negative experience with a local Plummer,” they shared. “He came out, and after meeting us refused to call back.” Yet they both shared that overall,
Libby has been very welcoming, they have discovered many gay-friendly restaurants in the area, and their experiences with health care have also been extremely positive.

David and Matt Hall, owners of the Evergreen Motel, were at the event as well. Matt explained that when he first came out – after meeting David at 22 – that he was “a little afraid” to do so. Though since then, in being very open and running a high-profile local business, they say it is very rare to have a negative experience. “
We keep to ourselves and run our business. There are really a lot of accepting people in this town,” Matt
told the Montanian. The couple now hopes to help with organizing some of next year’s pride events.

“As I look back now on everything, I am still really happy with how it turned out, being as last minute as
it was,” Guerra shared in an email exchange this past weekend. “We now have a Facebook group dedicated
to the LGBTQ+ community and its allies here in Lincoln County, we are planning monthly events, and will be working on next year’s Pride very soon.”

“The hope for the future is that the event grows and reaches more members of the LGBTQ+ community who may be needing to find a stronger connection,” said Guerra. “My child is an F-t-M transgendered youth. We’ve gone through with changing their name to Alexander from Hannah and they prefer they/he pronouns. It’s been hard to adjust to that big of a change, but they needed this event just as much as the rest of us. Last year was extremely challenging and now I focus hard on them as well as the rest of our youth.”

“We had at least 15 attendees that were teens and I made it clear to them that they are part of our family and we want them to know they are loved, supported, and needed. I want them to trust they can find me on Facebook at any time or just show up on my doorstep and they will have a safe place to go if ever they need it.”

“I have added so many new friends to my life because of this event and was able to let down my own fears and insecurities and come out – I have never felt freer,” Guerra shared in closing her email exchange. “And so many people are on board for helping next year that I can’t stop feeling grateful and excited when I think of them.”

Local resident and straight ally, Mary Tevebaugh, put it this way, “One of the things that impresses me is that you can’t tell who is (gay) and who isn’t, but it really doesn’t make any difference.”

Those wishing to connect are welcomed to do so by visiting Libby LGBTQIA+ on Facebook.

Save the Date—Shakespeare in the Park

Montana Shakespeare in the Parks will be touring throughout Montana and surrounding states  this summer after having to cancel performances last year.  They will be in Libby on August  24 to present A Midsummer Night’s Dream.  The local presentation is brought here by the Rotary Club of Kootenai Valley.  The play will be performed at the amphitheater at the Libby Elementary School which was constructed for the performances by the Rotary Club.

The play concerns the misadventures of young lovers in Athens.  Hermia  is told by her father Egeus that she must marry Demetrius although she is in love with Lysander.  The young lovers try to escape but are betrayed by Hermia’s friend Helena, who is in love with Demetrius.  She hopes to regain his love by telling him of the elopement of his intended bride.

In a sub plot , a group of people prepares a play  about the story of Pyramus and Thisbe to celebrate a wedding.   In another sub plot Oberon is angry with his queen and asks Puck to get him a purple flower that makes someone fall in love with the next person s/he sees.  This creates chaos among the participants of the play.

All ends well, of course, and it seems like it was all a dream.

A second play on the touring schedule is Cymbeline which will be presented in Eureka on August 19 at the Historical Village, in Sandpoint on August 21 at Lakeview Park and in Plains on August 25 at the Sanders County Fairgrounds.

Shakespeare in the Parks is a program from Montana State University in Bozeman and the plays are presented free every summer.