On Friday , January 28th, the Friends of Scotchman Peaks, in conjunction with the US forest service, , Montana Fish, wildlife and Parks (FWP) and the US Army Corp of Engineers, held its 8th annual Winter Ecology/tracking event for local 5th graders. Held out at  Timberline Campground on Pipe Creek rd. ,the event was a delightful success. “This is the 8th year we have held these events, in 14 separate school districts in Lincoln and Sanders counties” Scotchman Peak executive director Phil Hough told the Montanian.

Over 40 volunteers were involved in creating hands-on activities for the kids, and presenters from the forest service, Montana FWP, the Confederated Salish/Kootenai tribes and the US Army Corp of engineers , as well as parental  chaperones, were involved in creating this special day for Libby 5th graders. Presenters included, Loretta Hoots from the Confederated Salish/Kootenai, Keith Karoglanian , hydrologist for the US forest service, Sawyer Johnson from Montana FWP,US Forester April Rainey, and Susan James, representing the US Army Corp of Engineers, who also served as moderator for the event.

Hydrologist Keith Karoganian brought with him the snow tube he uses to measure the annual water availability of our watershed. Karoganian explained to the kids how the snow survey is conducted in remote areas, and how these measurements dictate how much water is released from Libby dam, which in turn determines the water levels of both Lake Koocanusa and the Kootenai river.

“The main thing I wanted the kids to learn is how much we can tell about an animals life and behavior from its tracks” Sawyer Johnson of Montana FWP told the Montanian. Johnson brought with him animal track molds of Grouse, Black bear, Mountain Lion  and Coyote, and created forest scenarios with them, designed to help the kids to think. “ the biggest questions the kids had were about the differences between wild “dogs” and “cats” , Johnson said.

Forester April Rainey’s presentation emphasized the renewable nature of our forest. “ I wanted them (kids) to learn to pick things to use in their lives that come from renewable resources” she told the Montanian. “ I pointed out that this very campground, (timberline) was once completely logged and has now grown back” she continued. After her presentation, Rainey asked the kids what are the top 5 things that make trees valuable to us, and their answers showed that they had been paying attention, ,Oxygen, building materials, packaging, shade, TP and homes for wildlife.

5th graders Madison Greer and Levi Harmon, both said that their favorite thing that morning was the tracking presentation.” It was kind like being a detective, Harmon told the Montanian, we looked at damage to a tree and had to figure out who did it and how big they were”.  “I liked how we learned how to tell the difference between animals by the length of their strides” Greer added. “I learned that the bobcat and lynx (strides) are about half of a mountain lion, and how to tell the difference between a wolf and a coyote by how long their strides are.” Madison’s favorite Kootenai tool was the fish spear and Levi loved the bow and arrows, and both kids loved the “roasting station” set up by volunteer Keith Meyer where the kids could roast as many marshmallows as they wanted! “Keith is very good at making hot chocolate” Harmon added with a big smile.

After lunch, the kids went out again for a forest scavenger hunt, looking for feathers, bones rocks, and something soft, bumpy, smelly hard, ugly, round curvy, old, etc., The kids returned with treasures like birds nests, and stories of snowshoe hares , then, event organizer, Susan James ended the day with a circle game, using string to connect everyone in the vast circle of life.

“ It’s amazing the passion people have for forest stewardship” said James. “ A lot of these kids already know much of this stuff” she continued “ so, besides reinforcing what they already know, it gives them a chance to share their knowledge with the newer arrivals to our area. It gives them a chance to shine. Also, a lot of these kids who have lived here all their lives rarely get a chance to get out in the woods”  Lonnie Harmon, Levi’s mom and one of the volunteer chaperones echoed these sentiments. “There are a lot of new faces, kids who have never seen wild animal tracks, and don’t know all the things we use everyday that come from trees, this is a chance for them to learn about some of the things we are losing”

For more information on this yearly event contact the Friends of Scotchman Peaks. 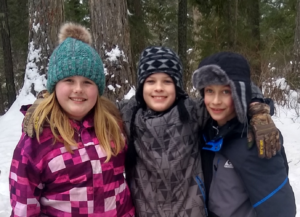 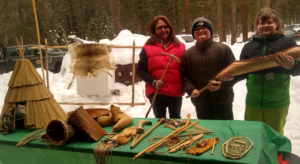 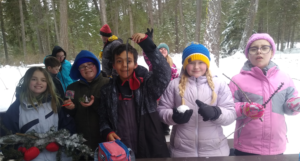