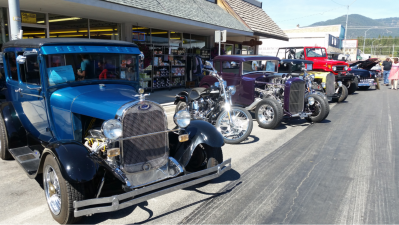 Montana Fish, Wildlife and Parks  (FWP) reported that as of Wednesday, Aug. 7, samples from sixty-six animals (59 white-tailed deer, six mule deer, and one moose) have been submitted for Chronic Wasting Disease (CWD) testing; 28 of the samples are still pending results.

CWD is a contagious neurological disease affecting deer, elk and moose. It causes degeneration of the brains and bodies of infected animals resulting in thinness, abnormal behavior, loss of bodily functions, and eventually, death.

The first local case of CWD was confirmed in May, in a deer killed inside Libby’s city limits. To date, there have been five confirmed CWD cases in white-tailed deer from the Libby area.

The first confirmed case in Libby also marked the first time CWD was found west of the Continental Divide in wild animal populations.

Last week, in a FWP press release, the agency  announced that a sixth local specimen is suspected of being positive for CWD. An initial test result was positive, and FWP is waiting for results of a second test to confirm. The animal is a road-killed doe that was collected along US Hwy. 2 near Flower Creek.

FWP will host two different public information meetings about CWD in the Ponderosa Room at Libby City Hall on  Friday, Aug. 16 at noon, and on Wednesday, Aug. 28 at 6 p.m. Hunters and anyone interested in learning more are encouraged to attend.

FWP has already created a Libby CWD Management Zone and will hold a special CWD hunt there this fall. The area encompasses approximately  a 10-mile radius around CWD detection sites.

FWP will sell 600 white-tailed deer antlerless B licenses for the Libby CWD Management Zone. The hunt will be held at the same time as  archery and general hunting seasons. Participating hunters must follow the same regulations as other hunters not only for dates, but also for weapon restrictions, and for access.

Two hours later, at 10 a.m., licenses will become available for purchase online at fwp.mt.gov. Hunters will be allowed to purchase up to two special CWD  licenses.

The hunt will be used  to test 600 carcasses for CWD, and hopefully help contain it’s spread as well.

According to FWP, all deer, elk and moose harvested within the Libby CWD Management Zone, no matter what type of license is used, must be checked and sampled within three days of harvest.

Beginning on Oct. 26, animals can be checked by FWP at either the new Libby special CWD hunt sampling station located at the Montana Department of Transportation shop on US Hwy 2, mile marker 35, or at the Canoe Gulch check station on Hwy. 37.

Hunters who quarter or bone out their animal in the field must bring the head to a station for sampling.

Prior to Oct. 26, hunters who harvest an animal are required to bring the head to FWP’s Libby office at 385 Fish Hatchery Rd. A collection site will be set up there for hunters to self-report and submit the head for testing.

During the general big game season, from Oct. 26 until Dec. 1, the Libby special CWD hunt sampling station will be open every day from 11 a.m. until an hour and a half after sunset. Hunters will only be required to stop at the sampling station if they harvest an animal.

Animals will be tagged with a unique identification number which can be  used to look up CWD test results at fwp.mt.gov/CWD. Test results are typically available within ten to 14 days. Hunters who harvest an animal that tests positive for CWD may receive a replacement 2019 license.

To reduce the spread of CWD, whole carcasses, whole heads, or spinal columns cannot be taken out of the Libby CWD Management Zone unless the animal has tested negative for CWD.

Hunters are strongly encouraged to dispose of hides, bones, and trimmings at approved landfills. If the carcass is processed within the CWD Management Zone, any brain and spinal parts must also be discarded in an approved landfill.

Ignite the Nites this weekend: car show and cruise

Auto enthusiasts of all kinds gather together each August as Mineral Ave. in Libby comes to life with an exhibit of classic and antique cars, trucks, and motorcycles.

The Igniter’s Car Club Ignite the Nites event has grown remarkably from year to year. It draws numerous car clubs and boasts an excess of 400 entries annually.

In many ways, our rigs are extensions of ourselves. The term classic has several definitions according to Merriam-Webster, including serving as a standard of excellence, traditional, and authentic. It describes a work of enduring excellence, and it’s author. Classicism is adherence to traditional standards believed to be universally valid.

These definitions can certainly be applied to cars, trucks, and motorcycles. And in many cases to people, especially to authors, or in motor-head terminology, the inventors /designers of these fine machines. Like some people, there is a certain artistic appeal, character, and individual style about them. They’re beautiful. They are classics.

For many of us, we  recall memories of those times in our rigs; the songs we were listening to, or the laughter, who we were with, the smell of the salty sea water, the mountain horizon, or the beat of the city streets.

These recollections may be part of what draws us to car shows, and what attracts many folks to the new retro car styles. Plus they’re just fun to drive and, well, classics.

Both old and new rigs will be at the Igniter’s event, along with people from eight to eighty. Car appreciators love the new retro’s for many reasons. Most of auto makers still have design lines that are reminiscent of older classics. But they have a modern look, engine, comforts, and technology of todays advances.

Maybe you toured the country with a pre-64 split windshield Volkswagen bus, hair flying in the breeze, and on the wings of freedom. Or perhaps lighting up the interstates and streets of Miami in a 60’s Corvette. Possibly, you were wheeling up rugged western Montana mountain roads in the original SUV, a Willy’s Jeep station wagon, or it’s successor, the Jeep Wagoneer. Perchance some of you were climbing to dang near the top of a western North Carolina mountaintop to watch for shooting stars in a Ford Bronco with your love. Or in southern California sportin’ around in an El Camino. Some may have flashed around New York City in a sleek Dodge Challenger. And maybe you were lucky enough to work the Rocky Mountains in a Ford Ranger pickup, a modern Forest Ranger of sorts. For all of you, there are retro models now available. And the Libby event always has lots of cool old pickups and some Harley – Davidson motorcycles for those of you so inclined.

The Igniter’s Car Club Car Show, Burn Out Contest and Cruise will be held this weekend, from Aug. 15 to 17.

The fun begins on Thursday, Aug. 15 with a High Stakes Poker Run that will have a 100% payout. To participate, register and start at 4 p.m. at the Mint Bar located at 110 Mineral Ave. in Libby. The poker run will end at the Switchback Bar & Grill at 7 p.m. followed by a  BBQ and live entertainment with Jackie Jolene and Bad Decisions from 8 p.m. until midnight.

On Friday, Aug. 16, car show registration will take place from 3 until 7:30 p.m. at the Igniter’s registration table on Mineral Avenue.

Friday night’s cruise will be held from 6 until 9 p.m. on Mineral Avenue. To avoid noise and smoke, check out their new cool down area. Neon lights and flame throwers will cruise last. Live music and a street dance hosted by the Libby VFW will follow the cruise. No open containers of alcohol will be permitted on Friday night’s cruise.

Saturday activities include car show registration from 8 a.m. until noon at the Igniter’s registration table. The car show will begin at 9 a.m. and last until 3 p.m. on Saturday. No pets will be allowed, leashed or unleashed. Bicycles or skateboards are also banned. The awards ceremony and pedal car drawing will be held at 3 p.m.

A burnout contest sponsored by Les Schwab Tires will be held at 5 p.m. at the Millpond Moto Cross Park. To attend, follow signs from Save Rite South on Hwy. 2.

Live music and a dance with Jam Shack will be held at 9 p.m. at the Memorial Center.

Preregistration for the car show strongly recommended. Registration forms can be downloaded at www.igniterscar club.com. For more information, email libbyigniterscarclub@gmail.com or call Brent Teske at 291-9311, call Dee Teske at 291-6939. Call Diane Dudley for vendor information at 295-5808. The car club also has a Facebook page.

When Igniters Car Club representative Dee Teske was asked about this years event, she said, “As Igniter’s members, a lot of time is spent trying to keep things running smooth, but we so enjoy getting to meet new folks that come to this event for the very first time and still getting to visit with our fellow car enthusiasts that come back from year to year. It definitely feels like a family reunion gathering each year and the Igniters truly are blessed to have all these wonderful people in our lives and attend our event. It truly does say something about the club which was established in 1961 that we are the oldest active car club in Montana and believed to be the tenth oldest active car club in the United States. The comradery between our members and all the car enthusiasts that come to town is a special one and we hope things continue for many years to come. A big thanks to all our sponsors.”

So all you car enthusiasts, appreciators, mechanics, drivers, and car lovers that have a common denominator of just digging cool cars and trucks, come on down to Ignite the Nites to enjoy old memories, create some new ones, and be treated to a few classics.