With the American Legion Baseball season at the midpoint. District A Foes The Libby Loggers and the Kalispell Lakers met for the first time this season

In double header action held last Friday, (b-10) at Lee Gehring Field in Libby. The Loggers would earn a split with the Lakers.

In the first contest. Early Logger Pitching would enable the Lakers to score five runs in their half of the first inning.

At the close of the second inning Libby had narrowed that lead to 5-4, but the loggers couldn’t push across any more runs. While the Lakers would add three more in their 8-4 win.

Williams would allow two hits. Both infield singles. While giving up two runs, both earned.

It wasn’t all smooth sailing for Williams. In the second and fifth innings, an alert infield and a baser loaded double play helped seal the deal. In a 3-2 Logger victory. Four Logger hurlers shared mound duty in game one. Two alone in the first inning, four walks and three hits latter; the lakers had a 5-0 lead in their half of the first inning.

Libby would narrow the gap in their half of the first Tripp Zhang would double. Then two batters later score on an error. Cy Williams would also double, sending another Logger run home. The lakers led after one inning 5-2.

Two out singles by Aiden Rose and Dylan Buckner would bring Tripp to the plate. His single would bring in two more Logger runs, and the Loggers now trailed 5-4 after two innings.

In the third with no outs and runner on first and third, Zhang would come in from his center field position to pitch. Aside from all any two unearned runs Zhang would shut the Lakers out until giving up a run in the sixth inning. Buckner would face two Lakers batters in the seventh inning.

Logger pitchers would strike out six batters while walking eight. They would hit two batters and give up six Laker hits.

The Lakers striking out four batters while walking one. He would hit two batters and give up six hits.

Kalispell committed three errors while the Loggers had one error.

Zhang would finish 3-4 at the plate including a doble and two RBI’s. he would also score a run.

In the nightcap, after a scoreless first inning, the Lakers would threaten in the second. With two outs and runners on first and third. A williams pick-off throw to first sent the runner from third Base scampering to the plate.

A throw home and a rusty Gillespie tag. And the score remained at 0-0 after two innings.

The Loggers would get on the scoreboard in their half of the inning. With 1 out, Caden Willimas would single after a flyout. Williams would steal second base. With two out Cy Williams stepped up to the dish. Perhaps or perhaps not inspired by the 1972 ABBA hit. (Treat him well) “He is your brother” Cy would single, and Caden would plate the Loggers first run after three innings. It was the Loggers one, Lakers 0.

Continued on to Page 10

Road Closures Due to Flood and Land Slides 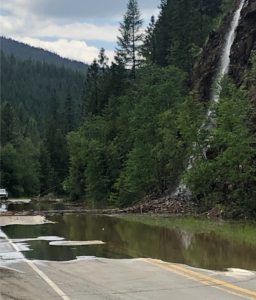 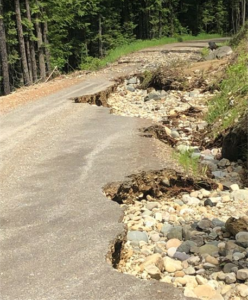 Lincoln County Emergency Management Agency also reported on June 15, Troy road closures on  Eastside Rd. from mile 6-17 as well due to the road being washed out. Just one day later on June 16, MDOT reopened S-508 with a reduced speed of 35 miles per hour at the Yaak falls area. Additional work will need to be done

Last summer, a group of Libby citizens decided to hold a picnic in the park in honor of pride month. No publicity to speak of, just a few Facebook posts and some word of mouth. To everyone’s surprise and delight over 50 LGBTQIA folks and their allies of all ages showed up to share a meal ,smiles and stories, and some sweet support.

“ Last year, honestly, all I did was book the event, the community came together spontaneously to make it happen.”, event organizer Beckie Guerra told The Montanian.

This year, Matt and David Hill, proprietors of the downtown Evergreen Motel joined Guerra along with a small committee of community leaders to take that small ,but giant step of actually hosting Lincoln County’s first ever Pride festival, on Saturday, July 9 at Riverfront Park in Libby.

Guerra, who is happily married to a man, understands what bigotry feels like. “ I spent my childhood being beaten up and bullied for my lesbian mothers’ loving each other, I watched live coverage of Matthew Sheppard and watched my mother join in fighting for justice over his murder. I was harassed and threatened for getting married to my Spanish husband because, even after 55 years of interracial marriage being legal, people still to this day hate mixed races being together.” Guerra recalled.

Finding tremendous support from all facets of the community, this inaugural festival will feature local vendors, ariel performance artists, a doggie fashion show, live performance, music, photo booth, food, beer and, a children’s area with games and stories. Although very colorful and a lot of fun, the bottom line is education.

Acting as master of ceremonies for the event, Spokane based drag artist Jason Johnson, appearing as Nova Kaine will be keeping the ball rolling, starting at 11 a.m.

“ I am there to ‘drive the car’, Johnson told The Montanian. “Folks are not going to be seeing a nightclub act, he  continued, although I will probably do a few Broadway show tunes, it’s really just all about the entertainment.”

Nova will also be hosting children’s story time. Johnson, who  grew up on a ranch in small town Wyoming, told The Montanian, “I was molded and shaped by storytellers, both of my grandmothers were schoolteachers, and they used to say reading stories to kids is like creating a movie  in their minds. I’m just the “fun aunt” telling a story I have been hosting drag shows in Spokane for 19 years, and have been confronted on a daily basis” he added “there is nothing I might hear at the festival, that I haven’t heard before.”

“ We will pick about 6 or 7 of our friendliest, most social dogs, and have a parade.” Said 4 Paws co-owner Amanda Plummer. “We’re also going to bring a kiddie pool for the pooches to cool off in and rainbow-colored dog Biscuits,” she added.

Of course, it is no surprise that this event has attracted criticism. Event participant and business sponsor 4 Pawz pet retreat received a call from an individual who  threatened to “campaign against our business,” according to co-owner Amanda Plummer. In response, they issued a statement , which reads, in part; “…We would never think to bully or harass another local business for their beliefs, their choices and /or what they do or don’t support personally, We wont respond to hate with hate, we have, after a day of discussion, collectively decided that we will stand in love.”…”the same way our pets do. They don’t take sides or stances; they don’t see race or gender. They see the kindness in how you treat them, and that’s where their loyalty stems…lets be more like our pets, or rather, more like the people our pets think we are.”

Cora Gilmore, owner of The shed, who will be providing delicious food for the event, also released  a short statement; “ We are all about inclusivity, acceptance and being a safe space for all to break bread. As a community, and country/society it seems we are more focused on our differences and refuse to see our similarities. There is always common ground for everyone at the Shed.”

Free festivities will kick off around 11 a.m., at Riverfront Park, and continue all day till about 6 p.m. Food from The Shed and beer from Cabinet Mountain Brewery will be available for purchase, as well as quality arts and crafts , and there will be live entertainment throughout the day.

Festival organizers welcome all folks to the event, and want to remind everyone that it is a non-political, no -firearms, free event, and don’t forget, dogs are also welcome!